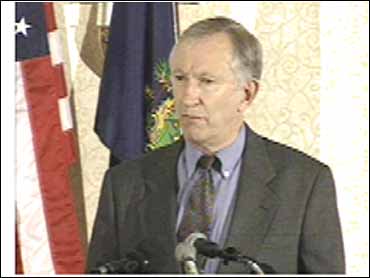 The text of Sen. Jim Jeffords' announcement Thursday in Burlington, Vt., as transcribed by eMediaMillWorks Inc.:

Anyone that knows me knows I love Vermont. Vermont has always been known for its independence and social conscience. It was the first state to outlaw slavery in its constitution. It proudly elected Matthew Lyon to Congress, notwithstanding his flouting of the Sedition Act.

It sacrificed a higher share of its sons in the Civil War than perhaps any other state in the Union. And I recall Vermont senator Ralph Flanders' dramatic statement 50 years ago, helping to bring the close on the McCarthy hearings--a sorry chapter in our history.

Today's chapter is of much smaller consequence. But I think it appropriate that I share my thoughts with my fellow Vermonters.

For the past several weeks, I have been struggling with a very difficult decision.

It's difficult on a personal level, but even more difficult because of the larger impact in the Senate and also the nation. I have been talking with my family and a few close advisers about whether or not I should remain a Republican.

I do not approach this question lightly. I have spent a lifetime in the Republican Party and served 12 years in what I believe is the longest continuous held Republican seat in history. I ran for re-election as a Republican just this past fall, and had no thoughts whatsoever, then, about changing parties.

The party I grew up in was the party of George Aiken, Ernest Gibson, Ralph Flanders, Winston Prouty, and Bob Stafford. These names may not mean much today outside Vermont, but each served Vermont as a Republican senator in the 20th century.

I became a Republican not because I was born into the party, but because of the kind of fundamental principles that these and many Republicans stood for: moderation; tolerance; fiscal responsibility. Their party--our party--was the party of Lincoln.

To be sure, we had our differences in the Vermont Republican Party, but even our more conservative leaders were in many ways progressive.

And Vermont's Calvin Coolidge, our nation's 30th president, could point with pride to his state's willingness to sacrifice in the service of others. Aiken and Gibson and Flanders and Prouty and Bob Stafford were all Republicans, but they were Vermonters first. They spoke their minds, often to the dismay of their party leaders, and did their best to guide the party in the direction of those fundamental principles they believed in.

For 26 years in Washington, first in the House of Representatives and now in the Senate, I have tried to do the same, but I can no longer do so as a Republican. Increasingly, I find myself in disagreement with my party. I understand that many people are more conservative than I am and they form the Republican Party. Given the changing nature of the national paty, it has become a struggle for our leaders to deal with me and for me to deal with them. Indeed, the party's electoral success has underscored the dilemma that I face within the party.

In the past, without the presidency, the various wings of the Republican Party in Congress have had some freedom to argue and influence and ultimately to shape the party's agenda. The election of President Bush changed that dramatically.

We don't live in a parliamentary system, but it is only natural to expect that people like myself, who have been honored with positions of leadership, will largely support the president's agenda.

And yet, more and more, I find I cannot. Those who don't know me may have thought I took pleasure in resisting the president's budget or that I enjoyed the limelight. Nothing could be further from the truth. I had serious substantive reservations about that budget, as you all know, and the decisions it set in place for the future.

Looking ahead, I can see more and more instances where I'll disagree with the president on very fundamental issues--the issues of choice, the direction of the judiciary, tax and spending decisions, missile defense, energy and the environment, and a host of other issues, large and small.

The largest for me is education. I come from the state of Justin Smith Morrill, a U.S. senator from Vermont who gave America its land grant college system. His Republican Party stood for opportunity for all, for opening the doors of public school education to every American child.

Now, for some success seems to be measured by the number of students moved out of the public schools.

In order to best represent my state of Vermont, my own conscience and principles I have stood for my whole life, I will leave the Republican Party and become an Independent.

JEFFORDS: Sorry for that.

Control of the Senate will be changed by my decision.

JEFFORDS: I'm sorry for that interruption, but I understand it.

I will make this change and will caucus with the Democrats for organizational purposes once the conference report on the tax bill is sent to the president. I gave my word to the president that I would not intercept or try to intervene in the signing of that bill.

My colleagues, many of them my friends for years, may find it difficult in their hearts to befriend me any longer. Many of my supporters will be disappointed, and some of my staffers will see their lives upended. I regret this very much.

Having made my decision, the weight that has been lifted from my shoulders now hangs heavy on my heart, but I was not elected to this office to be something that I am not. This comes as no surprise to Vermonters, because independence is the Vermont way.

My friends back home have supported and encouraged my independence. I appreciate the support they have shown when they have agreed with me, and their patience when they have not. will ask the support and patience again, which I understand will be very difficult for a number of my close friends.

I have informed President Bush, Vice President Cheney and Senator Lott of my decision.

They are good people with whom I disagree. They have been fair and decent to me, and I have informed Senator Daschle also of my decision. Three of these four men disagree with my decision, but I hope each understood my reasons. And it's quite entirely possible that the fourth one, with my independence, may have second thoughts down the road. But anyway, that's the way it is.

I have changed my party label, but I have not changed my beliefs. Indeed, my decision is about affirming the principles that have shaped my career. I hope that the people of Vermont will understand it. I hope in time that my colleagues will as well. I am confident that it is the right decision.

Q: Senator Jeffords, what do you say to those people who, only six months ago, voted for you as a Republican...

JEFFORDS: Right. I understand, and I'm sorry that I had no expectation of it.

Q: (OFF-MICROPHONE) you were his campaign chairman, obviously?

JEFFORDS: I was not the campaign chairman, but that's a small point. I believed at the time and had hoped at the time that those of us that are the moderates of the party, not just myself--and I speak, I'm sure, for many moderates in the party who had high hopes when the president spoke of education and when he gave his dedication to education--that we would be able to follow him, and I praise the president for his education package.

It will alert this nation, every student, every school, every state will know exactly how bad they are.

And that's the problem that I have with it. Because there are terrible problems out there that will have to be solved, and that is why in the budget process, I stood up and said, no, we can't give all this money back. We have too many high priorities--education, number one.

We have got to provide the resources for the president's plan. If the resources are not there, it's going to be misery in the school systems. And I told this to the president personally. So it's no secret that I have these feelings.

But I could not, after that, see the direction of the budgetary process--and you know I stood up against that, and we succeeded in getting some $300 billion extra to spend. But it's not being directed under the budget process to education.

Q: Do you feel the president has not lived up to his campaign promises?

Q: Senator, much has been made of the way the Bush White House and the Republican leadership in Congress have treated you. Has their treatment--personal treatment of you ha anything to do with your decision?

JEFFORDS: Oh, nothing whatsoever. It gets laughable at times, and you get upset with it--like Vermont, the national school teacher, those kind of things. But that had nothing to do with it. Nothing at all.

Q: When did you make your decision?

Q: When did you make your decision?

JEFFORDS: I made my decision yesterday on the way down, really. And I'll tell you why--why did you wait that long? I promised my moderates. I met with the moderates yesterday, and it was the most emotional time that I have ever had in my life, with my closest friends urging me not to do what I was going to do because it affected their lives very substantially.

I know, for instance, the chairman of the Finance Committee has dreamed all his life of being chairman. He's chairman a couple of weeks, and now he will be no longer the chairman.

All the way down the line, I could see the anguish and the disappointment as I talked. So I told them I would not make my final decision until I had time on the way to Vermont to decide, and I did leave it open. But I could not justify not going forward.