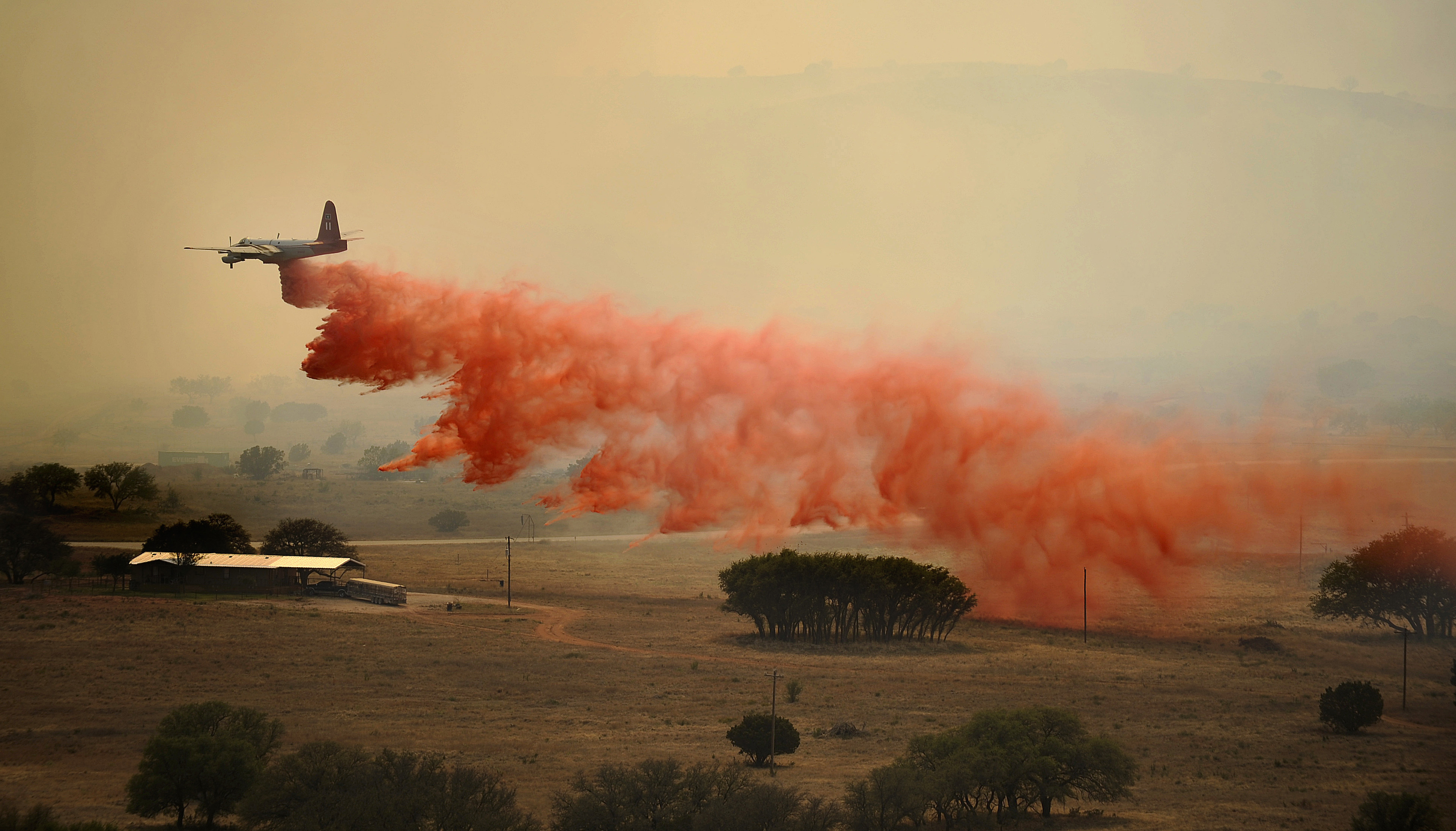 DALLAS - State officials said Tuesday that wildfire burning about 70 miles from the Dallas-Fort Worth area has blackened an area twice as big as previously estimated, and that strong wind gusts and hot temperatures would make it tougher to fight the blaze.

The fire at Possum Kingdom Lake about 70 miles west of Fort Worth has grown to nearly 150,000 acres from estimates a day earlier of about 63,000 acres, according to the Texas Forest Service.

The fire is the fifth in Texas to have burned at least 100,000 acres in the past two weeks. Most of the state is in extreme drought, and wildfires in the past week alone have burned more than 1,000 square miles of parched Texas ranchland — an area that combined would be the size of Rhode Island.

The weather was expected to complicate matters in North Texas on Tuesday, with temperatures forecast in the mid-90s and wind gusts of up to 35 mph. There was a chance of evening thunderstorms.

"Gusty winds, it's going to make any fire suppression efforts problematic," Texas Forest Service spokesman Marq Webb said Tuesday. "The public just needs to be mindful that any use of outdoor fire should not be considered."

More than 30 homes have been confirmed destroyed in the Possum Kingdom area, and the forest service says that number will grow.

Trooper Gary Rozzell of the Texas Department of Public Safety said heat from the flames of fires near Possum Kingdom on the Brazos River grew so intense Monday that cinders were sent high into the atmosphere. There, they became icy and fell to the ground in a process called "ice-capping," he said.

"They tell me it's like a roof falling in," he said.

The fires drove residents from their homes along the shore of the North Texas lake, with at least 18 homes and two churches burned. The flames reached a storage building containing fireworks on the reservoir's western shore, lighting up the night but causing no injuries, Palo Pinto County Judge David Nicklas said.

In West Texas, rugged, hilly terrain north of San Angelo was complicating efforts to bring the Wildcat Fire in Coke County under control. However, firefighters gained ground on it Monday after using "burnouts" on Sunday to clear out fuel needed by the advancing flames, according to Texas Forest Service spokesman Oscar Mestas. He said some scattered rural areas were evacuated as a precaution, but no homes were reported destroyed by the 104,000-acre fire.

Witnesses told investigators the two-seater took off from Mathis Field/San Angelo Municipal Airport on Sunday and that the two people on board, whose identities had not been released, indicated they wanted to go on a sightseeing trip over the wildfire, Lunsford said. The wreckage was found Monday east of San Angelo.

In Austin, some residents of a neighborhood in the southwestern corner of the capital city returned Monday to find charred ruins of their homes after a wildfire a day earlier.

The blaze destroyed 10 homes in the affected area and significantly damaged 10 others, and those numbers are likely to rise as fire officials continue searching the area, said Austin Fire Department spokesman Palmer Buck.

David and Kris Griffin returned home from out-of-town weekend trips on Monday to find that their house was one of at least 20 in their Austin neighborhood destroyed or nearly destroyed by a weekend wildfire.

Nearly all of their possessions went up in flames, and George, their cat of 11 years, was missing. Making their loss even tougher to grasp, the homes on both sides of theirs survived relatively unscathed.

"All the other houses got saved except ours ... we're just kind of speechless right now," said Kris Griffin. She said finding the cat was their priority, because their possessions were replaceable.

Authorities charged a 60-year-old homeless man with arson on Monday, saying he defied a nearly statewide burn ban and left a campfire untended Saturday. Fire officials say wind-blown embers ignited the blaze, which spread quickly through a suburban-like area of southwest Austin and forced the evacuation of about 200 homes.