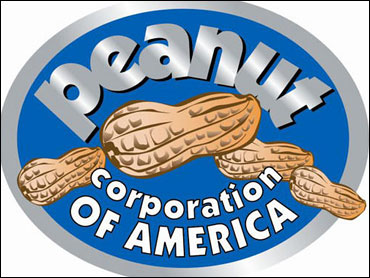 Texas health officials ordered the recall Thursday of peanut products from a plant operated by the company at the center of a national salmonella outbreak, days after tests indicated the likely presence of the bacteria there.

All products ever shipped from the Peanut Corp. of America plant in Plainview were recalled after the Texas Department of State Health Services said it found dead rodents, rodent excrement and bird feathers in a crawl space above a production area on Wednesday.

"I think I'd be safe to say it's among the largest recalls" in at least the last two decades by the department, said spokesman Doug McBride.

He said the recalls cover products the company shipped anywhere - not just in Texas.

The recalls from the plant, which operated unlicensed and uninspected for nearly four years, are the latest bad news for the company being investigated in connection with an outbreak that has sickened 600 people and may have caused at least nine deaths. More than 2,000 possibly contaminated consumer products have already been recalled in one of the largest product recalls ever.

Texas inspectors also found that the air handling system was pulling debris from the infested crawl space into production areas at the Plainview plant. The plant, which voluntarily closed Monday, was also ordered by the state to stop producing and distributing food products.

Although some of their products would include dry roasted peanuts, peanut meal and granulated peanuts, McBride said he did not know the volume produced by the Plainview plant since its opening in March 2005.

The company's customers were mainly manufacturers. McBride declined to release a customer list because he was uncertain of its accuracy. But some customers were identified on a list obtained by The Associated Press.

"We're not sure what this means," said Paul Hanson, vice president for quality assurance/contracts at Nellson Nutraceutical in Los Angeles. "We're looking into it right now."

An official at Powers Candy & Nut Company in Spokane, Wash., said his firm bought a small quantity of peanuts from the Plainview plant last year and has already distributed products containing it.

Private lab tests returned Monday showed likely salmonella contamination at the plant. Further testing was needed to confirm the results, but state health officials said Thursday that their orders are not contingent on finding salmonella.

The health department said that lab tests are being done on food and environmental samples as well.

The plant in Plainview, located in the Texas Panhandle, was run by a Peanut Corp. subsidiary, Plainview Peanut Co. It was not inspected by state health officials until after problems arose at the Georgia plant.

Kenneth Kendrick, who worked as an assistant manager at the plant for several months in 2006, said Thursday that he had sent as many as six e-mails to the state health department while he worked there.

He said his complaints chronicled a leaking roof, which he knew could be a problem because of bird excrement.

"Anything nasty you can think of comes from water off a roof," said Kendrick, who said he left the plant voluntarily.

Kendrick said his initial complaints about the plant spurred no action. Last month, he complained again to state officials after his grandchildren became sick after eating peanut butter crackers.

He disputed state claims that the state health department didn't know of the plant's existence. He said the Plainview facility had an organic certification from the Texas Department of Agriculture.

McBride said the company at one point may have had a retail outlet in Plainview that sold directly to the public.

The federal government has opened a criminal investigation into the company, and its president, Stewart Parnell, repeatedly refused to answer questions Wednesday before the House Energy and Commerce investigations subcommittee, which is seeking ways to prevent another outbreak.

State law allows the Department of State Health Services to issue such recall orders when it finds conditions that it says pose "an immediate and serious threat to human life or health."

Calls to the U.S. Food and Drug Administration were not immediately returned Thursday.