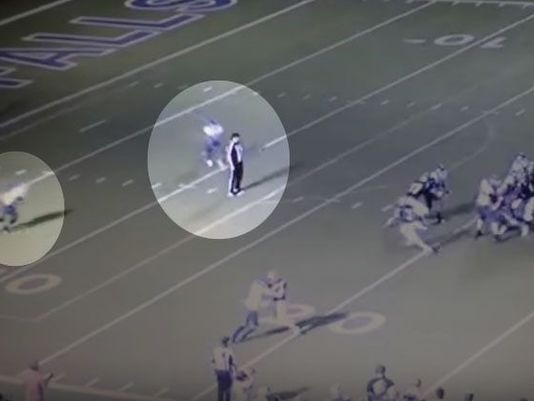 BURNET, Texas -- A former assistant high school football coach has pleaded guilty to assault for an attack on a game referee by two of his players.

The two players hit the referee during a Sept. 4 game at Marble Falls. They said they did so at Breed's direction, but Breed denied the allegation.

As CBS affiliate KENS reported, this update comes after the University Interscholastic League suspended Breed for the remainder of the 2015-16 school year and gave him two years of probation.

Based on the UIL's decision, Breed will not be allowed to coach at a UIL school until the start of the 2016-17 school year.

The hit on umpire Robert Watts came near the end of a heated game that included multiple unsportsmanlike conduct penalties and a player ejection. Video of the hit, which Watts has said caused a concussion, created a national stir when it was posted online.

One of the players is seen on video running into the back of the referee as he watched a play, and the other dove into the official. Both took running starts.

Breed has previously denied allegations that he ordered the players to smash Watts. He admitted using harsh profanity on the sideline and saying out loud that Watts should "pay the price," but insisted it was never meant as an order and wasn't directed to any players to take action.

"I never told any players to hit or take out" the umpire, Breed said. "I said a lot of things to my players to get them motivated because they were letting the officiating get the better of them."

But Breed also previously said he realized after the game his comments could have unintentionally instigated the hit.

The UIL held three public hearings on the incident. Watts, who had been accused of directing racial slurs toward players before he was hit, denies the allegations.

"One hundred percent not true," Watts previously said. "I did not make any racial slurs toward anyone (and) can't speculate why they would make something like that up."

An investigation by the Texas Association of Sports Officials found the claims of racial slurs could not be confirmed. Watts previously said he was "not well" since the incident but declined to elaborate.