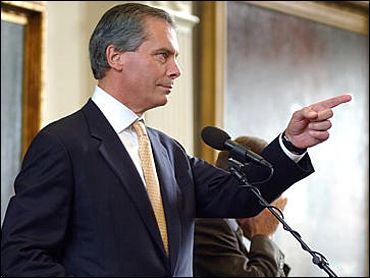 In a move reminiscent of a walkout by House Democrats 2-1/2 months ago, 11 of the state Senate's 12 Democrats fled Texas for Albuquerque, N.M., protesting a second special session on congressional redistricting.

Their absence Monday forced the chamber — and the issue — to a standstill.

The House followed, but Gov. Rick Perry immediately called lawmakers back for another session on redistricting. The second session could last up to 30 days.

"This is not about Democrats. It's about democracy and it's about civil rights," Sen. Leticia Van de Putte, Senate Democratic Caucus chairwoman, said at a news conference Monday night.

The Democrats will have to stay out for as long as lawmakers are in session for the boycott to be effective. As long as they are gone, business in the chamber stops. It takes two-thirds of the Senate's 31 members to form a quorum and allow the chamber to take up business.

Senate rules also require that two-thirds of the chamber support a bill before it can be taken up for debate. Dewhurst has said he would do away with that rule during the second session so that only a majority would be needed.

"We are prepared to stay here for the duration of this special session," Van de Putte said. "We are going to take it a day at a time."

"When either of these two requests are granted, we will be on the first flight home," Van de Putte said.

Shortly after the lawmakers took off, Dewhurst ordered the 11 who left back to the chamber.

Republicans tried to push redistricting toward a vote in the GOP-controlled House during the regular session in May, but 51 House Democrats fled to Oklahoma to block a quorum, killing the bill.

At the time, Republican House Speaker Tom Craddick ordered state troopers to retrieve the representatives. The office of U.S. House Majority Leader Tom DeLay also got involved, calling the Federal Aviation Administration to try to locate one of the Democrats' plane.

The state's attorney general, Greg Abbott, had issued an opinion that the Senate sergeant-at-arms and his deputies have the authority to arrest AWOL senators. As a practical matter, however, the missing members are out of reach and under jurisdiction of New Mexico laws, Dewhurst said.

Republicans are pressing for more seats in the state's 32-member delegation to the U.S. House. The Democrats hold a 17-15 advantage, which Republicans say does not reflect the state's increasingly Republican voting patterns.

Most Democrats want to keep the congressional map drawn by a three-judge federal panel in 2001. They say redistricting amounts to a power grab pushed by DeLay.

The Democrats arrived in New Mexico after a meeting at the Capitol. Sen. Judith Zaffirini said the Democrats received word that Perry was planning to call a special session earlier than expected to catch them off guard.

"We broke quorum to protect the people of Texas from Governor Rick Perry and his D.C. cohorts," Zaffirini said.

Sen. Ken Armbrister of Victoria was the only Democrat who did not leave the chamber. He said he stayed because he wanted to make sure that rural Texas had a voice in the process.