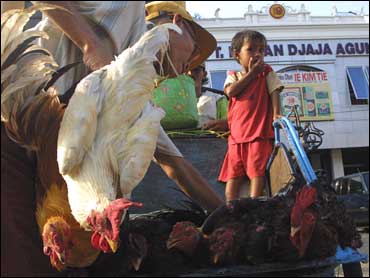 Local tests found that a brother and sister from West Java who died earlier this week were infected by the H5N1 virus, said Nyoman Kandun, head of the Health Ministry's office of communicable disease control.

The tests will be sent to a World Health Organization laboratory for further confirmation.

WHO officials so far have confirmed 33 human deaths from bird flu in Indonesia, out of 124 worldwide.

The latest victims, an 18-year-old boy and his 10-year-old sister, died Tuesday in the state-run Hasan Sidikin hospital in Bandung, the capital city of West Java, said Achmad, an official at the ministry's special task force post for bird flu, who uses only one name. They died within hours of each other less than a day after arriving at the hospital, he said.

The newest cases come as Indonesia is struggling with a different family cluster in northern Sumatra in which six of seven family members died of bird flu, the most recent on Monday. An eighth family member who died was buried before tests could be done, but she was also considered to be among those infected with bird flu.