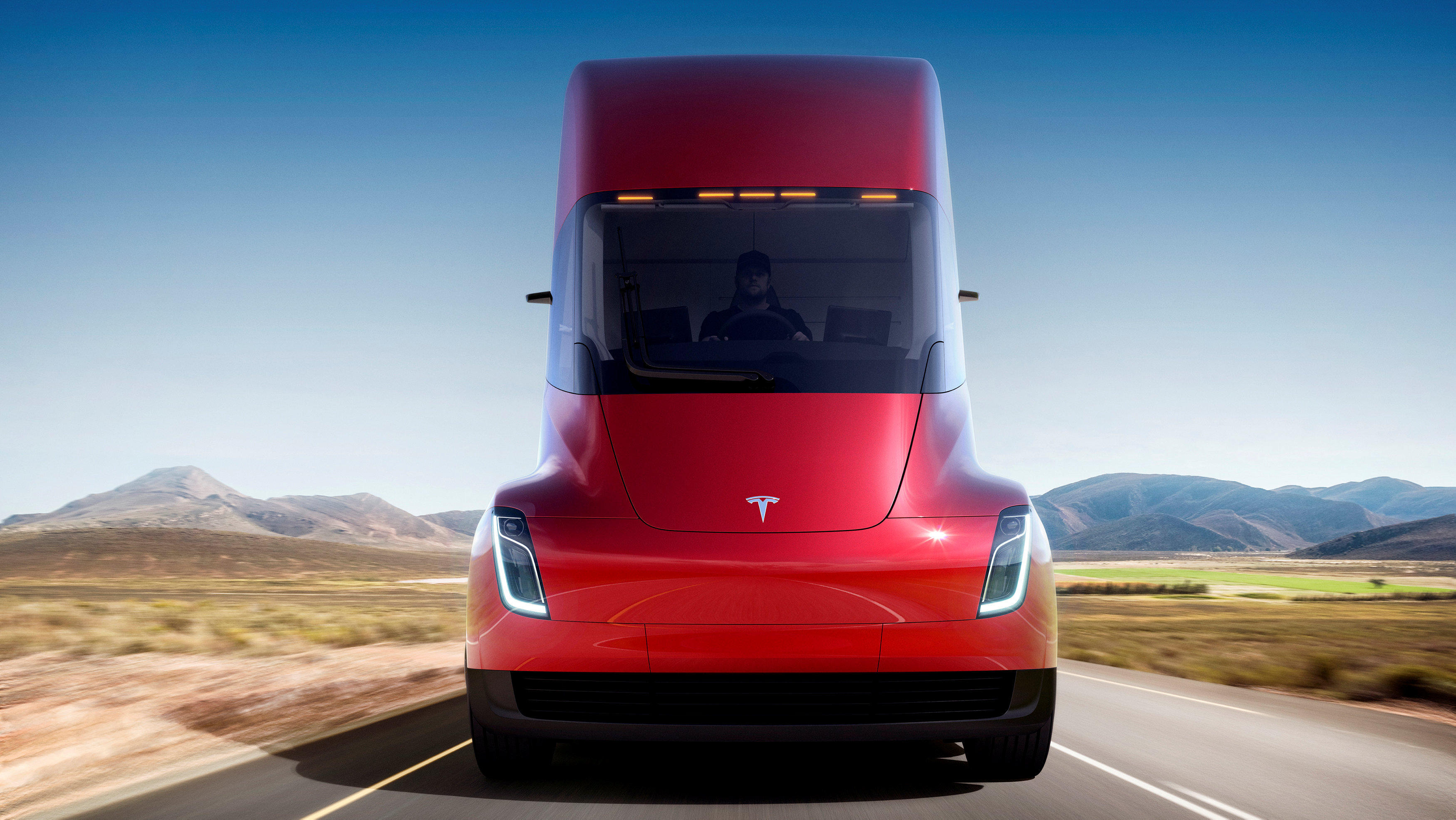 DETROIT -- After more than a decade of making cars and SUVs — and, more recently, solar panels — Tesla Inc. wants to electrify a new type of vehicle: big trucks.

The company unveiled its new electric semi-tractor-trailer Thursday night near its design center in Hawthorne, California.

Tesla (TSLA) also surprised fans with another product: An updated version of its first sports car, the Roadster. Tesla says the new Roadster will have 620 miles of range and a top speed of 250 mph. The car, coming in 2020, will have a base price of $200,000.

CEO Elon Musk said the semi is capable of traveling 500 miles on an electric charge, even with a full 80,000-pound load, and will cost less than a diesel semi considering fuel savings, lower maintenance and other factors.

Musk said customers can put down a $5,000 deposit for the semi now and production will begin in 2019.

"We're confident that this is a product that's better in every way from a feature standpoint," Musk told a crowd of Tesla fans gathered for the unveiling. Musk didn't reveal the semi's price.

The truck will have Tesla's Autopilot system, which can maintain a set speed and slow down automatically in traffic. It also has a system that automatically keeps the vehicle in its lane. Musk said several Tesla semis will be able to travel in a convoy, autonomously following each other.

Musk said Tesla plans a worldwide network of solar-powered "megachargers" that could get the trucks back up to 400 miles of range after charging for only 30 minutes.

The move fits with Musk's stated goal for the company of accelerating the shift to sustainable transportation. Trucks account for nearly a quarter of transportation-related greenhouse gas emissions in the U.S., according to government statistics.

But the semi also piles on more chaos at the Palo Alto, California-based company. Tesla is way behind on production of the Model 3, a new lower-cost sedan, with some customers facing waits of 18 months or more. It's also ramping up production of solar panels after buying Solar City Corp. last year. Tesla is working on a pickup truck and a lower-cost SUV and negotiating a new factory in China. Meanwhile, the company posted a record quarterly loss of $619 million in its most recent quarter.

Some analysts called the semi's specs "optimistic," and noted it would be hard to determine its worth without knowing more details.

"Specs and price are two things that truck buyers tend to look for when buying a truck. The Tesla truck launch was a little light in these areas," Melius Research wrote in a note. "The Tesla advertised cost per mile 20 percent below diesel would have assumptions on truck price, maintenance which is an unknown, duty cycle, value and weight/ volume of freight carried, residual value, etc." Tesla's calculations for the truck's economy also assume very cheap electricity, the note read.

Musk is being pulled in many directions. He leads rocket maker SpaceX and is dabbling in other projects, including high-speed transit, artificial intelligence research and a new company that's digging tunnels beneath Los Angeles to alleviate traffic congestion.

"He's got so much on his plate right now. This could present another distraction from really just making sure that the Model 3 is moved along effectively," said Bruce Clark, a senior vice president and automotive analyst at Moody's.

Tesla's semi is venturing into an uncertain market. Demand for electric trucks is expected to grow over the next decade as the U.S., Europe and China all tighten their emissions regulations. Electric truck sales totaled 4,100 in 2016, but are expected to grow to more than 70,000 in 2026, says Navigant Research.

But most of that growth is expected to be for smaller, medium-duty haulers like garbage trucks or delivery vans. Those trucks can have a more limited range of 100 miles or less, which requires fewer expensive batteries. They can also be fully charged overnight.

Long-haul semi trucks, on the other hand, would be expected to go greater distances, and that would be challenging. Right now, there's little charging infrastructure on global highways. Without Tesla's promised fast-charging, even a mid-sized truck would likely require a two-hour stop, cutting into companies' efficiency and profits, says Brian Irwin, managing director of the North American industrial group for the consulting firm Accenture.

But even lower costs won't make trucking a sure bet for Tesla. It faces stiff competition from long-trusted brands like Daimler AG, which unveiled its own semi prototype last month.

"These are business people, not fans, and they will need convinced that this truck is better for their balance sheet than existing technology. It probably is, based on the specs provided, but this isn't necessarily a slam dunk," said Rebecca Lindland, an executive analyst at Kelley Blue Book.