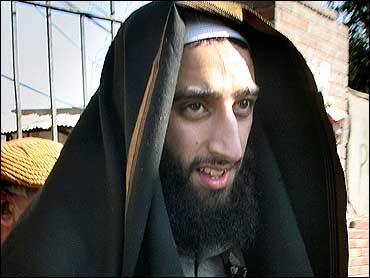 Rashid Rauf, a British suspect in an alleged plot to blow up trans-Atlantic jetliners, escaped from police custody in Pakistan on Saturday, officials said.

Rauf escaped after appearing before a judge at a court in the capital, Islamabad, said Khalid Pervez, a city police official.

Pervez said Rauf managed to open his handcuffs and evade two police guards who were taking him back to jail in the nearby city of Rawalpindi.

"We do not know how he escaped. But we do know he has escaped and the two policemen have been taken into custody for negligence," Pervez told The Associated Press.

Federal Interior Secretary Kamal Shah said he had been informed of the escape, but said he had no details.

The British government this week denied media reports that Rauf was to be extradited from Pakistan as part of a secret deal involving the arrest in Britain of two suspects wanted by Pakistan.

Rauf, who also has a Pakistani passport, was arrested by Pakistani intelligence agents in August on a tip from their British counterparts.

He has been described as a key suspect in a purported plot to blow up jetliners flying from Britain to the United States, which prompted a major security alert at airports worldwide and increased restrictions on carry-on items.

Rauf was arrested and charged in Pakistan with possessing chemicals that could be used in making explosives and with carrying forged travel documents.

The prosecution later withdrew the case against him and held him accountable only for possessing bomb-making materials and living in Pakistan without valid documents. Later, a higher court - acting on an appeal by Pakistani authorities - suspended the anti-terrorism court's ruling until Jan. 15.

A judge then extended his detention until Jan. 19.

Rauf had remained in jail awaiting a decision on a British extradition request. He had arrived in Pakistan soon after his uncle was stabbed to death in 2002, and British authorities had asked Pakistan to extradite Rauf in connection with the murder inquiry.

His lawyer, Hashmat Habib, has sought to block the move, saying the two countries did not have an extradition treaty and that Rashid had already been found innocent of involvement in terrorism.

Habib said Saturday that his client had been brought to court in connection with the extradition proceedings, but he did not know how Rauf had escaped.

The British government this week denied media reports that Rauf was to be extradited in exchange for two suspects wanted by Pakistan.

Faiz Baluch, 25, and Hyrbyair Marri, 39 - both of London - were arrested last week and jointly charged under Britain's Terrorism Act after being accused of inciting terrorism and murder in Pakistan and of having links with an international terrorist group. Both claim they are peaceful activists calling for the independence of Baluchistan, a troubled province of Pakistan.