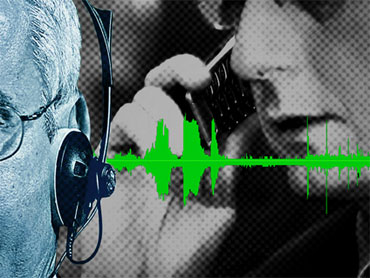 Did their voices betray them?

The discovery of an alleged terror plot against Europe owes at least some of its success to "voiceprint" technology that allows law enforcement to electronically match a voice to its owner.

The technique - which some compare to fingerprinting - can be a powerful anti-terror tool, officials increasingly believe. Law enforcement agencies are already considering how a voice database could help thwart future plots.

The reported plot against European cities, in which suspects allegedly spoke of a Mumbai-style shooting spree, has triggered travel warnings and refocused attention on al Qaeda activities on the Pakistan-Afghanistan border, where several of the voices were recorded.

The British eavesdropping agency GCHQ deployed voice identification software to help uncover the plot that officials say has targeted Germany, Britain and France - with famed sites such as Notre Dame Cathedral and the Eiffel Tower under close surveillance.

"Advances in these types of technology have been key in thwarting plots and catching suspects," a British government official told The Associated Press, speaking on condition of anonymity because of the sensitivity of his work.

Despite progress made in quashing the plot, officials still speak of an ongoing threat.

in sweeps against suspected Islamic militant networks, including three men linked to a network recruiting fighters for Afghanistan.

In one of the cases, nine suspected Islamic militants were detained in southeastern Marseille and its suburbs, and authorities turned up at least one automatic rifle and a pump gun, the officials said.

In Tuesday's other roundup, two men were arrested in Marseille and another in southwestern Bordeaux on suspected ties to a Frenchman arrested in Naples, Italy, last month accused of links to an Afghan recruiting ring.

U.S. officials believe a cell of Germans and Britons was at the heart of the Europe terror plot. Germany's ARD public television cited unidentified sources Tuesday as saying four of the Germans killed in the missile attack were of Turkish descent.

Developers of voice biometric technology say it can be more useful than traditional fingerprint analysis in fighting terror.

"You have potential for there to be a larger database for criminals' voices than their fingerprints. What are the chances that you'll get a foreign terrorist's fingerprint versus a foreign terror suspect's voiceprint?" said Germano Di Mambro, who runs Wellesley, Mass.-based Porticus Technology Inc.

Gallery: The Changing Face of Biometrics

Supporters point to several other high-profile successes in voiceprinting. Colombian drug kingpin Juan Carlos Ramirez Abadia, who used plastic surgery and multiple aliases to dodge authorities, was arrested in 2007 after the U.S. Drug Enforcement Agency matched his voice to a tape recording previously made by Colombian authorities.

But academics in the field of speech processing have offered caution.

In a 2003 paper presented to a conference in Geneva, several experts warned that there was no scientific way of identifying a person's voice with absolute certainty.

Frederic Bimbot, one of the paper's authors, said the term "voiceprinting" was a misnomer because it suggested that the technique was as reliable as fingerprinting.

"This is absolutely not the case," his paper said, noting that, unlike a persons' prints, voices are highly variable - changing according to age, health, and emotional state. When contacted through e-mail late Monday, he said his opinion had not changed.

Voices can also be altered voluntarily, he said, adding that, at present the technology was simply "not mature enough to enable definite conclusions of any kind."

Whatever its reliability, voice biometrics have drawn considerable interest from governments around the world.

Only a month after the Sept. 11, 2001 terror attacks, the Pentagon identified voiceprints as one of the dozens of priority areas in research and development, and it has been used in the field since the invasion of Iraq, according to former U.S. officials, who spoke condition of anonymity to describe classified technology.

Interpol is also interested in voice biometrics, the head of its fingerprint unit told the AP.

The private sector has already embraced the technology, with U.S. probation officers using it to monitor offenders, and Canadian call centers using it to identify customers. Israel's largest bank, Bank Leumi, says it has been using voice biometrics for the past decade to deter fraud and boost customer safety.

U.S. and British intelligence run an international eavesdropping program that gathers huge amounts of information. So big is the overload that the National Security Agency is building a massive storage center in Utah to handle the mountains of data.

"An entry-level server enables you to run 100 streams of audio against maybe 100 voiceprints," he said, noting that in some cases dozens or even hundreds of servers could be run back-to-back to comb through intercepted calls.

Aley-Raz accepted that the technology had its flaws - it is vulnerable to background noise and poor audio quality, for example, and can become confused when people start talking over one another.

"It's just another tool," he said - but one that can point terror-hunters in the right direction.
By Associated Press Writer Raphael G. Satter; AP Writers Paisley Dodds, Frank Bajak, Tia Goldenberg and Melissa Eddy contributed to this report