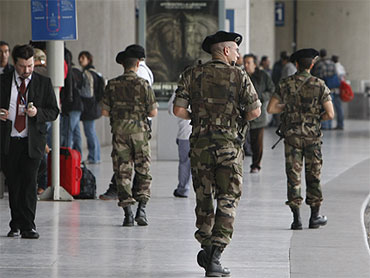 Two men were arrested by anti-terror police in Marseille and a third person taken into custody in Bordeaux for alleged involvement in a ring supplying false papers to extremists returning from Afghanistan, according to a Reuters report.

Contact information on the three was found in the possession of Ryad Hannouni, who was arrested in Naples, Italy, in possession of a bomb-making kit.

Nine others were arrested in a separate operation in Marseille and Avignon targeting a "suspected Islamist network," police told CBS News. Firearms, including a Kalashnikov assault rifle, were seized in one of the searches.

Police said searches in that operation were still ongoing, but there has been no confirmation that the operations were related to the broader European terror threat or a specific threat against France.

Police said the two sets of arrests were unrelated to each other.

Pakistani officials now say eight German militants, believed to be training for terror missions, were killed in that strike. German officials say only that they're investigating the reports.

U.S. officials believe a cell of Germans and Britons are at the heart of a terror plot against European cities - a plan they link to al Qaeda leader Osama bin Laden - and are believed to be hiding in that region.

It's not clear how many terrorists may be involved or where they are. While security officials call the threats "credible," there is still no hard information about timing or targets.

"We're in the middle sequence of this plot, but we know it's underway," said CBS News national security analyst Juan Zarate. "We know it's been directed by al Qaeda, but we don't know when it may be executed, and we don't know who is going to perpetrate it."

According to an ABC News report, possible targets include pre-security areas, such as ticket counters, in at least five major European airports.

The strikes in Pakistan came on the heels of a U.S. warning for Americans traveling in Europe to be on alert for possible terror attacks, on suspicion that groups linked to al Qaeda were plotting to target tourist magnets in European capitals. Japan also issued a travel warning.

Germany's Interior Minister Thomas de Maiziere, however, insisted there was "no reason to be alarmist."

However, the German police agency responsible for terrorism investigations, the Federal Criminal Police Office, said as many as 220 people have traveled from Germany to Pakistan and Afghanistan for paramilitary training, and at least 70 have received it. A Pakistani intelligence official last week said there are believed to be around 60 Germans in North Waziristan now.

Konrad Freiberg, head of the German police union, told the Passauer Neue Presse in its Tuesday edition that ever more Germans are traveling to Afghanistan and Pakistan for militant training, "and a large number of them have returned and are living here."

The threat is being viewed differently by Washington and European capitals, and some analysts said it was a matter of approach. Such differences have played out repeatedly in the years since the 9/11 attacks on the United States, they said.

British intelligence prefers to keep targets under surveillance as they plan attacks, often waiting until the final stages to intervene - hoping to gather evidence and to gain information about contacts in Britain and overseas.

"That cuts significantly too close to the bone for the United States. They are not happy to let plots run for too long," said Tobias Feakin, director of national security and resilience at London's Royal United Services Institute, a military think tank.

In Germany, the homeland security spokesman for the main opposition Social Democratic party said there is a different security culture in Europe and the United States.

"After 9/11 there were almost daily warnings of new threats in the U.S. which - thank God! - never became a reality" in Germany, Dieter Wiefelspuetz said.

In Washington, State Department spokesman P.J. Crowley said Monday that the travel advisory was issued because of extensive evidence of a plot.

"We felt, having tracked intelligence over a lengthy period of time, it was appropriate to issue this alert at this moment," he said.

"We specifically have said continue with your travel plans, but just be cautious because we are aware of active plots against the United States, American citizens and other allies around the world."

British police used sniffer dogs to patrol subways on Monday, while soldiers and mounted police were dispatched to two major churches in Paris - Notre Dame and Sacre Coeur. French paramilitary troops were also seen patrolling around the Eiffel Tower - which has been evacuated twice in recent weeks for unspecified threats.

The U.S. missile strike in Pakistan killed five German militants taking shelter in a house in the town of Mir Ali in North Waziristan, a known hub for foreign militants with links to al Qaeda, Pakistani intelligence officials said.

The terror cell said to be behind the Europe plot - eight Germans and a Briton - were believed to have been in hiding in the region. A second Briton was killed in a U.S. strike last month.