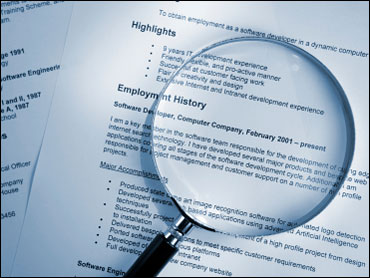 You would think being a self-motivated worker would be a benefit, right? And who wouldn't want a team player in their company?

Of course these are positive traits -- until you write them on your resume!

There are five popular catch-phrases that should never make it into your resume. Watch out - yours is probably littered with them.

But on "The Early Show on Saturday Morning," career adviser Liz Ryan, CEO of AskLizRyan.com, spotlighted the things you shouldn't call yourself on a resume - at least, not without backing up the description with concrete examples. In fact, she says those examples could speak for themselves, without your actually using the terms you should avoid.

The idea, Ryan says, is to stand out - and using terms everyone else does hardly accomplishes that.

Seafood Feast From Down Under

Poll: Many in U.S. ignorant of July 4th history

This is all-the-more important in this still-tight jobs market.

Some of the typical or cliché phrases used in resumes

"Results oriented professional" is probably the biggest one used, and it's meaningless! You're talking about yourself, so why go into this weird robotic language that doesn't describe much about yourself? For example, you might say, "I got into journalism, because l like to tell compelling stories." But you wouldn't say "I have a proven track record in the newsroom."

Where do these phrases come from?

They come from a military lingo that the American management system copied. The structure for business management is inherited from the military. We adopted some of their business lingo and policies and procedural manuals. The problem is -- they don't fit us very well.

But aren't these phrases describing things employers want in a candidate? Why is that so wrong?

Don't just tell someone you're special, give examples of what you do and what you enjoy. Anyone who says he or she has "excellent communication skills" evidently doesn't! Because, if you had them, you wouldn't use trite words to describe those skills.

How should you better describe your skills then?

It should be done in teeny-tiny mini-stories. Instead of saying strong communication skills, say you built the company's newsletter from scratch. That fits within a bullet point and it says a lot about you. And the phrase built from scratch is colloquial, so employers like that because it says you're comfortable in your skin. It's better to tell a little story that is more colorful than just a regular cliché. It's grabbier than the common and trite phrases. Saying you "work well under pressure" as a journalist in a newsroom isn't as smart as saying "kept calm during daily coverage of earthquake crisis" - that way, prospective employers see it in their head, and that makes it graphic, visual, and they want to meet you. You're coming through the language on the page. So again saying you're "financially savvy" won't be as effective as saying "spent four days tracking down a financial leak." Using that approach is more of a right brain approach (as opposed to the left brain): It makes your heart beat faster and gets an emotional reaction to your skills.

But aren't people using boilerplate terms because they're short and pithy? Resumes aren't usually more than one page.

Actually, a two-page resume is OK these days, but we can't go to three. And the two-pager has to be WORTH two pages. We can be pithy and succinct; we just have to work a little harder to get there. Instead of saying mundane lines like "excellent working with customers," we can say "saved our biggest client who was ready to leave" It's not stating you have potential ability, it's giving concrete examples of when your skills have worked. Don't say you have "strong negotiation skills" -- give examples of things you have already done.

You really have to do the work make the world's shortest story about yourself. It cannot be a paragraph, but it starts by not standing back and saying what you think of yourself. Employers read all the time: "My friend says "I use my time effectively, I'm a team player," etc." Tell what you did already.

Most job seekers are usually saying their objective is "to get a good job and advance my career," etc. But objectives are important, because employers don't understand anything about you, but you can tell a story and sum up who you are and what's to follow. That's what the objectives or summary areas do. It could be a summary telling a bit about yourself (i.e. "I became interested in journalism in college and ever since, I was compelled to tell stories that capture an audience's attention.") It doesn't have to say, "I'm a good communicator." Take a more active approach. And these areas should show that you're a good communicator right, there in your story.

The objectives area is useful; just jazz it up and make it real and visual, so employers really see you. I call them Dragon Slaying Stories: Here's what the dragon looked like, what it smelled like, and I conquered the problem, and I can tell you how I did it. It's very concrete or visual, and not philosophical.

What is a major mistake people make on their cover letters/resumes?

A huge mistake people make is applying online for a job and their cover letter and resume go into a black hole. Resume websites are black holes. There are way too many resumes being sent, and employers don't look at them. If you see a job online and you read the job description, don't apply through the front door (it's death!) Get on Linked In and get the key person's name at the company. Write to him or her and completely avoid Human Resources -- because it is the enemy. They don't care about you. I can say that because I was in HR for 20 years, so I know about this. They just want to match you bullet-by-bullet to any job description. So you want to research the company first, then find the name of the boss and write him or her a letter. You're cover letter should talk about the pain this employer is in (because they wouldn't be hiring unless they needed to end their pain and solve their problem somehow.) You tell them how you can deal with their pain and make it better, how you've got the experience they need because of these examples -- and if they have a moment to chat by phone, here's your contact info. This always conveys the message to employers that this is someone you need to meet! And you avoid the black hole.

What is major cover letter mistake?

People write the whole thing about what they think about themselves. It's too narcissistic. I'm this, I'm that -- well congrats, but tell me what you did in concrete terms and let me evaluate whether you're savvy, smart, strategic.

My favorite in cover letters is when they say, "It would be a very wise decision to hire me." Well, OK -- but that's MY decision to make, and overall, that's insulting to me! I know my organization and I know what I need. The job in a cover letter is to talk about the company, not ourselves. We need to go do a little research about the company first. So, don't go into a coma: Cover letters are not just a brown paper wrapper for the resume. Pay attention and enable employers to see your brain activity.