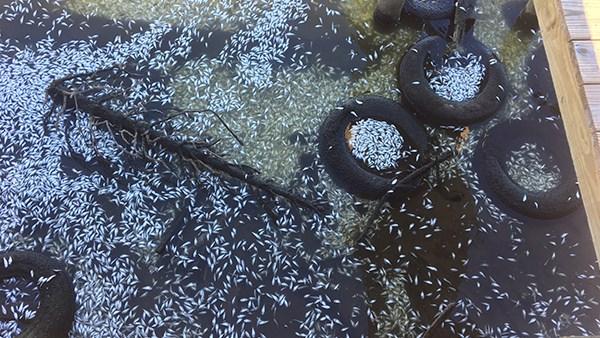 FALLS RIVER, La. -- Officials say a cold front is responsible for tens of thousands of dead fish washing up along the banks of the False River in Louisiana.

A biologist with Louisiana Wildlife and Fisheries, Brian Heimann, tells CBS affiliate WAFB that a cold front came through the area this week and caused the shallower areas of the lake to lose oxygen.

“When you have a front roll through, it can pull the bad water up to the surface. Threadfin Chad swim in open water and are tender. They are typically the first ones to succumb to it,” Heimann said.

Video from WAFB shows the lifeless fish drifting in the water along the river bank and under boat docks.

The vast majority of the dead fish were Threadfin Chad. Heimann says the False River is overpopulated with the species, and officials are already working to control the fish.

“This is just nature’s way of taking care of it,” Heimann said.

There’s no word on who’s going to clean up the mess.