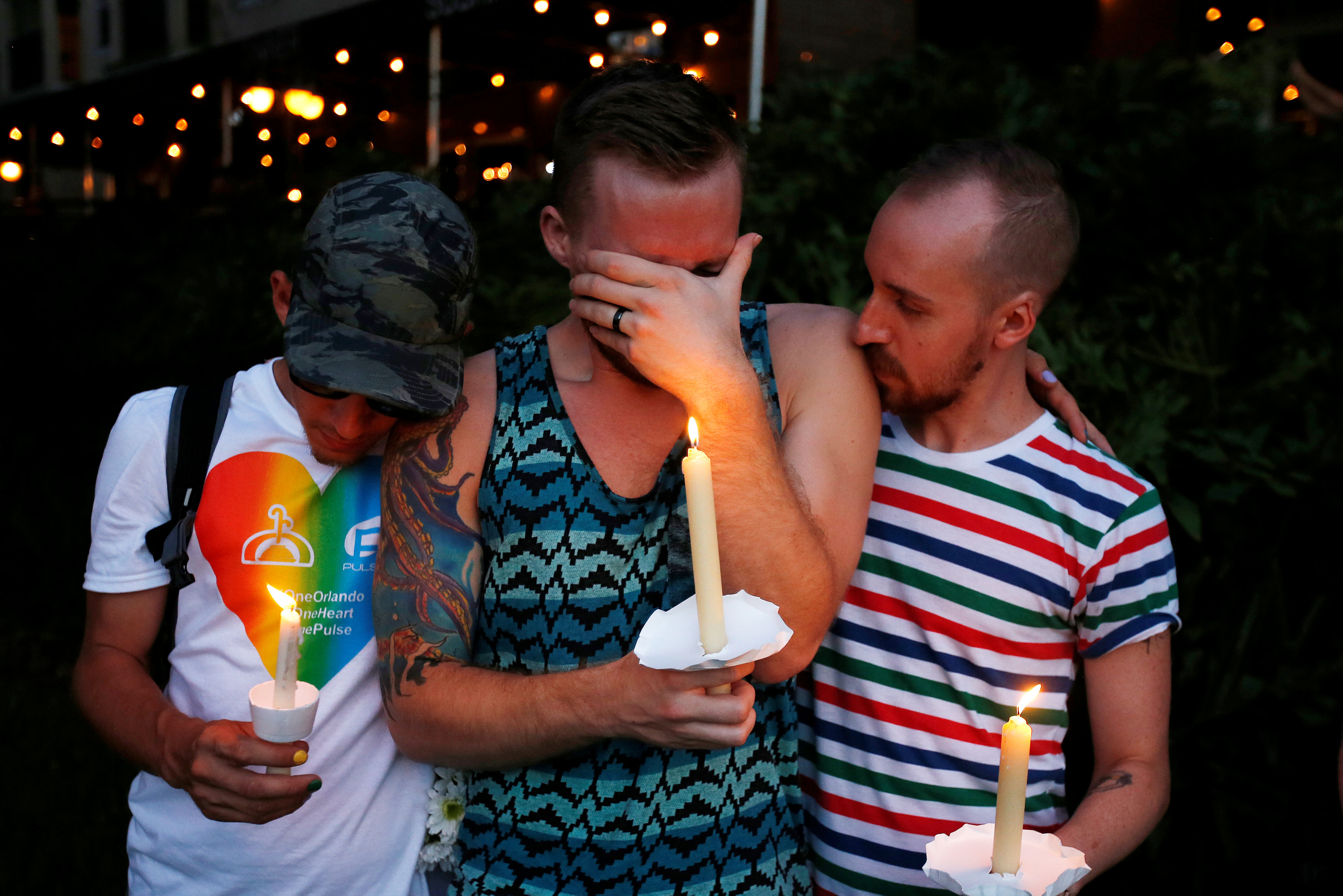 ORLANDO -- Tens of thousands of people in central Florida held up candles around a lake in the heart of downtown Orlando as the names were recited of each of the victims who died from the Pulse massacre just a week ago.

People chanted "We remember them!" after the names were recited at Lake Eola Park Sunday night.

Forty-nine people were slain and 53 were injured during the massacre at Pulse. The gunman, Omar Mateen, was killed in a shootout with police.

The candles being held by participants created a ring of fire around the lake.

Organizers estimated that as many as 50,000 people attended.

The park was filled with people holding white flowers, American flags and candles. One of those people attending, Traci Hines-McKenzie, said the timing of the rainbow was perfect.

At the end of the candlelight vigil, they chanted "One Orlando," ''Orlando United" and "Somos Orlando," Spanish for "We are Orlando."

Around the city, people left balloons, flowers, pictures and posters at a makeshift memorial in front of the city's new performing arts center and at Orlando Regional Medical Center where 49 white crosses were emblazoned with red hearts and the names of the victims.

The crosses were built by a Chicago carpenter with a history of constructing crosses for victims of mass shootings.

Greg Zanis drove from Illinois to Orlando last week and installed the crosses at the medical center, where many of the 53 shooting victims who survived were taken for treatment.

He said Sunday that the crosses are a message for people of all faiths: "Quit judging and start loving."

At the Parliament House, a gay club and resort near downtown Orlando, the music stopped as patrons paused for a moment of silence at 2 a.m., the time Mateen started shooting at Pulse just a few miles away.

In the heart of Orlando, at First United Methodist Church, Reverend Tom McClosky started Sunday service with words of support for the LGBT community.

"My faith says that one day all will be equal," McClosky told CBS News correspondent David Begnaud. "God doesn't show partiality toward any group of people and yet loves all."

"We are hurting. We are exhausted, confused, and there is so much grief," said Larry Watchorn, a ministerial intern, during a sermon at Joy Metropolitan Community Church in Orlando, whose congregants are predominantly gay. "We come to have our tears wiped away and our strength renewed."

Megan Currie, a Joy Metropolitan Community Church member, said during a Sunday morning sermon that Mateen's attack was an effort to put fear in the gay community.

"This was a hate crime and this happened because someone was homophobic," Currie said.

Florida Gov. Rick Scott described the attack as "devastating" while praying at the First Baptist Church of Orlando.

He said the gunman targeted "two very vulnerable populations." "But here is the positive out of it ... people have come together," Scott said. "There are so many people who have done so many wonderful acts."