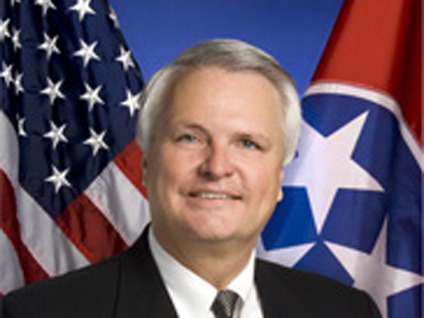 Tennessee Lt. Gov. Ron Ramsey, a Republican competing in the GOP gubernatorial primary, said on July 14th that he is unsure if Islam is really a religion, suggesting that it could be a "cult."

As TPM DC, which reported on the video after it was posted by the Nashville Scene, notes, Islam is the world's second-largest religion.

Asked about the "threat invading our country from Muslims," Ramsey first said that he is "all about freedom of religion," proclaiming fealty to the first amendment to the Constitution. But he went on to add that "you cross the line when they start bringing Sharia Law in the state of Tennessee, the United States."

"Now, you could even argue whether being a Muslim is actually a religion, or is it a nationality, way of life, a cult, whatever you want to call it," Ramsey said. "But certainly we do protect our religions, but at the same time, this is something we are going to have to face."

It is not clear what Ramsey's suggestion that Sharia Law is being introduced in the United States, though he seems to be tying it to a move to open a Muslim community center in Hamilton County. (He calls it a mosque.)

In an email to TPMDC, Ramsey wrote that "my concern is that far too much of Islam has come to resemble a violent political philosophy more than peace-loving religion. It's time for American Muslims who love this country to publicly renounce violent jihadism and to drum those who seek to do America harm out of their faith community."

You can see Ramsey's comments at left. His discussion of Islam starts shortly after the 3:00 mark.The video includes a cut, though his full response to the question appears intact and Ramsey's campaign did not take issue with the recording.