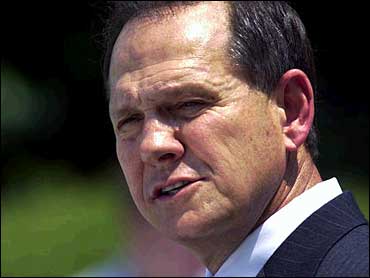 Roy Moore, the former Alabama Supreme Court chief justice who lost his job after erecting a monument of the Ten Commandments outside the state's courthouse, plans to announce in mid-April that he is setting up a presidential exploratory committee, an aide told CBS News.

The aide, Zachery Michael, said Moore's platform will be focused on repealing the health care overhaul law, replacing the progressive income tax with a flat tax and bringing "commonsense solutions" on immigration and border control.

Michael said Moore is entering the fray because "we're just seeing the same type of politicians run for president." He said Moore is someone "who can connect with over 300 million Americans across the country, which is something we've been lacking with today's leaders across society."

Michael said Moore should not be thought of simply as a culture warrior, arguing that he has been a strong advocate for limited government.

"He not only stood up for his faith, he stood up against the tyranny of government," he said.

Contacted by the Associated Press Monday, Moore stopped short of confirming that he would set up the exploratory committee, saying only that he is "considering" doing so and is being encouraged by supporters.

Moore traveled to the key early voting state of Iowa four times last summer, and he held rallies in support of the successful effort to remove three judges who voted to allow same sex marriage in the state. He plans to travel to other key early states, including Nevada, South Carolina and New Hampshire, following his announcement in April.

A West Point graduate and Vietnam veteran, Moore was removed as chief justice by Alabama's judicial ethics panel in 2003 for refusing to remove the Ten Commandments monument after a federal court order.  He is the author of "So Help Me God: The Ten Commandments, Judicial Tyranny, and the Battle for Religious Freedom."

Moore has twice lost GOP gubernatorial primaries in Alabama, in 2006 and 2010.