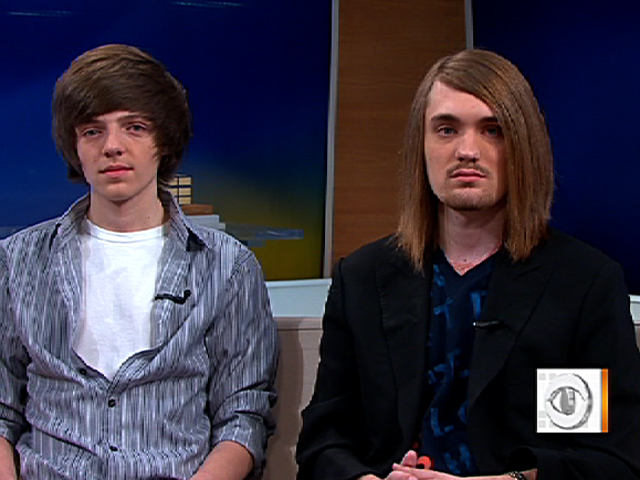 On Oct. 5, a thunderstorm rolled through St. George, Utah. Best friends Alex Lambson and Dane Zdunich, then 17 and 16 respectively, were waiting outside for a ride home from school. Suddenly, a bolt of lightning hit Dane in the head, passed through him and struck Alex, as well.

Snow Canyon High teacher Ron Hansen was first on the scene and found both boys unconscious. He started CPR on Alex.

Hansen said, "Alexander, his clothes are gone, whew! They're just gone, and they're smoldering around the edges."

Hansen recalled, "All I'm smelling is smoke, and I'm thinking his (Alex's) lungs are just burnt right out."

CBS News Correspondent Priya David-Clemens reported on "The Early Show" that school officials tried to revive them until paramedics arrived to take over.

Dr. Mike Tremea was in the emergency room that day. He recalls Dane had no pulse for 38 minutes.

Tremea said, "Direct strikes are usually fatal. ... So he stopped breathing and his heart stopped beating. He was clinically dead."

Miraculously, doctors managed to save both boys. Dane was released after one week, while Alex remained hospitalized for nearly two months.

More than 40 percent of Alex's body was burned. He had to re-learn how to walk.

Both boys are again immersed in schoolwork, and grateful to be able to thank their teacher Ron Hansen for refusing to give up when all appeared lost.

Leslie Broderick, Dane's mother, said, "Even if you think there's no hope, don't stop. Because my son's pretty much back to the way he was before the strike."

On "The Early Show," Alex Lambson, and Dane Zdunich, and their mothers, Kaleen Talley, Alex's mom and Leslie Broderick, Dane's mom, discussed how all their lives changed in a flash.

Alex, now 18, said he's still suffering from chronic nerve pain and has extensive scars on his neck from the strike.

As for 17-year-old Dane, he said he's lost a lot of weight since he was struck.

But looking back to the day of the strike, Dane recalled that they'd been talking in his statistics class about the possibility of the school being struck by lightning because the school's roof had been hit the day before.

"Last thing you expected for this to happen to you, of course," Hill said.

"Especially talking about it that day," Dane added.

When the lightning struck, both young men were knocked unconscious. Dane remembers his memories didn't return until days later in the hospital.

She said, "When he was looking at us, and asking us, at first, he still had a tube in his throat, his breathing tube. So he would ask us kind of with sign language, you know, what happened. Question in his eyes, and (we were) trying to explain to him so he could understand it. Yeah, we were concerned. You know, is he going to remember things prior to the strike? It was very scary after brain tests and MRIs."

Talley remembered the moment she saw Alex for the first time after the strike.

"It was unbelievable," she said. "Alex, he caught on fire. His body was on fire, so the smell, just the smell and seeing him and the sight is something, obviously, I will never forget. But just when they called and said, 'Your son's been struck by lightning.' I hung up the phone and kept saying, 'Lightning?' You know, it's a clear day we were just a few miles away. It was just really a surprise and very unreal."

Hill remarked, "Considering everything that happened, you guys are in great shape today. ... You have a little bit of a road ahead of you, though. I understand that you both have a pretty good sense of humor. You must really need that now. Do you joke about this?"

"Oh, we did, actually, in the hospital," Alex said. "And also, like I was still unconscious pretty much, and we were joking about it already."

"What did the doctors and the nurses say about that?" Hill asked.

"They thought they were pretty funny," Broderick said.

"I would say (laughter is) a healthy part of the recovery process," Hill said.

Alex remarked, "I guess I was pretty funny on morphine."

Now Alex and Dane are going to celebrate a second birthday on October 5.

Dane explained, "Well, we both died, and in a sense, we're reborn. So it's kind of an interesting experience, obviously. So we're going to kind of celebrate that as another birthday."

Hill said, "You didn't really, as a teenager, you know, you typically feel like nothing's going to happen to you. This has really had to change your outlook on life."

Alex said, "Well, it's kind of funny, because me and Dane we used to run across rocks and jump down pretty much like 20 foot cliffs and do a lot of stupid things and dirt bike, and light fireworks and stuff like that. But, the thing that finally kills us is just waiting for a ride outside school."

"But, it didn't really kill you because you're back with us and that's the most important thing," Hill said.

"We have the stubborn teenagers on our side," Talley said. "We were both strong, in a good state, very strong-willed, so they've overcome a lot to be here today. It's amazing."

"Do you still sort of hug them a little bit more?" Hill asked

Talley added, "Alex still requires 24-hour care. And so it's great. I get to spend 24 hours a day with him. And I know a lot of 17-year-olds wouldn't enjoy that. But we're enjoying having this time to spend with him."

Hill joked, "You're loving every minute of it, aren't you?"

For more on their story, go to the blog, "Alex and Dane- Beating the Odds."