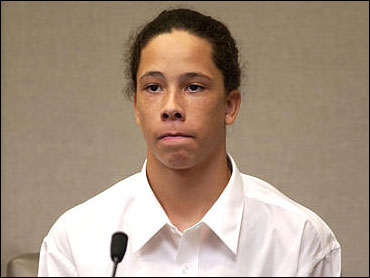 The only child shot during last year's sniper spree calmly told jurors Wednesday how he was gunned down outside his school. His aunt tearfully recalled that as she rushed him to a clinic, "he told me that he loved me."

Iran Brown, shot on Oct. 7, 2002, after his aunt dropped him off outside his middle school in Bowie, Md., said the shooting "brought me closer to God." Brown, now 14, testified for less than two minutes and was not cross-examined by lawyers for suspect John Allen Muhammad.

"I walked out (of the car) and I put my bookbag down and I got shot," Brown told the jury.

He then went back to his aunt's car, and she drove him to a nearby urgent care clinic, he said. He was hospitalized for several weeks with severe injuries to many of his major organs, including his spleen, stomach and pancreas.

The teen also testified that he is in the ninth grade and makes A's and B's.

His aunt Tanya Brown testified that she was dropping him off at school because he had been temporarily barred from the bus for eating candy. She said she heard a loud noise, and then heard Iran calling for her.

"He told me, 'I've been shot.' I didn't believe him at first," she said. Then she saw a hole in his shirt and a dark stain, apparently blood.

Brown, a nurse, said she made the decision to drive him to a nearby clinic almost instinctively. She wept on the stand while prosecutors played the tape in which she told a 911 dispatcher where she was going. Doctors subsequently credited her decision with helping save the boy's life.

"He was extremely pale" by the time they arrived at the clinic, she said. "He told me that he loved me."

Brown's family had initially been unwilling to allow the teen to testify. Richard G. Brydges, an attorney for the family, had filed a motion late Tuesday seeking to quash the prosecutors' subpoena.

On Wednesday morning, though, Brydges told Circuit Judge LeRoy F. Millette Jr. that the family, after consulting with prosecutors, was "comfortable with young Mr. Brown taking the stand." The motion was withdrawn.

The Brown shooting happened just a few hours after Montgomery County, Md., police had held a news conference to announce that police officers had been posted at schools for protection.

Montgomery County police Capt. Nancy Demme testified that the officer were placed at schools "not only as a deterrent but also to give the public peace of mind."

The school where Iran Brown was shot is in neighboring Prince George's County.

Seawell said she knew she had been shot immediately, but the people standing near her outside a craft store near Fredericksburg on Oct. 4, 2002, didn't believe her.

"I felt pain through my back, then my front, heard the noise almost simultaneously, and I knew immediately that I had been shot," she said. "I first prayed, first said a prayer that God would not let me die."

She told a bystander what had happened and "he didn't believe me. ... He said, 'Are you sure?"' Seawell testified. A caller to 911 at first said only that the victim "was definitely injured," only later acknowledging that she had apparently been shot.

Also on Tuesday, a D.C. police officer, Henry Gallagher, testified that he pulled Muhammad over Oct. 3 after he ran two stop signs just two hours before the fatal shooting of Pascal Charlot, 72, a retired carpenter.

Gallagher told the jury he watched a dark blue Chevrolet Caprice with tinted windows run through two stop signs, and "I felt he was trying to get away from me." But he said he let Muhammad off with a warning after verifying that his driver's license was valid.

In all, 10 people were slain in the spree that terrorized the area for three weeks last year, beginning Oct. 2. Muhammad, a 42-year-old Army veteran, is on trial only for the shooting death of Dean Harold Meyers outside a Manassas-area gas station on Oct. 9.

However, prosecutors must prove multiple murders to obtain a capital murder conviction on one of the two death penalty charges against Muhammad.