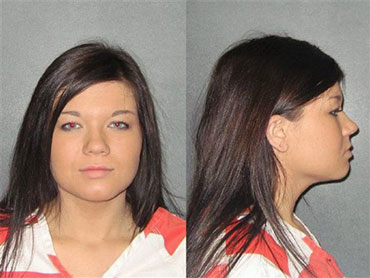 And one expert says the show itself could become a crucial piece of evidence as the case unfolds, since it has Amber Portwood repeatedly lashing out at ex-boyfriend Gary Shirley, slapping, choking, pushing and kicking him, among other things.

Portwood, 20, shocked viewers when she attacked Shirley on camera - in some instances, in front of their two-year-old daughter, Leah.

"The fact that she's caught on tape is critical," says CBS News legal analyst Lisa Bloom, "because now we have conclusive evidence of what happened."

Portwood is facing three felony counts and a misdemeanor, for domestic battery, violence, and neglect of her child.

The show has been tabloid cover fodder, and getting monster ratings.

Two million viewers may have watched the fights simply as the latest in a seemingly endless line of train wreck TV, observes CBS News Correspondent Bill Whitaker, but prosecutors in Anderson, in central Indiana, see them as a crime.

Portwood is free on bail after spending a night in jail.

Leah was placed in protective custody last month, and on Tuesday, a court ordered Portwood to stay away from Shirley.

"I have a lot of problems," Portwood admitted in an interview, "plus, I don't care about myself … and I don't know it at the time, until I watch it over and I'm like, 'Wow!"'

"Teen Mom" isn't alone, Whitaker points out, as extreme parenting shows including "Jon & Kate Plus 8" and "19 Kids in Counting" have been making headlines -- and money.

While MTV has no comment on Portwood's troubles, the cable channel's role may not be without consequences. "If they fanned the flames of a crime," Bloom remarked, "then they are responsible potentially as co-conspirators or accessories after the fact."

Schembs said she's "a person who is completely able to take responsibility for her actions and care for her daughter. Contrary to what a lot of people probably believe, Amber's a very nice person, a very responsible person and a very honest person."

He adds that he thinks Leah "is doing well. … My understanding, based on conversations yesterday, is that she should be back with her mom sometime today," and "all reports are that she's doing a nice job with her."

But Schembs conceded that, if convicted of an of the felonies, Portwood could lose custody of Leah.

Shirley, he said, has a "cooperative" relationship with Portwood and hasn't actively sought custody.

Smith remarked that, as he looked at the scenes from the show, he wasn't sure if "what I was seeing was real or if it was theater. … Is there a way to determine that?"

"Well, that's one of the things we'll explore," Schembs responded. " … That's a really unique approach to a defense of a case of this type and I think - any lawyer who defended it would look into things like that."

How does Schembs think this will all play out?

"That certainly is a good question," he replied, "unique in my experience."