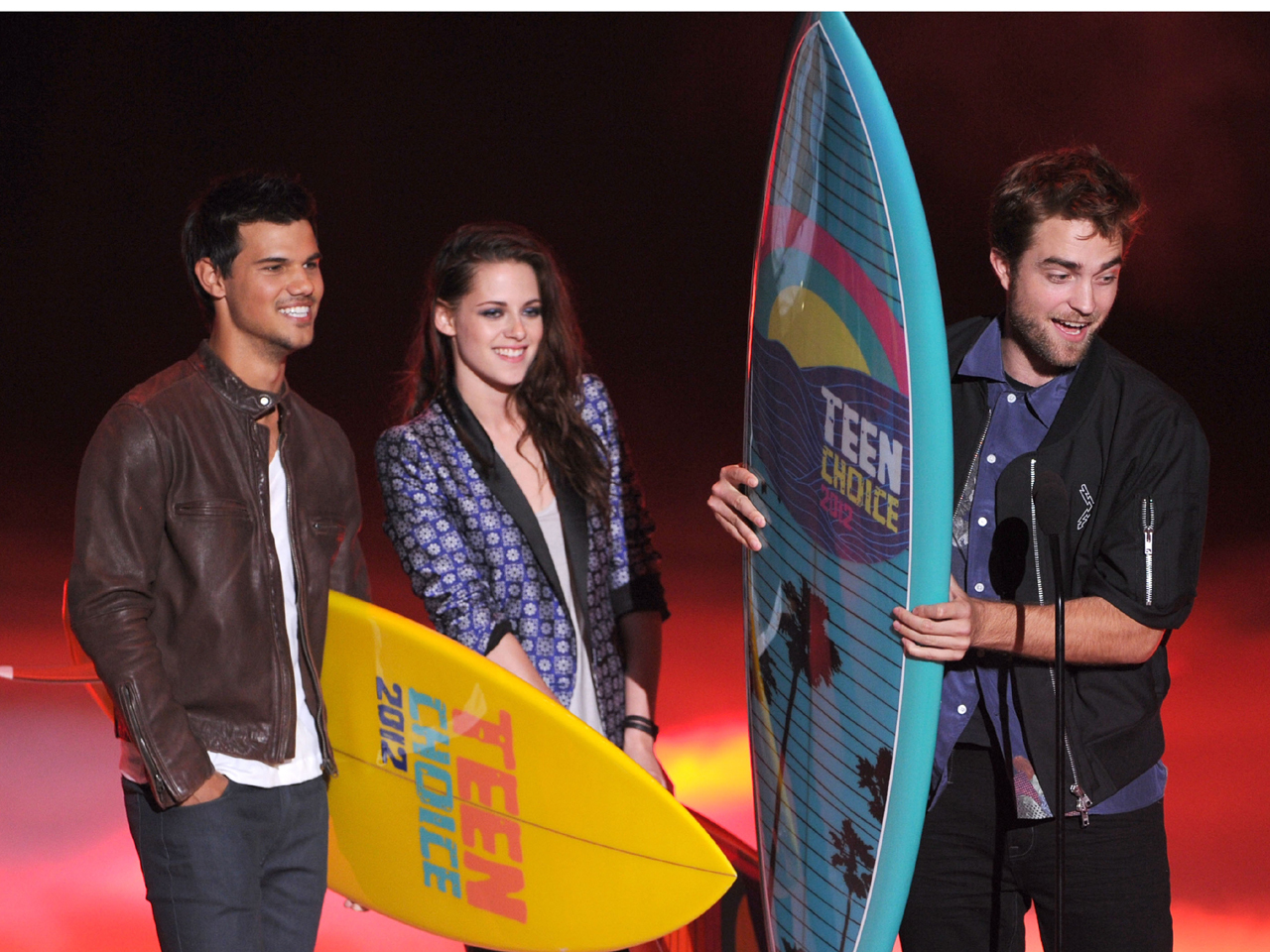 (CBS/AP) The stars of "The Twilight Saga" turned out to be big winners of the night Sunday, taking home ultimate choice, the Teen Choice Awards' lifetime achievement honor. The hit movie series has won a whopping 41 Teen Choice trophies since the first film arrived in 2008.

The Teen Choice Awards got under way with a star-studded red carpet followed by a slew of awards, which were handed out at the Gibson Amphitheater in Los Angeles.

The teen-fueled ceremony honors film, TV, music and sports stars in such categories as choice hottie, villain, liplock and hissy fit. A record 134 million votes were cast this year.

Going into the 14th annual ceremony, Kristen Stewart's "The Twilight Saga: Breaking Dawn - Part 1" and "Snow White and the Huntsman" both led the nominees with seven nods a piece.

Stewart, along with "Twilight" actors Taylor Lautner and Robert Pattinson, were all on hand Sunday to accept their surfboard-shaped trophies. Lautner told the crowd, "We owe everything to you guys," adding, "It's amazing you guys are still around and just as strong and just as loyal." Stewart also thanked the fans for their continued support of the vampire series. Pattinson did the same, and then gave his surfboard to the audience. His co-star and real-life gal pal, Stewart, followed suit.

Stewart also walked away with choice romance movie actress, as well as choice female actress of the summer for her role in "Snow White and the Huntsman."

Other multiple winners included "The Hunger Games," boy band One Direction, "The Vampire Diaries," Justin Bieber and Taylor Swift, who picked up her 20th trophy, the most ever won by a female artist.

"I just feel so honored that I get to have you guys in my life," Swift said.

The first award of the night, choice comedian, went to Ellen DeGeneres. After accepting her trophy, she honored pint-sized stars, Sophia Grace and Rosie, with the choice Web award.

Other winners included Zac Efron for choice actor in a drama and Josh Hutchinson for choice sci-fi/fantasy movie actor for "The Hunger Games." In the movie category, "21 Jump Street" scored choice comedy. Hill, who lost the supporting actor Oscar earlier this year to Christopher Plummer, used his acceptance speech to poke fun at the 82-year-old "Beginners" co-star. "I'd just like to point out that he's not nominated for anything tonight," joked Hill, who co-wrote and executive produced the movie.

When Selena Gomez picked up the choice music group award for her band, Selena Gomez & the Scene, the crowd sang her a warm "Happy Birthday." Gomez, who was sitting in the audience next to her beau Justin Bieber, turned 20 on Sunday, July 22.

This year's choice hottie awards went to Miley Cyrus and Ian Somerhalder. Cyrus wasn't there to accept the honor, but Somerhalder thanked fans on her behalf.

The event kicked off with an introduction by the ceremony's co-hosts: "The X Factor" judge Demi Lovato and "Glee" co-star Kevin McHale.

Lovato's "X-Factor" co-judges appeared in taped segments. Simon Cowell joked in his typical way, calling Lovato a brat and describing her as irritating and annoying.

Bieber served as one of the show's musical performers, along with Carly Rae Jepsen, Flo Rida and No Doubt. DJ Pauly D of "Jersey Shore" was on hand as the house DJ.

The Hollywood frolic comes two days after the midnight massacre at a Colorado movie theater showing "The Dark Knight Rises," killing 12 and injuring 58. Show organizers say that "The Dark Knight Rises" was not up for any Teen Choice awards this year nor was any reference to the tragedy during the show.

Tell us: What did you think about the 2012 Teen Choice Awards?