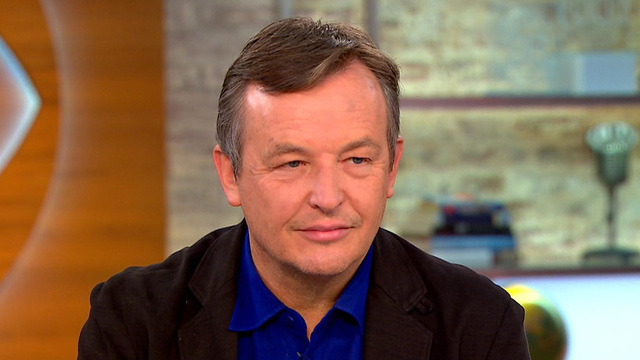 Some of the world's most influential individuals have shared their personal stories, ideas and knowledge in TED Talks, covering just about any topic you can imagine.

It may seem impossible to follow the likes of Bill Gates, Elizabeth Gilbert and Sir Ken Robinson -- among hundreds of others -- but TED curator Chris Anderson shows you how you can in his new book, "TED Talks: The Official TED Guide to Public Speaking."

"If you can sit around a table at a dinner party and just talk to people about what you've done, you can give a talk," Anderson told "CBS This Morning" Friday. "The best modern talk is conversational. You don't have to be a big orator, you just have to say something in an authentic way. The key is to have something worth saying -- that's the only thing that actually matters."

Since its launch in 1984, the TED conference and its spinoffs have become a global phenomenon. The talks are viewed about one billion times each year online, where they're available to watch for free, and they have been translated into more than 100 languages.

"I think it's just information that matters to people, condensed. It's compressed so that you hear it pretty quickly, you don't get bored, in a language that you can understand," Anderson said, explaining the TED talks' global appeal.

According to Anderson, delivering an impactful talk begins with the speaker's attitude.

"...I think the start point is for the speaker to go, 'You know what? This isn't about me. I got a few minutes with the audience, I'm going to speak in service of an idea that they need to know,'" Anderson said.

Each TED talk is limited to 18 minutes, which Anderson explained was the natural human attention span. To avoid overwhelming the listeners with information, Anderson said speakers must condense and focus their ideas.

"It's hard to persuade people to concentrate for more than that, but it's long enough to really unpack an idea and to say something that matters," Anderson said. "First of all, just think that everyone in your talk has to relate to that, so have a through-line that connects everything."

He also explained some tools to help build a successful talk.

Anderson said the opening is the most important. Avoid clichés -- like beginning by thanking the audience -- and lead with a statement that grabs the audience immediately, gives them a purpose to listen and makes a human connection.

"And then show where you're going -- why does this matter, why should you even care? If you can spark that curiosity, then you can start to build that idea and just use language that the people understand. You kind of have to use the pieces that are already in their mind to build your idea there."

He gave the example of British celebrity chef and activist Jamie Oliver, who began his talk about obesity and food with a shocking statistic: "Sadly, in the next 18 minutes when I do our chat, four Americans that are alive will be dead through the food that they eat."

With video and global distribution, Anderson asserted that there is "far more reason now" to master public speaking skills, and he predicted "presentation literacy" would become even more important than anything in written form.

"I really think kids in the future are more likely to get ahead not by writing a letter to the editor or by sending like a written resume, but by figuring out how to present themselves, record it on video, send that," Anderson said.