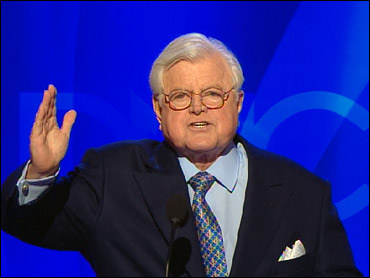 Sen. Edward Kennedy, who is fighting a malignant brain tumor, returned to work in the Senate on Monday for the first time since July.

Kennedy, D-Mass., was greeted by a rousing cheer from his staff on Capitol Hill as the Senate returned for a brief session to deal with the economic crisis.

"I feel fine," Kennedy said shortly before a luncheon meeting with about 100 staffers in the Senate's cavernous Russell Caucus Room. "I'm looking forward to the session and we've got a lot of work to do."

Aides strung a large blue-and-white banner reading "Welcome Back Senator" across the room, which is usually used for hearings.

Kennedy, 76, was accompanied by his wife, Vicki, and their two dogs, Splash and Sunny. Though he walked with a cane in his right hand, Kennedy's voice was strong and he appeared to be in good spirits.

The senator noted he and his wife were grateful for the many prayers and good wishes he had received.

Kennedy said he was looking forward to working on an economic stimulus package and was optimistic he can help forge a breakthrough on health care reform with President-elect Barack Obama in the White House.

"I'm looking forward, particularly, to working with Barack Obama on health care," said Kennedy, who has championed health care reform during his long Senate career. "We're hopeful this will be a prime item on the agenda. ... The president-elect has indicated that this was going to be a priority."

Kennedy had a seizure in May and underwent surgery in June for the brain tumor. After undergoing chemotherapy and radiation, he has increased his public activity. He spent time recovering at his Cape Cod home, and returned to Washington late last month.

In July, he made a surprise return to Capitol Hill to vote on a Medicare bill.

Kennedy is expected to be on hand Tuesday morning when Senate Democrats gather to choose their party leaders, a Kennedy spokesman said.

Sen. John Kerry, D-Mass., said he had spoken to Kennedy.

"I know Teddy's excited," Kerry said. "I've talked to him about it. He's pumped and ready to go. It's really a tribute to his determination and his courage and the fight he has displayed throughout this process."