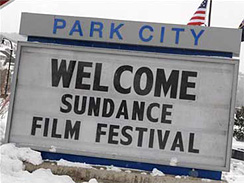 (AP Photo/Peter Kramer)
I just got back from another crazy, snow-filled weekend in Park City, Utah for the Sundance Film Festival. The festival continues through Sunday, but the first weekend typically draws in the initial big crowd to film premieres, swag houses and non-stop Hollywood parties.

I was there to host a live stream for the first ever Tweethouse. What is that exactly, you might ask? It was a lounge where fest attendees could hang out, grab a few gifts and enhance their Twitter knowledge with panels featuring notable celebs and personalities at the nexus of tech and entertainment. NBA star, Kareem Abdul-Jabbar, who also happens to have over 1 million Twitter follows stopped by with veteran actor Beau Bridges to chat about social media and their Sundance film, On the Shoulder of Giants.

Actor Joseph-Gordon Levitt, who starred in this year's flick, Hesher, also took advantage of the press to promote his own site, hitRECord.org. He appeared on the panel "Filmmaking in the Age of Twitter: How Affordable, Innovative Tools are Transforming Hollywood" alongside iPhone photographer Chase Jarvis, and Marcin Teodoru of 30dayfeaturefilmchallenge.com who crowdsourced an entire feature film.

Another celeb jumping onto the Twitter bandwagon was Entourage's Adrian Grenier. While promoting his documentary Teenage Paparazzo, he stopped by to post his first tweet ever: "On the tweet stage with some really cool nerds. #tweethouse"

Watch video from the panel that I moderated below:

The growing convergence between the tech and entertainment communities was even more apparent with this year's most random celebrity appearance going to none other than Bill Gates. If the buzz from him joining Twitter last week wasn't enough, after seeing the documentary "Waiting for Superman", Gates continued to take the spotlight dancing it up at Microsoft's Bing after party. Maybe he's looking to take Steve Wozniak's place on Dancing with the Stars? Ok, bad joke.

Besides the typical celebrity coverage of the fest, film enthusiasts were given more opportunities this year than ever before to engage and be part of the fest.

Sundance launched their official app on iTunes for $4.99, which includes a film guide and a GPS-like navigation to guide you to the closest box office and theater locations. Ustream.TV not only featured my videos from the Tweethouse, but an official live stream from Sundance including panels and celeb interviews. Thanks to a first-ever pay-per-view partnership with YouTube, you can also rent a selection of films from 2009 and 2010 for around $3.99 a pop to be viewed during a 48-hour period.

The interesting thing is that while technology is broadening and intellectualizing the entertainment landscape, it is also bringing a creative energy that echoes Robert Redford's initial goal with Sundance, which he reminded attendees of opening night.

"Are we sliding back? ... Are we afraid of the taking the chances we once took to get going? ... I felt that we were sliding. I felt we were getting to flat line, and we needed a fresh, new approach," he said. "When we first started there was a great separation between independent and the mainstream. ... I felt the best thing we could do to be fresh and new is to get more closely back to our roots the way we were."

Just like the independent film world, tech entrepreneurs launching startups talk of the sacrifice, the guerilla nature of starting a project from scratch and out of pocket – crashing couches, calling in every favor – all for that one idea. It's that unexplainable thirst and passion to culminate one's burning vision into something concrete that ultimately innovates, inspires, moves people and possibly disrupts the system.