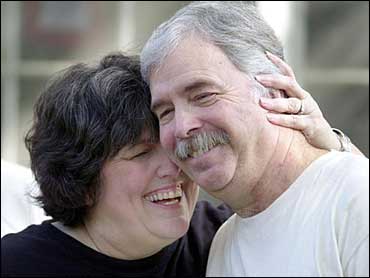 "He just said, 'What y'all doing?' Just like he was up the street," said an astonished Kay Young.

She was describing Sunday's telephone conversation with her son, Chief Warrant Officer Ronald Young Jr., one of seven prisoners of war, just hours after he was freed by U.S. forces in Iraq.

"He heard all the people here," Mrs. Young told The Early Show, "and he said, 'Sounds like y'all are having a party.' And I said, 'We are. It's for you. Why aren't you here?' And he said, 'Yeah.' So, he just, you know, he was in good humor. He laughed. And he just kept saying how much he wanted to see us. How much he missed us. Loved everybody. I asked him, at one point I asked him, did he feel everybody's prayers? He said, 'I've been doing a lot of praying myself.'"

Although Young did not go over the details of his capture, he did say he had lost 20 pounds, his mother said. Young was captured with Chief Warrant Officer David Williams after their Apache helicopter was shot down in Iraq.

The seven former POWs who were found Sunday are in Kuwait, where a military spokesman said they were happy and being cared for.

In the U.S., grateful relatives cried hugged, and laughed on Palm Sunday as they heard the great news of the rescue.

David Williams Sr. did not get to speak with his son, but his daughter-in-law did. "He called her approximately 4 p.m. yesterday afternoon," Williams Sr. said. "He sounded real good and anxious to get home. Asked about the kids. And then asked about his family."

Athol Riley says his son, Sgt. James Riley from the 507 Maintenance Division, said he was tired when he spoke with him on Sunday.

But his son's immediate concern was money. "They'd taken his driver's license, his Mac card, and his checkbook," the elder Riley said. "So we get his bank statement and he said, 'Make sure there's nothing drawn out in Baghdad.'"

His mother Jane Riley added, "His mind was running a hundred miles a minute kind of thing. I would imagine that, just by the sound of what I've read and heard, they whisked them away pretty quick. So I would think that getting used to being back with people who speak English, and the whole thing would be tiring, confusing and a little unnerving in a way. Plus, heaven only knows what they actually went through. So, considering all those things, I think he sounded pretty damn good."

The Rileys woke up to the news on the radio that the seven POWs had been freed but did not know for sure if their son was among them.

"We went to church," said Jane Riley. "When we came back from church, the press was on our street, and then Maj. Banks, who's the officer, arrived at 9:30 and gave us the thumbs up that he was one of them. And then we waited till, you know, later."

Theresa Rowland rejoiced and then waited as well for word from her best friend, Shoshana Johnson. Rowland said that everyone at the Johnson's house was hugging everybody else.

"Hugged Mr. and Mrs. Johnson," she said. "Went and grabbed Erica and Nikki grabbed Janelle, of course, Shona's little girl. And we waited a little while, then the call came and I called my mom right away. I said, 'It's true, it's true, it's true. It's her. She's coming home.'"

Rowland says she always believed this would be the outcome. She had kept a journal for her friend and now she plans to hand it to her. "First, I got to hug her. I got to hug her first. But I have to stand in line behind the Johnsons. I think Mrs. Johnson said I could be, like, sixth in line," Rowland said.

Joel Hernandez says he has not been able to speak with his brother, 21-year-old Army Spec. Edgar Hernandez, but he said he and his family are really happy.

"We had seen it on TV, we heard it on TV that they had rescued seven missing soldiers," he said. "But we didn't know for sure that my brother was in them until later on. A representative from the Army came to our house and confirmed to us that my brother was one of the ones that were rescued. And they were all the POWs that they were looking for. And that's why we were relieved, and we're real happy to hear that our brother was already found," he said.

The families do not know when they will get to see their loved ones. Jane Riley said, "they [the military] said 24 to 72 hours yesterday, that they would be at Qatar, and then they hoped to bring them straight back to Walter Reed in Washington.'

"But with the Army," she added, "you never know. Things change."