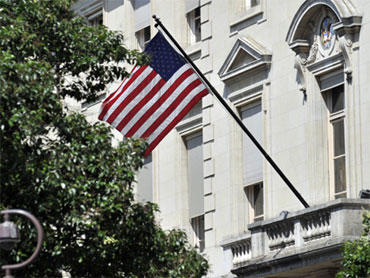 Two men who work for the U.S. Embassy in Paris underwent medical tests after handling a suspicious letter Friday, the embassy said, and Paris police said it appeared they had been exposed to tear gas fumes.

Both men were cleared and released after being examined at the Paris hospital Hotel Dieu, Embassy spokesman Paul Patin said. The mailroom employees identified a suspicious letter and the embassy alerted French authorities, he told The Associated Press.

The central laboratory of the Paris police identified the irritant as tear gas, according to a police official who was not authorized to speak to the media. However, Patin said he could not immediately confirm that report.

An embassy employee received a manila envelope sent as registered mail that had no mail inside, but it began emitting fumes after the employee opened it, the official said.

The official said the throats and eyes of the employee and two others were irritated. There was no immediate explanation for the discrepancy in the number of exployees reported affected.

The embassy spokesman said that only two people were involved and "they were cleared and released."

Two months ago, Paris police were asked to investigate a similar case involving a letter to the U.S. ambassador, the Paris police official said.

The embassy did not provide further information about where the letter came from or the nationalities of the employees. The mailroom is in the main building of the U.S. embassy, located just off the Champs-Elysees not far from the French presidential palace.

The embassy, which is always surrounded by layers of security, remained open after the incident.

The FBI concluded that an army scientist, Bruce Ivins, was responsible for those attacks. Ivins, who killed himself in 2008, denied involvement in the anthrax letters and his family and some friends have continued to insist that he was innocent.