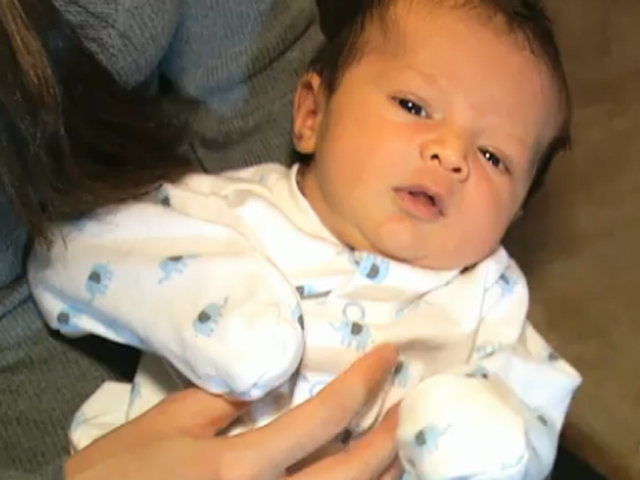 MOORE, Okla. -- A teacher whose spine and sternum were fractured in the Moore, Okla., tornado last May named her new baby after a student who was killed in the disaster.

Jennifer Doan was inside Plaza Towers Elementary School when the tornado struck. Speaking from her hospital bed as she recovered from her injuries, Doan told CBS News' Vinita Nair she remembered putting her arms around two of the children.

"We told them to get down," she said. "There weren't any lights on … and they were all scared. I held my arm -- my arm over the ones next to me … and I looked up at the door and I put my head down and it just -- hit."

Rescuers found her under the rubble, with one of the third-grade students she tried to protect buried beside her.

Asked what she and her student were saying to each other, Doan said, "It was just telling him to keep calm and that they would come, and he just kept telling me that he couldn’t breathe and he didn’t want to die."

Doan never lost consciousness but was transported without knowing what happened to her students or fellow teachers. She later learned that seven of her 20 students died.

Doan was eight weeks pregnant when the tornado struck. She was certain she'd lost the baby, but doctors found a heartbeat.

"I was so relieved in that moment, because for hours before that, I thought I had lost him, too," she told KWTV.

Doan and her husband decided on Jack for a first name but wanted a special middle name. She picked the name Nicolas, after Nicolas McCabe.

"He had a humongous smile," she said of the student who was killed in the tornado.

His death has been very hard on her.

"He was the closest one to me that I actually had my hand on who didn't make it," she said.

But little Jack's name is even more special than Doan first thought. A friend pointed out that the baby's name actually is a tribute to all the children who lost their lives: "J"  for Janae Hornsby; Sydney Angle makes the "A"; "C" comes from Antonia Candelaria, Emily Conatzer and Christopher Legg; "K" is for Kyle Davis.

Back to school for kids in tornado-ravaged Moore, Okla.

6/20: Dow drops amid concerns over China; three-year-old hears for the first time
More