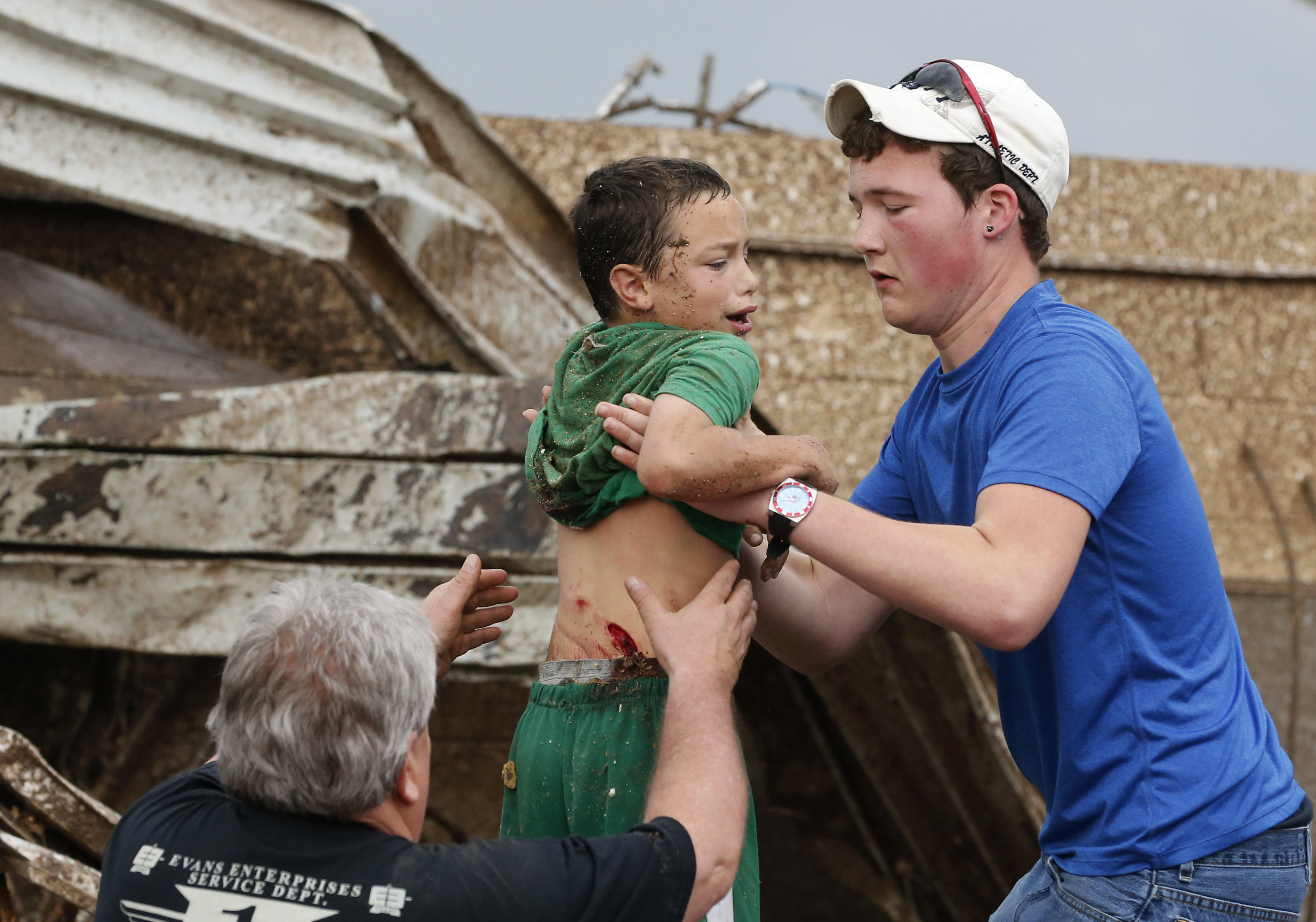 MOORE, Okla. -- When the storm came, it wasn't a surprise. Tornadoes have a habit of ripping through town, and the forecasters had been warning for days that another was going to descend from dark clouds sure to gather in the late afternoon.

The only question was: What horror would this tornado wreak this time? A year later, the answers still scar the Oklahoma City bedroom community of Moore.

In all, 24 people died in the May 20, 2013, storm, among them seven children killed inside a school that didn't have a shelter. Hundreds were injured. Thousands of homes and other buildings were removed from the map.

The recovery from the tornado, twisting with 210 mph winds as it took 39 minutes to carve its 17-mile-long path of destruction, remains halting.

Neighborhood streets end in dirt roads with piles of rubble and tree roots. There are new homes that have taken the place of those lost, and broken houses that still bear the spray paint markings left after emergency responders searched for any dead inside.

A year later, The Associated Press spent a day in Moore, returning to some of the people and places photographed in the days after the storm. Here are some of the stories about their journey to recover from the monster that took their homes and stole so many lives.

Abby Cotten was going to knock off early, but her boss in hospital admissions knew better. When he saw what was in the forecast, and watched the tornado develop on television and plow through Moore, he wouldn't let her leave. Not until it was safe did he drive the 28-year-old home, to the house where she grew up and still shared with her parents.

"I didn't even recognize my street at the time," Cotten said. "I was counting driveways to try and find my house."

Cotten's parents had owned the home for 37 years. They learned it was gone while on vacation, in an email Cotten sent from her phone to their hotel in Mexico. They never really came home - Cotten's mom didn't want to stay in the neighborhood - and her parents decided to rebuild a few miles away. But Cotten herself is staying put. Habitat for Humanity will build a new home for her on the empty lot later this summer.

"Even this morning the weather was bad and I was getting ready to go to work and I was thinking, 'Should I bring things with me or not? What if the day turns out like it did that day?'" she said.

Linda Harville had seen her share of tornadoes. She'd lived in Moore for 32 years, and Moore is the kind of place where a storm's severity is measured not by wind speed but in lives lost.

"There had been four huge tornadoes that had come through Moore since '98, and (they) all took kind of the same path," the 62-year-old said. "It came right down through the same downtown area of Moore. It was just that it would veer a little bit north or south."

Until last year when, she said, "it finally hit my house." Just about everything was destroyed, and what was left is still in storage. She hasn't yet found the time or emotional strength to sort through it.

"I tried going through it that next week, but then the other tornado came through, and then it got so hot," Harville said. "Probably half of it will have to be thrown away. I don't know really what I have and don't have."

She lives in Edmond now, 30 minutes to the north. It's still located in tornado alley, but at least it isn't Moore.

"Why would you want to move back to a little town where you know in four or five years there's gonna be another EF-5 tornado to wipe it out?" she said. "There's a target there on Moore. It's kind of obvious after all these years."

Not for a moment did Kevin Kressler consider leaving Moore. And so the 44-year-old met with a few builders not long after the storm hit, chose a floor plan - complete with the storm shelter his old place lacked - and got started on construction as soon as possible. He moved in right before Christmas, one of the first to return to his neighborhood, the same one where seven children died at Plaza Towers Elementary School.

"There's a lot of work going on out here. It seems like I go to work in the morning and I come back and there's always something new going on, a new house going up, frame going up," he said. "I'm just kind of glad people are rebuilding."

Kressler is a rare find in this community: He's at peace in Moore. He even jokes about how the storm has helped with his yard work.

"I didn't have a lot of trees in the yard, and was kind of glad the tornado got rid of the bushes in the backyard because now I don't have to mow around them," he said.

Jennifer Doan was inside Plaza Towers Elementary School when the tornado struck. Speaking from her hospital bed as she recovered from her injuries, Doan told CBS News' Vinita Nair she remembered putting her arms around two of the children.

Rescuers found her under the rubble, with one of the third-grade students she tried to protect buried beside her.

Doan never lost consciousness but was transported without knowing what happened to her students or fellow teachers. She later learned that seven of her 20 students died.

Doan was eight weeks pregnant when the tornado struck. She was certain she'd lost the baby, but doctors found a heartbeat.

"I was so relieved in that moment, because for hours before that, I thought I had lost him, too," she told KWTV.

In January, Doan and her husband decided on Jack for a first name but wanted a special middle name. She picked the name Nicolas, after Nicolas McCabe.

"He had a humongous smile," she said of the student who was killed in the tornado.

Lynne Holman moved to Moore from Rhode Island a month before the storm hit. She'd seen blizzards and nor'easters on the East Coast, and thought the TV forecasters in New England made too much of them. So she didn't think much of all the warnings in Moore.

"It was the worst day of my life ... not knowing what to do, not taking it seriously enough," she said. "I grabbed my purse and I had shoes on and within seconds of laying down I could feel the wind on my feet, and I just screamed."

She raced to wedge herself between the washer and dryer before crawling down the hallway and into the bathroom as the tornado arrived.

"I was on the phone with my sister in Tennessee, so she was hearing the house come apart," Holman said. "After it was over she waited and said, 'Are you dead?' And I said, 'No, is it over?'"

The house had collapsed around her and boyfriend Paul Kemp and their cat, Cupcake. The first voice they heard came from the street, yelling "call out, call out!" Whoever it was - she still doesn't know - pulled them from the rubble.

The couple has since rebuilt and improved on their old house, but said they're not looking forward to their new backyard view, which will now include the monument being built to honor the people who died in the storm.

There was a tornado shelter at the house where David Lee Estep lived with his parents, but they never made it there. Not after opening the door to take a look at what was coming, only to be blown back into the house by the storm's winds.

Glass windows shattered, walls collapsed, and Estep, mother Laura Lee and father Donald were buried under the ruble in different parts of the house his parents had called home for 40 years.

"I about freaked out and then I realized I wasn't hurt and if I had to lay somewhere for three days, I was in a good position as long as that icebox didn't come loose and fall down on me," David Lee Estep, 53, said.

Donald, 78, and Laura Lee, 82, were dug out of the rubble by neighbors. They spent a few days in the hospital recovering - Donald with cuts and bruises all over his body, and Laura cracked four ribs. They said they didn't think twice about rebuilding in the same place. Disaster or no, they said, Moore is still their home.

"There wasn't nothing left. It was a sight," Laura Lee Estep said. "We're lucky to be alive."

Back to school for kids in tornado-ravaged Moore, Okla.

6/20: Dow drops amid concerns over China; three-year-old hears for the first time
More