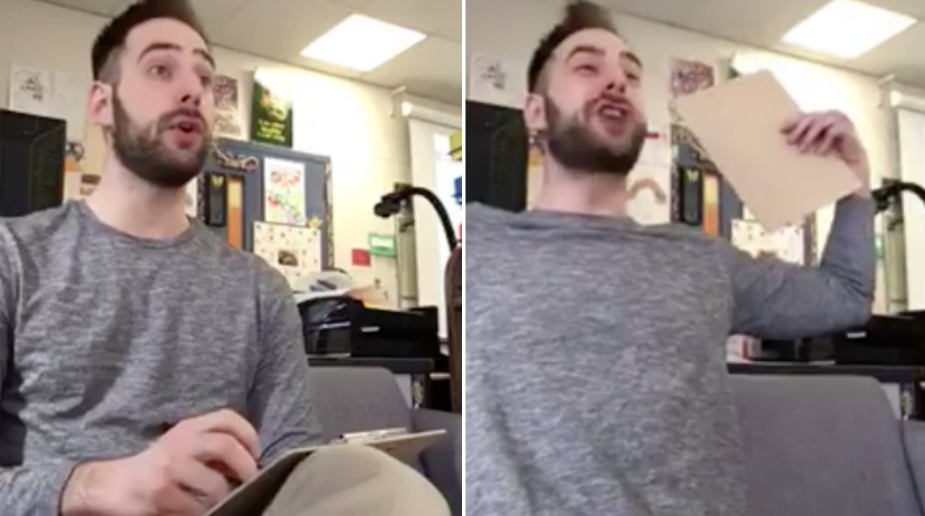 Fourth-grade teacher Joe Dombrowski pulled off his April Fools’ Day prank a few days early this year, and the internet can’t get enough of it.

Students at Royal Oak Elementary School in Michigan groaned as Dombrowski announced a pop “spelling test” Wednesday afternoon. He gave them a few minutes to fill out their answers. Silently, the kids got to work, most likely scratching their heads as they heard each word — because the words Dombrowski asked them to spell weren’t really words at all.

Every word was completely made up. And the majority had “silent letters.” But the kids didn’t know that.

As they finished, Dombrowski asked them to grade their own quizzes as he read the correct spellings out loud.

“All right, going through the list with the spelling, you’re checking your own lists, here we go,” said Dombrowski as he sat in front of the class.

He continued to read a list of words, giving false sentences to accompany them as the children protested.

Lucky for us, the hilarious prank was captured on video, which Drombrowski shared on his personal Facebook page with the caption, “Gave a fake spelling test to the kids today as an early April fools joke...”

The two-minute video has been viewed more than 9.7 million times and shared by more than 158,000 people.

“This makes me want to become a teacher so badly,” one Facebook user wrote.

“Haha, this is priceless,” another commented.

But Dombrowski’s class may have other opinions.

As the teacher wrapped up the quiz, he told the kids to check number 11.

“It’s April Fools, because this is an April Fools’ joke,” yelled Dombrowski, raising his arms up in victory.

“It’s not even April!” a student shouted back.

“Close enough,” he said. “April Fools. Congratulations, turn in your tests. This will be on your report card.”

This isn’t the first time a video of Dombrowski has captured the internet’s attention.

“I have a very active learning style,” Dombrowski said in the 2012 video. “I think that it shows through research that when you keep your students actively engaged in the lessons their learning will increase.”