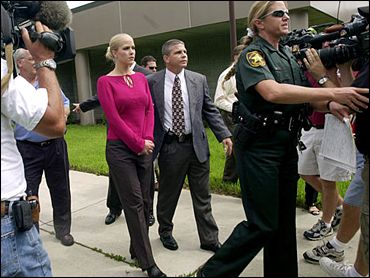 A newlywed middle school teacher has been charged with having sex numerous times with a 14-year-old student, including in a classroom, her apartment and once in a vehicle while his 15-year-old cousin drove.

Debra Beasley Lafave, 23, turned herself in to authorities in Ocala Monday. She was released on $25,000 bail.

Authorities say Lafave, who has been married less than a year, had sex with the student in the back of her sport utility vehicle while the student's 15-year-old cousin drove them around the Ocala area.

Lafave's lawyer, John Fitzgibbons, said he was not ready to respond to the allegations.

"There is a presumption of innocence in this country, and I hope people will give Debbie that presumption," he said.

Specifically, the 14-year-old was able to identify tattoos and birthmarks on Lafave's body and the layout of her apartment, particularly her bedroom.

The teen told investigators that he and Lafave got to know each other on their way back from a middle school graduating class trip to SeaWorld Orlando last month.

He said that she would invite him to her class during detention and ended up taking him to his basketball practices at a recreation center, to get his hair cut and to his house, the report said.

Lafave gave the boy her cell phone number on the last day of school, the boy told detectives. The sexual relationship allegedly began on June 3.

Lafave, who has worked with the Hillsborough County school system for two years, has been placed on administrative duty and could be suspended without pay following the next school board meeting, officials said.

The boy told detectives that Lafave told him that her marriage was in trouble and that she was aroused by the fact that having sex with him was not allowed.