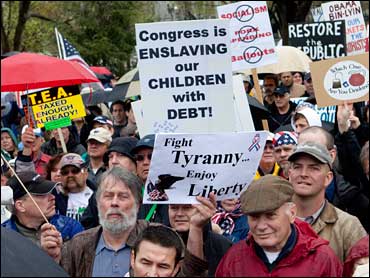 Kellen Giuda hopes you don't just pay your taxes today. He wants you to protest them, too.

Giuda is running one of the hundreds of demonstrations planned across the country this Tax Day against what the protesters believe are higher-than-necessary taxes and excess government spending, largely on the part of the Obama administration.

The demonstrations mark the culmination of a movement spurred in part by a February rant from CNBC personality Rick Santelli that generated more than a million views on YouTube - and even a White House response.

As you might recall, Santelli - surrounded by traders in Chicago - complained that Americans were being forced by the Obama administration to "subsidize the losers' mortgages" and called for a "Chicago tea party" to show his and others' anger.

Of course, the tea party that seems to have inspired the comment - the Boston Tea Party, that iconic 1773 protest in which Massachusetts colonists dumped tea into Boston Harbor - was tied largely to taxation without representation by the British government. That's no longer an issue for most Americans. (Though there are notable exceptions.)

But the rant - and the tea party rhetoric - struck a chord with Americans like Giuda, who organized Wednesday's New York City protest. The evening event features Newt Gingrich among its speakers. (Check back to CBSNews.com Thursday for a report from the protest.)

"Santelli hit a lot of things that I believe - that the government needs to stop getting involved in everything," Giuda said. "They're too much involved in my life, my money. Everybody's working hard - it's not up to the government to decide how our money should be allocated - it should be up to us."

Supporters have also repurposed the word "TEA" and turned it into an acronym for "Taxed Enough Already."

The tea party protest has been met with derision from many on the left, in part because of some unfortunate terminology - the protesters have become known as "teabaggers" thanks to their practice of sending tea bags to elected representatives - and in part because the movement is perhaps less organic than organizers might want the public to think.

From The EconWatch Blog: An Update On Tea Party Protests Around The Country

Though there do seem to be genuine anti-tax, anti-spending Americans who have gotten involved in the protests out of their frustration with the government, some have complained that their movement has been co-opted by Republicans more concerned with scoring points against the party in power than establishing fiscal discipline.

Supporters of former GOP presidential candidate Ron Paul reportedly initially pushed the tea party idea in protest of spending during the Bush administration. Now that a Democrat is in the White House, mainstream Republicans have taken up the cause: As outlined by Think Progress, a number of Congressional Republicans are speaking at tea party protests, and Louisiana Sen. David Vitter sponsored a bill to honor them.

The GOP has also looked to capitalize on the phenomenon -- with a Web site that allows people to send a virtual postcard, complete with tea bag of their choice, to the president, vice president and Democratic leaders of the House and Senate. That's probably better than sending actual tea bags to elected representatives: Huffington Post reports that the practice has "raised security concerns, and sometimes forced the evacuation of congressional offices in anthrax-like scares."

"It turns out that the tea parties don't represent a spontaneous outpouring of public sentiment," liberal columnist Paul Krugman wrote in the New York Times this week. "They're AstroTurf (fake grass roots) events, manufactured by the usual suspects. In particular, a key role is being played by FreedomWorks, an organization run by Richard Armey, the former House majority leader, and supported by the usual group of right-wing billionaires. And the parties are, of course, being promoted heavily by Fox News."

It will difficult to know to what degree that is true until the dust settles Wednesday. But no matter what happens, the president will likely still have most Americans on his side: In the latest CBS News/New York Times poll 56 percent of those surveyed said the support President Obama's handling of the economy. And 74 percent support higher taxes on the rich, the only group that Mr. Obama has proposed be taxed at a higher rate.

Still, Brendan Steinhauser, the director of campaigns for FreedomWorks, says the movement reflects genuine anger on the part of the sizable number of people, even if they are now in the minority. He is spending Wednesday in Atlanta with Armey, who is speaking at a tea party protest.

"This thing is very widespread - it's blanketed the country," said. Echoing Republicans like Sen. Jim DeMint of South Carolina, he described the protesters as a bipartisan bunch that represents "a hodgepodge of different groups [and] interests."

"The idea is to build a network," Steinhauser said, "and carry this momentum into the elections and hold both parties accountable."

More than 750 tea party protests are planned across the country overall Wednesday, and organizers estimate that the events in large cities like Atlanta and New York will attract several thousand people.