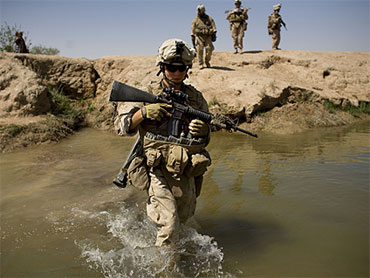 In the capital of Afghanistan's Helmand province, Taliban roam the streets freely. Barely a mile outside Lashkar Gah, they wield more control than the government, according to residents.

Last month 10,000 U.S., NATO and Afghan forces wrested control of Marjah, a Helmand farming community about 20 miles from Lashkar Gah, after years of Taliban rule. The Marjah offensive was the first test of NATO's new counterinsurgency strategy to turn ordinary Afghans away from the Taliban with good governance and development.

But the battle for Helmand is far from over. Even in Marjah, Taliban fighters still plant bombs under cover of darkness. NATO efforts to win over the population with public services and aid have barely begun.

On Wednesday, would-be suicide attackers targeted the offices of a charity in Lashkar Gah but were killed by security guards before they could detonate their explosives-laden vests. One foreign employee was wounded in the attack on the office of International Relief and Development.

According to residents, the Taliban presence in Helmand province remains formidable, even with the loss of their base in Marjah.

"Look over there at that TV tower," said Abdul Latif, an English teacher in Lashkar Gah who wore a scarf over his face because he didn't want to be identified in the company of foreigners. "After that tower, the rest is all Taliban. The Taliban are all over the city. They leave their guns at home and come into the city."

Helmand Gov. Gulab Mangal acknowledges that the Taliban have outright control of three of the province's 13 districts. In most other districts, the only areas where the government has control are the district capitals, according to residents and some government officials.

Mangal's appointee as chief of Baghran district, Abdul Razik, hasn't been able to take up the job because the Taliban won't let him enter the area. Instead, he works out of an office in Lashkar Gah, telephoning elders in Baghran to try to persuade them to switch sides.

"How can I go there by myself if they are in control?" Razik asked. "We don't have enough soldiers or police to go with me. I can't go alone."

In Musa Qala district, the government controls the main town but the Taliban hold weekly court sessions in the rest of the district to settle property and other disputes.

The new counterinsurgency strategy pushed by U.S. Gen. Stanley McChrystal requires NATO to not just take an area but to hold it. Yet the Taliban's strength in Helmand underscores how fragile NATO's hold is not only on Marjah - an 80-square mile district composed of farming villages - but also on other communities.

"As long as we have 10,000 folks on the ground and open the spigot of greenbacks the success will continue," he said. "The U.S.-NATO-Karzai team will also get a boost from the large part of the media ... who will take a transitory local success and extrapolate it into a nationwide, permanent turning of the tide. How many times did we see that in Vietnam and in Iraq? How many times did the Soviets trumpet the same kind of victory in Afghanistan?"

In an interview on the banks of the Helmand River, Mangal, the governor, likened Marjah to a pilot project in good governance. If it succeeds, the expectation is that it will turn ordinary Afghans against the Taliban, and win over Taliban fighters with a promise of development and good governance.

But people are skeptical, some pointing to the appointment of Abdul Zahir as Marjah's new district leader. Zahir was convicted and jailed in Germany on attempted manslaughter charges, according to German court documents. Zahir has denied ever spending time in a German jail. Afghan officials have not rushed to oust him, but are reviewing the case.

Former Helmand Gov. Sher Mohammed Akhundzada, who supported the assault on Marjah, warned that widespread corruption will turn the Marjah victory into defeat.

"The Taliban are not gone. They have only gone to the other districts of Grishk and Sangin," said Akhundzada, whose family has ruled the province for much of the past two decades.

"The administration of Helmand is generally corrupt and nothing is changing in Marjah, no signs of reform with the latest appointment," Akhundzada said. "It doesn't matter if you have thousands and thousands of NATO troops, you will still have Taliban in Helmand."

Scheuer said it was dangerous to suggest that Marjah was a big setback for the Taliban or a major win for the Afghan government and international forces.

"Is it crippling or even hurtful (to the Taliban) over the long term? No," Scheuer said, citing multiple attacks in Kabul on Feb. 28, a day after the provincial government hoisted its flag in Marjah's town center, that underscored the Taliban's ability to strike throughout the country.

"I think the U.S. and NATO can make inroads and win tactical victories with conventional forces in Kandahar or most any other place they want to go in Afghanistan with big forces, but so what?" Scheuer said. "We do not have a tenth of the forces necessary to be everywhere at once and apply a nationwide strategy - even if we had one."