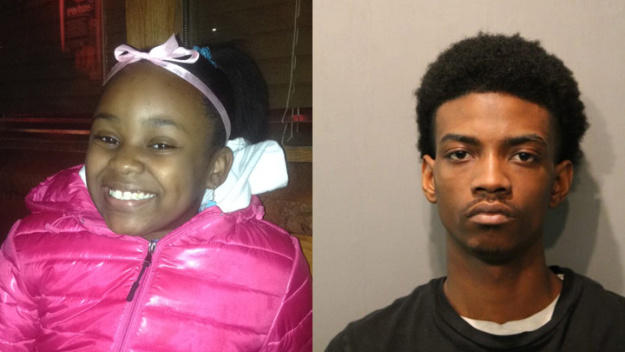 CHICAGO -- New video released by Illinois authorities shows a jailhouse attack on the suspect in the murder of an 11-year-old Chicago girl.

19-year-old Antwan Jones has been charged with first-degree murder in the killing of Takiya Holmes, who was shot in the head over the weekend. She died Tuesday.

Jones allegedly opened fire on three rival gang members in his neighborhood after a drug turf dispute, according to CBS Chicago, and a stray bullet struck the child, who was riding in a van with her mother nearby.

In the surveillance video released by the Cook County Sheriff’s Department, Jones appears to be sleeping while he’s handcuffed to a chair in a holding room before appearing in bond court on Wednesday.

Moments later, the 7-second clip of surveillance video shows an inmate run up and repeatedly punch Jones. The inmate was being detained on his own murder charge, the station reports.

The inmate was issued a disciplinary ticket, the station reports.

The girl’s killing has drawn outrage across the city.

“When it’s a child, that hits a nerve,” Andrew Holmes, the girl’s cousin and a community activist, told CBS Chicago.