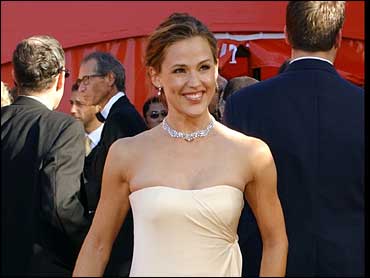 The CIA has asked Jennifer Garner, the star of the television show, "Alias," to help recruit new CIA agents. They want her to appear in a recruitment video that they'll show at job fairs and college campuses.

On "Alias," she plays secret agent Sydney Bristow, a beauty who helps goodness triumph over evil each week by using her knowledge of martial arts and her ability to speak every language in the world. The fact that the CIA has asked her to help them out makes me want to tell the CIA what we sometimes have to tell little children about television and movies: These are actors! It's just pretend!

Why should Garner necessarily be an appropriate person to recruit real spies just because she plays a spy on TV? Is Noah Wylie of "ER" going to make a plea for people to go into medicine? Is Dennis Franz of "NYPD Blue" going to recruit police? Is Ray Romano going to try to get more and more people to live across the street from their parents? Shouldn't the "intelligence community" know that these are just roles that actors play?

(Memo TO CIA: There really isn't a man named Mr. Whipple who gets upset with people who squeeze toilet paper rolls in supermarkets).

Agent Brandon is not only the entertainment liaison, but he served as a "technical adviser" for the first season of "Alias." Why is the Central Intelligence Agency involved in the programming of fictional television shows? Next season, are they going to promote a show called "Who Wants To Marry A Spy?"

Agent Brandon says that the show is very popular at CIA headquarters in Langley, Va. This seems a little odd to me. "Alias" is a fun, entertaining show, but does it really represent what the CIA is like or what the CIA would like to be like? On it, there are divisions within the Agency trying to bring the CIA down, and the CIA agents spend more time sabotaging each other than trying to defeat the enemies of our country. Why would the CIA want us to think it's like that any more than we already do?

Garner's character has a roommate who is secretly an enemy clone, her mother is a traitor, and she uses her sexiness, her expertise at high kicking, and her immense collection of colorful wigs to defeat the bad guys. And yet, Agent Brandon says that "Jennifer and the character of Sydney Bristow both reflect a lot of the qualities we look for in new career field officers." What qualities? Being double-jointed and owning lots of pretty outfits?

The part of the statement that seems the strangest is Agent Brandon saying that "Jennifer and her character" both display positive qualities. How does the CIA know what Garner is really like? Do they actually know everything about all of us as the paranoid conspiracy theorists would have us believe? Or have they just become enamored with a television star and show, and forgotten what is real and what is not?

If this is the case, I feel that once again it is my duty to remind the CIA that the show is "just pretend." We all have to be able to distinguish between screen characters and real people. If not, what's going to happen next? Are people going to think that just because someone plays an incredibly strong force that could destroy anything in his path in the movies, that he should be taken seriously, and, oh, I don't know, be elected governor of California?