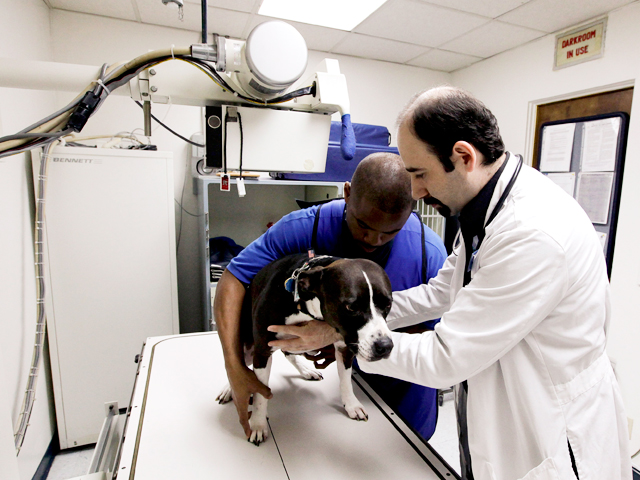 Broken bones for dogs and cats may not be life threatening, but a trip to the vet can guard against more serious injury.

Even for the most mild-mannered of pets, a car crash, fight or fall can be traumatizing and require extra care in handling, said Dr. Ann Hohenhaus, a New York City vet who wrote guidelines on dealing with broken bones in animals for the pet section of the health site WebMD.

"The dog's doing what he should do. He hurts. It's painful and you're fussing with him and he's going to bite you," she said.

"Muzzles are important even if your dog is a lamb and usually licks you to death," he said.

If you don't have one already, a necktie will work because it's soft and long.

Hohenhaus doesn't have a good substitute for a cat muzzle, but putting a thick or folded blanket over a cat with a broken bone will serve as a buffer between you and the cat's claws and teeth.

The most commonly broken pet bones are the femur, pelvis, skull, jaw and spine.

There are two kinds of bone fractures -- open and closed.

You might not even notice a simple closed break right away because it doesn't break skin. A cat might hide under a bed or sofa. A dog will probably limp, lick the wound, have trouble sleeping or sleep all the time, Hohenhaus said.

Richard Vogel, a photo editor for The Associated Press in Los Angeles, was playing with his dog at a park when Marley chased a squirrel up a tree. She started limping soon after. Two days later, the limp continued. An X-ray revealed a broken toe and Marley required a cast.

Dr. Kelly Miller, who treated Marley, said most open fractures happen when a dog is hit by a car or attacked by a bigger dog. Most closed fractures are caused by falls.

A large percentage of the broken bones treated where Miller works, VCA McClave Animal Hospital, belong to dogs that weigh under 10 pounds.

"They have long, thin bones and break their legs jumping off things like beds or the back of couches," she said.

The tiniest of dogs, weighing 3 to 5 pounds, have very small bone structure and it doesn't take a very high fall to hurt them.

"I've had two cases where they broke both front legs when they landed. It can be very traumatic," Miller said.

She recommends teaching small dogs to use doggie stairs or a ramp so they don't leap off furniture.

In open, or compound fractures, bone goes through skin and you have the added worry of infection from dirt and bacteria. "Antibiotics in under four hours is the golden period," Hohenhaus said.

Few animals die of broken bones, Hohenhaus said, "But a broken bone may not be the most serious problem your pet has." It could have a punctured lung, a ruptured spleen or even go into shock.

If you are transporting yourself, Hohenhaus has some tips.

Fashion a stretcher to stabilize the animal, using a baby's bathtub for medium pets or sheets for larger ones, for example.

Splinting can relieve pain and prevent shock but it can also cause more harm than good. Look at how bad the animal is hurt, where the break is, how long before you can get to a vet, if you have the materials and if the pet will allow it.

Splints can be improvised using rolled newspapers or paper towel rolls, or even thick cardboard and tape. Don't wrap too tightly. If you do splint, do it in the position you find the animal. Never try to straighten a crooked leg.

If your animal is small enough to carry, do not pull on its legs to lift it, make sure the injured side is facing away from you, and carry it close to your chest in case it squirms.

A pet ambulance trip costs $255 and goes up depending on extras like oxygen, bandages and distance, Montes said. He said at least two pet insurance companies cover the service.

The technicians take vital signs, make sure animals are comfortable, try to control bleeding and communicate with the clinics so vets know what to expect. They do not administer IVs or insert catheters, Montes said. And it is illegal for them to use lights or sirens.