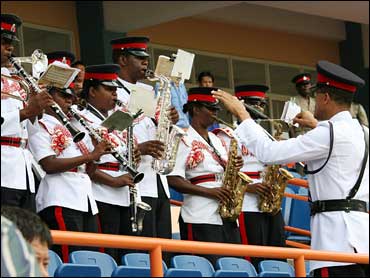 A diplomatic gaffe marred Saturday's inauguration of a China-financed stadium on this Caribbean island when a band performed the national anthem of Chinese rival Taiwan.

Chinese Ambassador Qian Hongshan and scores of blue-uniformed Chinese laborers who built the $40 million Queen's Park stadium as a gift were visibly uncomfortable as Taiwan's anthem echoed inside the 20,000-seat venue.

Describing it as a blunder, Grenada Prime Minister Keith Mitchell pledged an investigation into how the Royal Grenada Police Band could have prepared the anthem of Taiwan instead of China.

China and Taiwan split in 1949 amid a civil war, and Beijing claims the democratically run island is a renegade province that should not have diplomatic ties with other countries.

The Asian rivals have both campaigned aggressively to win the allegiance of Caribbean nations. Grenada switched diplomatic allegiance from Taiwan to China in 2005.

"I am very saddened," Mitchell told the workers and Chinese Embassy staff from Grenada and neighboring Trinidad and Tobago. "This unfortunate error breaks my heart."

Police declined to comment except to say they would issue a statement later.

A similar mishap occured at the White House in April 2006 during a visit by Chinese President Hu Jintao when an announcer called China by Taiwan's formal name.

Grenada's stadium was destroyed by Hurricane Ivan in 2004, and some 500 Chinese workers helped rebuild the venue in time to host cricket World Cup matches in April.

With all gate receipts going to host governments, Grenada stands to collect substantial revenue from the first World Cup in the Caribbean as it moves to revive a tourism industry devastated by hurricanes in 2004 and 2005.