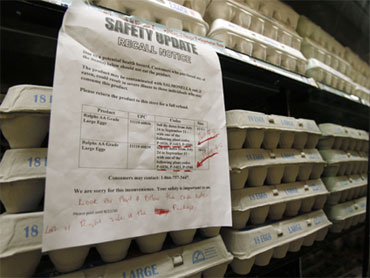 A half-billion eggs have been recalled in the nationwide investigation of a salmonella outbreak that Friday expanded to include a second Iowa farm. More than 1,000 people have already been sickened and the toll of illnesses is expected to increase.

Iowa's Hillandale Farms said Friday it was recalling more than 170 million eggs after laboratory tests confirmed salmonella. The company did not say if its action was connected to the recall by Wright County Egg, another Iowa farm that recalled 380 million eggs earlier this week. The latest recall puts the total number of potentially tainted eggs at over half a billion.

CBS News Correspondent Bill Whitaker reports Wright County Egg, a huge seven million chicken facility is owned by Jack DeCoster, no stranger to controversy. This year, DeCoster was ordered to pay more than $100,000 for ten counts of animal cruelty caught by hidden cameras. In 2000, he was fined $150,000 and dubbed a habitual violator of Iowa's environmental laws. We have been tougher new federal rules, researchers say there are too few regulators to oversee today's megaproduction facilities.

An FDA spokeswoman said the two recalls are related. The strain of salmonella causing the poisoning is the same in both cases, salmonella enteritidis.

The eggs recalled Friday were distributed under the brand names Hillandale Farms, Sunny Farms, Sunny Meadow, Wholesome Farms and West Creek. The new recall applies to eggs sold between April and August. Whitaker reports that the cartons are stamped with plant numbers p-1860 and p-1663.

A food safety expert at Cornell University in Ithaca, N.Y., said the source of the outbreak could be rodents, shipments of contaminated hens, or tainted feed. Microbiology professor Patrick McDonough said he was not surprised to hear about two recalls involving different egg companies, because in other outbreaks there have also been multiple sources.

"You need biosecurity of the hen house, you want a rodent control program and you want to have hens put into that environment that are salmonella free," McDonough said.

The salmonella bacteria is not passed from hen to hen, but usually from rodent droppings to chickens, he added. This strain of bacteria is found inside a chicken's ovaries, and gets inside an egg.

CDC officials said Thursday that the number of illnesses related to the outbreak is expected to grow. That's because illnesses occurring after mid-July may not be reported yet, said Dr. Christopher Braden, an epidemiologist with the federal Centers for Disease Control.

Almost 2,000 illnesses from the strain of salmonella linked to both recalls were reported between May and July, almost 1,300 more than usual, Braden said. No deaths have been reported. The CDC is continuing to receive information from state health departments as people report their illnesses.

The most common symptoms of salmonella are diarrhea, abdominal cramps and fever within eight hours to 72 hours of eating a contaminated product. It can be life-threatening, especially to those with weakened immune systems.

The form of salmonella tied to the outbreak can be passed from chickens that appear healthy. And it grows inside eggs, not just on the shell, Braden noted.

The key information for consumers to look for is the plant number, which is displayed at the side of the carton, CBS News medical correspondent Dr. Jennifer Ashton. said. The numbers to avoid are 1026, 1413, 1720, 1942 and 1946.

The dates (recorded in the "Julian format") range from 136 to 225, according to a statement by the Egg Safety Center. For example, eggs in a carton marked with the number P-1026 137 should not be eaten.

Ashton gave some basic tips to minimize risk of salmonella from eggs:

• Avoid consuming raw or undercooked eggs.
• Don't cook with eggs sitting out for more than two hours.
• Always wash your hands after handling egg products.
• If in doubt, throw it out. If you don't know where your carton came from, get rid of it.

Thoroughly cooking eggs can kill the bacteria. But health officials are recommending people throw away or return the recalled eggs.