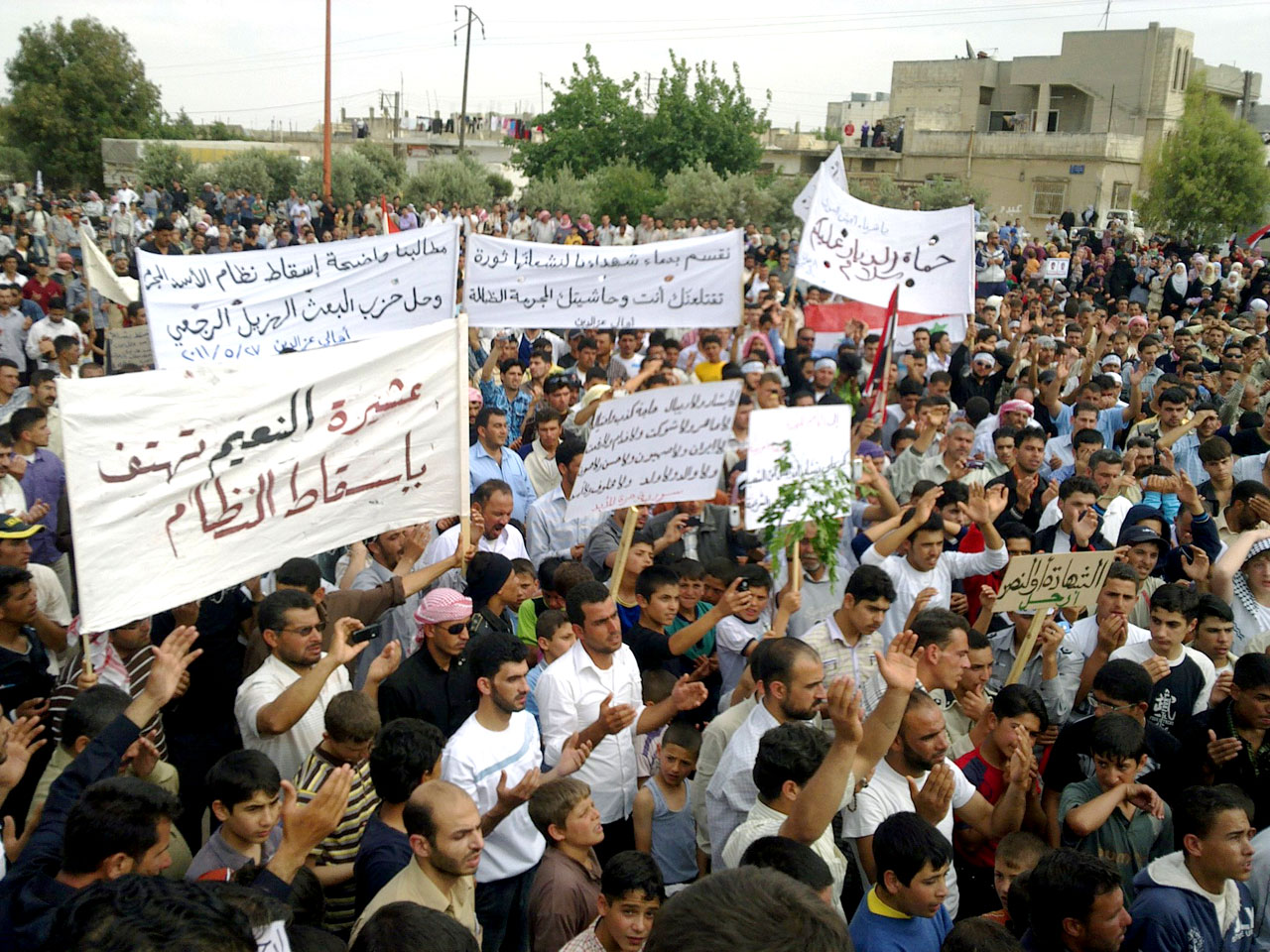 The escalation raised fears the popular uprising may be moving toward a Libya-style armed conflict.

Until now, the opposition against Assad has taken the form of peaceful protests by unarmed demonstrators, though authorities have claimed, without offering solid proof, that it was being led by armed gangs and propelled by foreign conspiracies.

Activists said residents of the towns of Talbiseh and Rastan, which have been under attack since Sunday in central Homs province, decided to fight back with automatic rifles and rocket-propelled grenades, and at least four civilians were killed.

"They felt that they cannot sit back any more and pray for God to help them," said one Homs resident who has wide connections in the province. He, like all residents contacted by The Associated Press, spoke on condition of anonymity for fear of reprisals.

Another two bodies were found early Monday in the area of Bab Amro cemetery, raising the death toll from the two-day crackdown in the country's turbulent heartland to 15, said the Local Coordination Committees in Syria, which helps organize and document the protests. State media said four soldiers were killed.

"The army is facing armed resistance and is not able to enter the two towns," the Homs resident said. "The army is still outside the towns and I was told that army vehicles, including armored personnel carriers, were set on fire."

A second activist confirmed residents had fought back, but said it involved individual residents protecting themselves, as opposed to an organized armed resistance with an overall command structure.

"The protests began peacefully but the practices of security forces that humiliated the people eventually led to the use of arms," he said. He said it was common for Syrians to have light weapons such as rifles in their homes, adding that in recent years weapons have been smuggled in from neighboring countries such as Lebanon and Iraq.

Homs has seen some of the biggest demonstrations against Assad since protests broke out in southern Syria in March and spread across the country — posing the most serious challenge to the Assad regime's 40-year rule.

What began as a disparate movement demanding reforms has erupted into a resilient uprising seeking Assad's ouster. Human rights groups say more than 1,000 people have been killed in the crackdown, which has drawn condemnation and sanctions from the United States and European Union.

Monday's accounts were the first credible reports of serious resistance by residents taking up arms. It is not clear how widespread such resistance might be elsewhere, though there have been some reports of civilians fighting back in the town of Talkalakh near the border with Lebanon and the government and several rights group say more than 150 soldiers and policemen have been killed since the unrest began.

Details coming out of Syria are sketchy because the government has placed severe restrictions on the media and expelled foreign reporters, making it nearly impossible to independently verify accounts coming out of the country.

The Local Coordination Committees in Syria said Assad's fighters hit Tabliseh with artillery early Monday and that snipers were deployed on the roofs of mosques. Syrian troops, backed by tanks, have been conducting operations in Tabliseh, Rastan and the nearby town of Teir Maaleh since Sunday.

"The situation is completely hopeless," said a resident of Rastan reached by telephone who said he was barricaded in his home.

"There are dead bodies in the streets and nobody can get to them ... The town is completely surrounded by tanks," he shouted before the line was cut.

Assad's use of the military signals he is determined to crush the revolt, despite U.S. and European sanctions, including an EU assets freeze and a visa ban on Assad and nine members of his regime.

In Geneva, the U.N.'s top human rights official said Monday the brutality and magnitude of repression in Syria and Libya against anti-government protests is "shocking."

Navi Pillay, the U.N. High Commissioner for Human Rights, said the crackdown in the two countries was marked by an "outright disregard for basic human rights."

He urged the Syrian government Monday to allow a U.N. fact-finding mission to visit the country. The team has been awaiting Syria's reply since requesting a visit on May 6.