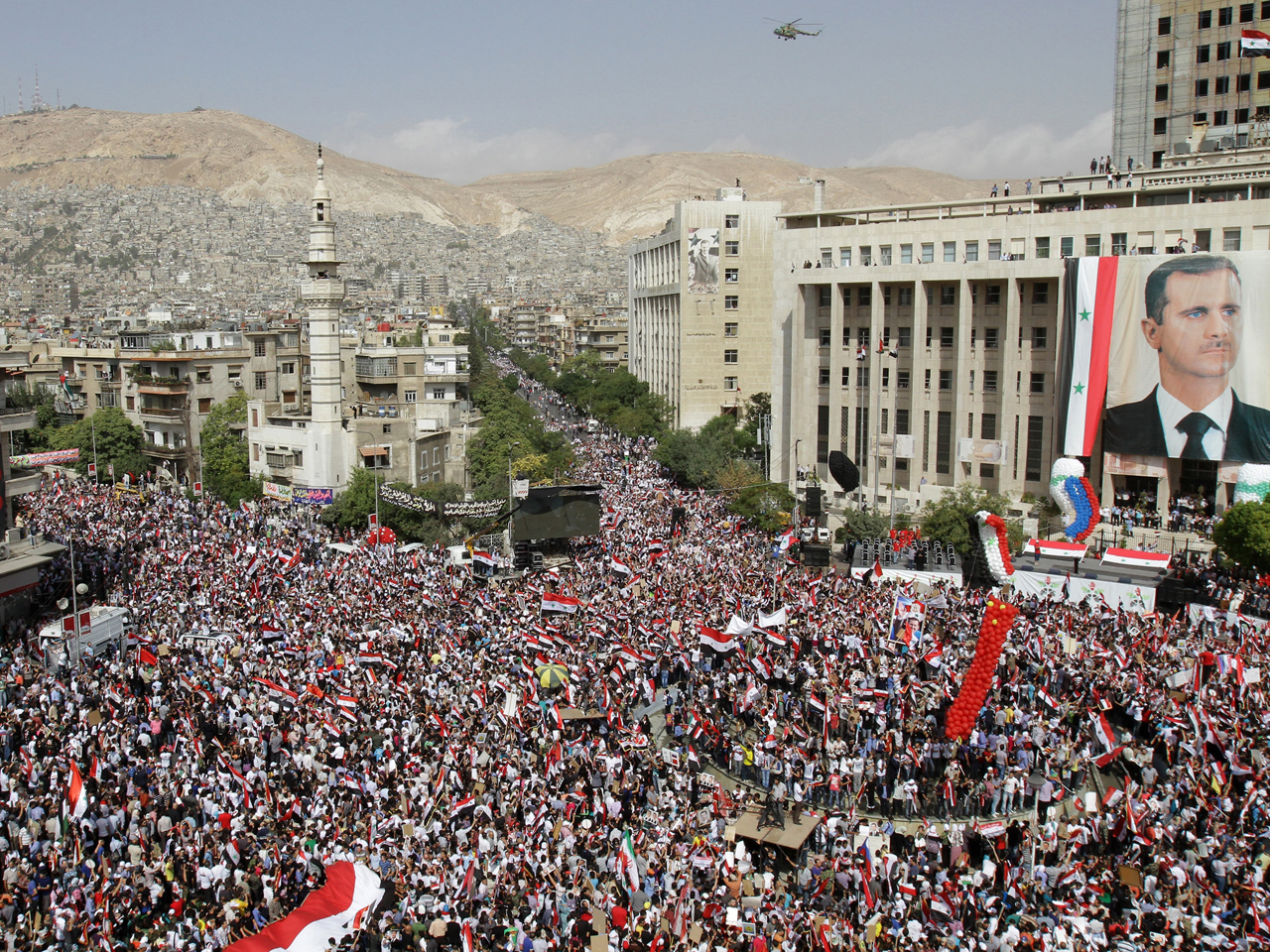 Hundreds of thousands of ecstatic supporters of the Syrian President crowded the streets of Damascus Wednesday to show their loyalty, as the country remained divided by seven months of unprecedented protests that have left almost 3,000 people dead in the most serious challenge to Bashar al-Assad's 11-year rule.

"With our souls and blood we sacrifice ourselves for Assad," chanted the crowds, waving Syrian flags and carrying pictures of their president, who has pledged to defy international calls urging him to step down.

"I walked kilometers to show Bashar al-Assad that I support him forever," said Samar, in her 30s, who proudly wore a baseball cap with Assad's face emblazoned on it. Some young women had painted hearts on their cheeks with a message to Assad: "We love you."

The march, aired live on Syrian national television channels, was organized by some 60 private internet media groups and NGOs also to send a message of thanks to Russia and China, which "support the reform process" Assad's government has embarked on, according to Kareem Wared, one of the organizers.

The Damascus demonstration, which denounced mounting foreign pressure on Syria, was so big that brought traffic to a standstill and forced shops and schools to close. The scale of this movement to back Assad is huge, and not limited to Damascus.

Middle East experts say Assad remains in control of his nation - thanks in part to a broad spectrum of Syrian society which hasn't turned against him; from business owners dependent on the regime, to minority Christians worried about the rise of Islamist powers should Assad fall.

Support for Assad is especially strong in Syria's two largest cities, Damascus and Aleppo, where residents are wealthier and have been shielded from the worst of the government's crackdown.

Fear of what comes after Assad is another rallying factor for some citizens living under a regime whose collapse could result not only result in civil war, but regional upheaval, given Assad's close ties with Iran, the Lebanese Shiite militia Hezbollah, and the Palestinian militant group Hamas.

The ordinary support on the street also has an effect. Many Syrians, from a variety of backgrounds, believe the government line that the unrest and violence is caused by armed gangs, Islamists, and a foreign conspiracy against the country.

Despite some reports over a slight split in the army, no defections of diplomats or key government ministers have been reported.

"Allah , Syria and only Bashar," chanted the crowed in Damascus as helicopters hovered overhead. Men and women joined hands to dance the traditional dabkeh as trumpets and darbaka drums played.

The rally comes one day before the establishment of a special committee to draw up a new constitution, according to Muhammed Buheytan, deputy head of the Syrian ruling Ba'th party. The draft constitution should be passed by a two-thirds majority in Parliament and approved in a national referendum.

Syria's current constitution states that the Ba'th party is the "leading power" in the country. The Syrian opposition, which has criticized Assad for his reluctance to implement the promised reforms, has demanded that the new law guarantee a democratic multi-party political system in Syria.

The marchers came from across social and national divides. Men, some in soldier-like attire, women, students, farmers and businessmen all came together to chant slogans pledging loyalty to the Syrian leader.

More than 2,900 civilians -- as well as several hundred soldiers -- have been killed in a spiral of violence that has gripped Syria since protests broke out on March 15, according to the United Nations. Syrian officials give a lower toll, saying some 1,500 people have been killed, half of them from the security forces.

Wednesday's massive show of support suggests international pressure is having a limited impact, and the scale of that support has surprised even Assad's critics.

Syria hailed last week's vetoes by China and Russia of a U.N. Security Council resolution aimed more sanctions at the Assad regime and a new umbrella opposition group, the Syrian National Council, last week gained no recognition at any level even from the west.

On Sunday, Syria's Grand Mufti, Ahmad Badreddine Hassoun, warned the U.S. and Europe against military intervention in his country and vowed to retaliate with suicide bombings if Damascus comes under attack.

Despite the mounting international pressure on Assad, his regime has been unrelenting in its crackdown.

The Syrian government said Tuesday it had arrested more than 140 alleged terrorists in the city of Homs, which has become a hotbed of opposition. Activists tell the Associated Press at least three people were killed in the raids.

Officials claim large quantities of firearms and explosives were confiscated, included AK-47 assault rifles, pump-action shotguns and handguns. Dozens of motorbikes with no license plates were also seized in addition to a number of vehicles, including one which was allegedly rigged with explosives.

This story was filed by CBS News' George Baghdadi in Damascus.