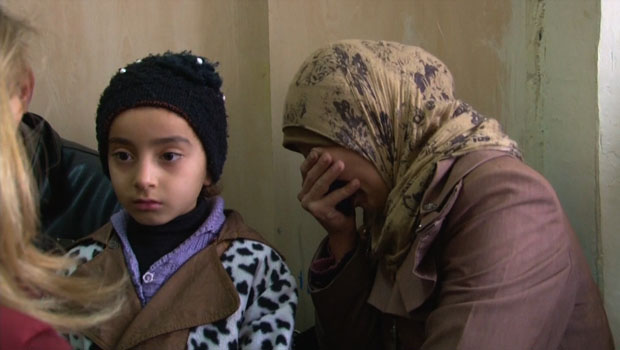 More than two million refugees have fled the war in Syria.

A Syrian family on the Turkish border described a diabolical new weapon that the Assad dictatorship is using against civilians.

The Haj Ali family fled Aleppo this week, walking and hitchhiking for two days to reach the safety of Turkey.

An internet video is thought to show the aftermath of the attack on Ard al-Hamra - though CBS News could not verify it.

Barrel bombs are cheap and crudely made -- a simple container packed with explosives and scrap metal.

Juma Haj Ali said they destroy everything for 200 yards in either direction.

His daughter-in-law Ulla said the bombs rained down on them for two days.

There were dead bodies everywhere she said. The children can't take it anymore, they're terrified, she said.

Ulla's husband and the children's grandmother are both missing.

Unlike rockets or mortars which can be aimed, barrel bombs kill large numbers of people indiscriminately.

A video apparently captured by a Syrian government soldier shows how they are thrown from helicopters with no regard for what - or who - they hit.

Juma said he has seen people decapitated by barrel bombs and others lose their limbs.

On Sunday, he said, one of the bombs wrecked the family's home. When the dust cleared, he couldn't find his wife.

He told us he prays to God that somehow she survived.