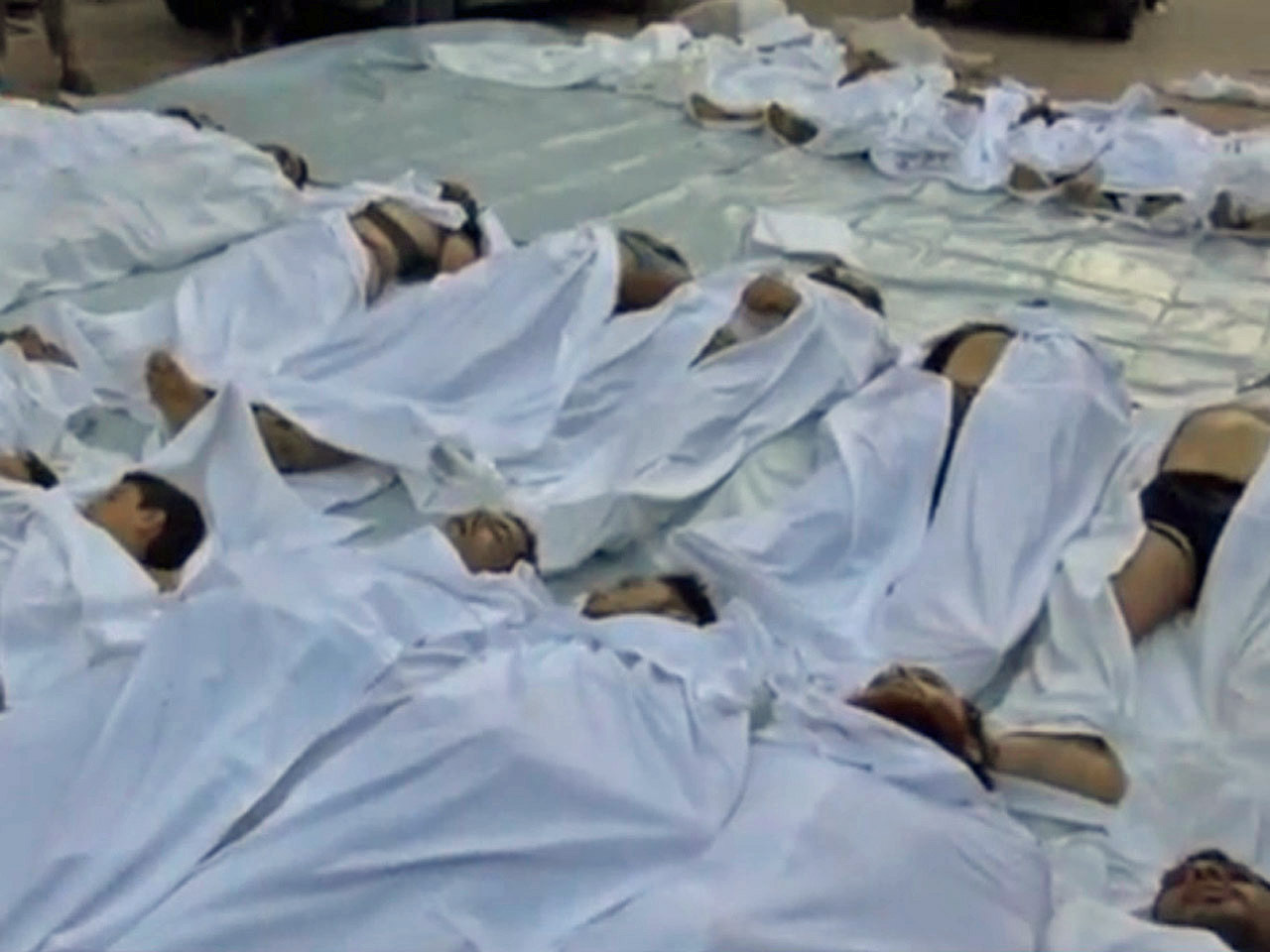 BEIRUT The Syrian opposition said Wednesday that state security forces had launched intense artillery and rocket barrages on the eastern suburbs of the capital Damascus, claiming that hundreds of people died in what was being called a "poisonous gas" attack.

The attack coincided with the visit by a 20-member U.N. chemical weapons team to Syria to investigate three sites where chemical weapons attacks allegedly occurred during the past year. Their presence raises questions about why the regime - which called the claims of the attack Wednesday "absolutely baseless" - would use chemical agents at this time.

In a statement, White House spokesperson Josh Earnest said the U.S. is deeply concerned by reports chemical weapons use in Syria, and that the Obama administration is "working urgently to gather additional information.

"If the Syrian government has nothing to hide and is truly committed to an impartial and credible investigation of chemical weapons use in Syria, it will facilitate the U.N. team's immediate and unfettered access to this site," Earnest said.

The Egypt-based Arab League condemned the "horrific attack" against civilians and called for an investigation.

The statement also asked the U.N. to investigate, and asked that weapons inspectors already in the country be given immediate access to the site.

CBS News' Pamela Falk reports the United Nations Security Council is holding emergency consultations Wednesday afternoon to discuss the reports. Reuters reports the U.N. team in Syria has already begun talks with the Assad regime about the incident, although whether they were discussing access to the site is unclear.

George Sabra, deputy head of the Western-backed Syrian National Coalition, said at a news conference that 1,300 people were killed as shells rained down on the capital's eastern suburbs of Douma, Jobar, Zamalka, Arbeen and Ein Tarma.

The opposition Local Coordination Committees said hundreds of people were killed or injured in the shelling, and a nurse at a health center in Douma put the death toll at 213.

The varying death tolls, which are common following attacks in Syria due to the government's refusal to allow independent news reporting, could not be immediately reconciled.

There were also conflicting reports as to what exactly transpired. Syria's Information Minister called the activists' claim a "disillusioned and fabricated one whose objective is to deviate and mislead" the U.N. mission.

"Many of the casualties are women and children. They arrived with their pupil dilated, cold limbs and foam in their mouths," nurse Bayan Baker told the Reuters news agency. "The doctors say these are typical symptoms of nerve gas victims," she said.

Even the unverified claims of a mass-chemical attack in Syria will add urgency to the debate within the Obama administration over whether and how the U.S. government should seek to intervene in the crisis, which has claimed more than 100,000 lives during the past two years.

Gen. Martin Dempsey, chairman of the Joint Chiefs of Staff, told a Democratic member of the House of Representatives in a letter leaked to the media thatmilitary intervention had essentially been ruled out because there wasn't yet an opposition cohesive and trustworthy enough to fill the void if President Bashar Assad's regime is toppled.

"Syria today is not about choosing between two sides but rather about choosing one among many sides," Dempsey said in the letter Aug. 19 to Democratic Rep. Eliot Engel. "It is my belief that the side we choose must be ready to promote their interests and ours when the balance shifts in their favor. Today, they are not."

Videos uploaded to social networking websites showed dozens of dead people of all ages lying on sidewalks and inside buildings, their bodies showing no obvious signs of injury. In one video allegedly shot in the Ghouta area, where all the suburbs allegedly targeted are located, at least a dozen young children's bodies were lined up on the floor.

Other videos showed toddlers convulsing and foaming from the mouth as people tried to wash their faces with bottled water. None of the videos could be independently verified.

In total, an area covering at least two square miles appeared to have been affected, based on the purported locations of the videos posted online. To date, there have been many claims of small-scale, localized chemical attacks in Syria, but the videos which emerged Wednesday suggested a possible wider dispersion of toxic agents.

Syrian President Bashar Assad's regime acknowledged a fresh government offensive against "jihadists" in the Ghouta suburbs on Wednesday, but vehemently denied the use of any chemical weapons.

"We are making a great advance in Jobar, Zamalka, Ghouta and Mouadamieh, which are under the heaviest attack since the start of the two-year conflict," a Syrian security source told CBS News' George Baghdadi.

"The army will bring very good news to the Syrian people very shortly when we get rid of those jihadists. The operation has just started but I don't think it is going to last for long," the source told CBS News. While there are a huge number of al Qaeda-linked militants fighting against Assad's forces in the country, including many who have joined the fight from neighboring Iraq and other nations, the Assad regime has consistently sought to portray all opposition forces in Syria as "jihadists" and "terrorists".

A Syrian official told Baghdadi that claims the government was using chemical weapons, however, were "absolutely untrue."

"The army will never use chemical gas on the Syrian people, if it does exist anyway," said the source. Syria's government has never officially acknowledged even possessing chemical weapons, although the regime is known to be in possession of significant stockpiles of various toxic agents, including Sarin gas.

"This is a media war but the way they think is really stupid," purported the official to Baghdadi. "Would you imagine that we would use chemical weapons where a UN team is here to inspect?" he questioned, referencing an international team of inspectors which arrived in the country just three days earlier.

"The main target is to to divert the attention of the UN team from their main goal and also to cover up the losses the rebels are facing all over the country," he added.

The head of the U.N. inspection team, scientist Ake Sellstrom, told Swedish news agency TT on Wednesday that he also had only seen the evidence coming from online videos, but that "it sounds like something that should be looked into."

"It will depend on whether any UN member state goes to the secretary-general and says we should look at this event," Sellstrom told TT from Damascus. "We are in place."

Just hours after Sellstrom made the comments, French President Francois Hollande said in a regular cabinet meeting that the latest allegations of a chemical attack "require verification and confirmation," according to government spokeswoman Najat Vallaud-Belkacem.

Vallaud-Belkacem said Holland would ask the UN team to go to the site "to shed full light" on the allegations. CBS News correspondent Holly Williams reported, however, that it wasn't immediately clear whether the Syrian government would grant the UN team access to the Ghouta suburbs to gather evidence.

Ahmed al-Jarba, the head of the Western-backed Syrian National Coalition, and the London-based Syrian Observatory opposition group also called on the U.N. team to investigate the incidents.

Hamish de Bretton-Gordon, a British expert in chemical and biological weapons, told CBSNews.com on Wednesday that, based on the reported death tolls and the available video evidence -- which he stressed he could not authenticate independently -- it appeared that a weapon of mass destruction like Sarin gas was probably involved.

In many of the smaller-scale attacks across Syria, de Bretton-Gordon has said small quantities of Sarin, or far weaker organophosphate compounds, could have been to blame, and it is feasible that poorly-trained rebel forces could have been behind such attacks.

"Sarin is 4,000-times more powerful than organophosphates," he explained, suggesting that if the toxic gas was used Wednesday on a large scale, it was "very unlikely" that opposition fighters could have been behind the attacks, as they "just don't have access to that level of chemical weapons and the delivery means" needed to disperse them so widely.

Damascus, the sprawling ancient capital city and President Assad's base of power since the conflict erupted, had come under increasing pressure from rebel forces, which had tried to advance on the city center primarily from the east.

Baghdadi reported that, according to eyewitnesses, the fierce military offensive began around 7:00 a.m. on Wednesday. One man said he counted about seven air raids and dozens of shelling targeting the district of Jobar, less than one mile from a main square in the capital.

The sites they were meant to probe are the village of Khan al-Assal just west of the embattled northern city of Aleppo and two other locations, which are being kept secret for security reasons.

The Syrian government has always denied claims by the opposition of chemical weapons use, saying rebels fighting to overthrow Assad's government have used such weapons.