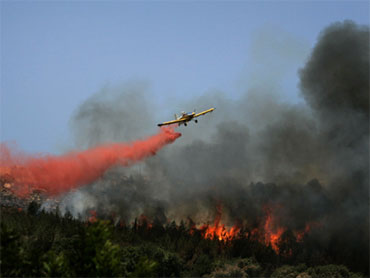 Israeli defense officials said Wednesday they believe Hezbollah has Scud missiles that could hit all of Israel, a day after Israel's president accused Syria of supplying the Lebanese guerrillas with the weapons for the first time.

U.S. intelligence officials confirmed to CBS News that Syria is transferring Scuds to Hezbollah, the Iranian-backed Lebanese militia that battled Israel to a stalemate during a monthlong war in 2006

Israeli officials say the introduction of Scuds could alter the strategic balance with Hezbollah.

President Shimon Peres, speaking in Paris, charged that Syria is playing a double game, talking about peace, while "it is delivering Scuds to Hezbollah to threaten Israel," according to a statement from his office.

The remarks by Peres, whose position is largely ceremonial, went beyond public assessments of senior Israeli defense figures. He gave no details.

In Washington, the Syrian Embassy dismissed the allegations and accused Israel of trying to divert attention from questions about Israel's nuclear program. Israel is widely believed to possess nuclear arms, though it does not confirm or deny this.

"If we are to discuss armament in our region, we should begin with Israel's massive nuclear weapons arsenal and continuous arming with top-caliber U.S. weapons, which helps perpetuate its occupation of our territories," said embassy spokesman Ahmed Salkini. "The timing also indicates a sinister attempt to undermine any U.S.-Syrian rapprochement."

In Washington, State Department spokesman P.J. Crowley expressed concern but did not confirm that Hezbollah now has Scud missiles.

"Regardless of the issue of Scuds, we remain concerned about the provision of increasingly sophisticated weaponry to parties, to Hezbollah, and this is an issue that we continue to raise with Syria," he said, adding that such weapons endanger Lebanon's security.

Some Scud missiles have a range of hundreds of miles (kilometers) and could reach any target in Israel if fired from Lebanon. They can carry an explosive warhead of up to 1 ton.

The defense officials, speaking on condition of anonymity because they were discussing a classified intelligence assessment, stopped short of stating unequivocally that Scuds are now deployed in Lebanon.

They said tensions have risen along Israel's border with Lebanon after media reports that Hezbollah was seeking the missiles, and they believed Hezbollah now has them.

Defense Minister Ehud Barak issued a statement urging the public to remain calm, but said "the introduction of systems that disturb the balance endanger stability and calm."

Israel charges that most of Hezbollah's weapons, including rockets, come through neighboring Syria, which is a main sponsor of Hezbollah, along with Iran. But Peres' statement was the first time Israel has publicly accused Damascus of providing Scuds.

At the U.N., deputy U.S. ambassador Alejandro Wolff alluded to the reported transfer of Scuds from Syria to Hezbollah. "We are increasingly concerned about the sophistication of the weaponry being transferred," he said.

President Barack Obama is interested in restoring U.S. relations with Syria, frozen after charges from the previous administration that Damascus was aiding anti-American forces in neighboring Iraq.

Some Republican senators have said they may hold up the confirmation of Robert Ford, the Obama administration's nominee to be the first U.S. ambassador to Syria in five years, over the concerns.

Hezbollah pelted Israel with nearly 4,000 unguided Katyusha rockets during the 2006 war, causing widespread damage and dozens of casualties in Israel's north. Scud missiles have several times the range and explosive firepower of Katyusha rockets and would pose a much more serious threat.

In 1991, Saddam Hussein's Iraq struck Israel with 39 Scud missiles as the U.S. and its allies invaded his country. Fourteen Israelis were killed during the conflict.

Israel has deployed an anti-missile system called Arrow, designed to intercept missiles from Iran and possibly Syria. It has successfully tested a system to stop shorter-range missiles and rockets like Scuds and Katyushas, as well as homemade rockets fired from Gaza, but it is not yet operational.

Boaz Ganor, an expert from Herzliya's Interdisciplinary Center, said Scud missiles in the hands of Hezbollah could be a game-changer, not only because of their potential for damage.

"In Syrian hands, it was rationally administered, and now it's not clear that in the hands of Hezbollah it will be administered rationally," he said.