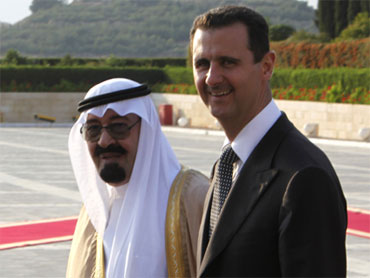 This story was filed by CBS News' George Baghdadi in Damascus.

Saudi Arabia's king arrived Thursday in Damascus to try work with his Syrian counterpart, President Bashar Al-Assad, to defuse the potentially explosive situation over the possible implication of Hezbollah in the murder of former Lebanese Prime Minister Rafiq Hariri.

Sayyed Hassan Nasrallah, the leader of Hezbollah -- a Muslim group backed by Syria and Iran -- has made recent television appearances saying clearly that his organization would not accept any blame and would fight against the charges.

Nasrallah's remarks have sparked fears of a sectarian conflict between Sunnis and Shiites in Lebanon similar to one that brought the country close to civil war in 2008.

U.S. Assistant Secretary of State Philip Crowley said on Wednesday that Syria should play a more constructive role to ease the tension.

"Syria should distance itself from Iran and listen attentively to what the Saudi King would tell him," Crowley told reporters.

Damascus slammed his statement on Thursday as "interference," saying no one could know better how to handle regional affairs than the countries in the region.

"The Ministry of Foreign Affairs expresses astonishment over the statement of the U.S. spokesman. It is not Washington's duty, and it has no right, to determine our relationship with the regional countries and interfere in the content of the Saudi King's talks during his visit to Damascus," said a statement from the Syrian government.

"Syria and Saudi Arabia are independent states which belong to this region and know better than any the interests of the people of this region, (and) how they should work to achieve these interests away from any external interference," the statement concluded.

Nasrallah, whose group fought a month-long war with Israel in 2006, views the possible accusations as an Israeli attempt to destabilize Lebanon.

Some witnesses have actually recanted, and four pro-Syrian Lebanese generals, jailed after Hariri's murder, were released last year for lack of evidence.

Hezbollah, whose military organization is more powerful than the Lebanese army, was not expected to hand over any suspects. Nor will the government be in a position to arrest anyone.

For years, however, Hariri's supporters maintained - and United Nations investigators indicated - that elements in the Syrian regime, which controlled Lebanon at the time, were behind the killing.

Anti-Syrian protests and international uproar over the assassination led to the establishment of a U.N. tribunal and forced Damascus to withdraw its troops after nearly 30 years boasting a huge military presence in Lebanon.

Though there is no immediate confirmation from Damascus, both Abduallah and Assad are expected to visit Beirut on Friday for a summit with Lebanese President Michel Suleiman -- an urgent attempt to ease political and domestic tension and preserve stability.

Relations between Syria and Lebanon have been on the mend since 2008 when diplomatic ties were established for the first time and Prime Minister Saad Hariri has made four trips to Syria in the past eight months.

"The most immediate question concerns the possibility of another Israel-Hezbollah war, fears of which have mounted throughout this year, fueled by reports of new missile transfers to Hezbollah and intermittent threats from Israel," says Paul Salemm, a Beirut-based Mideast expert.

"Those who foresee war argue that Israel is unwilling to tolerate a heavily-armed Iranian proxy on its border while tensions with Iran over the nuclear issue remain unresolved," Salemm adds.