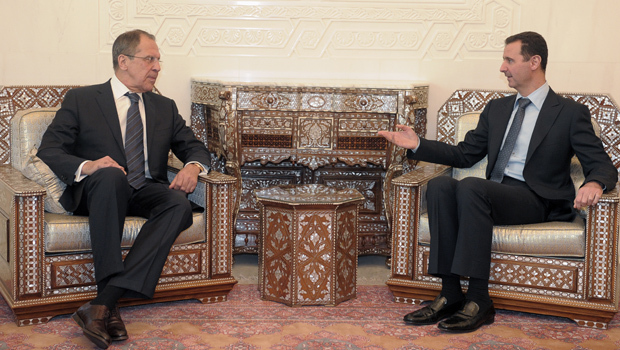 BEIRUT President Bashar Assad's government on Tuesday accepted a Russian plan to turn over its chemical weapons stockpile as momentum mounted for a proposal that could avert American strikes against the regime. The U.S. and France turned to the United Nations for a resolution to ensure Damascus complies.

With domestic support for a strike uncertain in the United States and little international appetite to join forces against Assad, the developments had the potential to blunt a thorny diplomatic problem and allow the Obama administration to back away from military action.

But neither effort attempts to end or even address the civil war that has left more than 100,000 dead in Syria and the main opposition bloc dismissed the chemical weapons plan as a largely meaningless measure that would allow Assad free rein to fight on with conventional weapons.

Syria's foreign minister said the government would accept a plan from Russia, its most powerful ally, to give up its chemical weapons in order "to thwart U.S. aggression," offering a diplomatic option for how to respond to the Aug. 21 chemical weapons attack that the Obama administration, France and others blame on Assad.

The Russian proposal for Syria to place its chemical weapons stockpile under international control "can work only if we hear that the American side and all those who support the United States in this sense reject the use of force," President Vladimir Putin said on Tuesday.

Damascus denies its forces were behind the attack. The U.S. has said more than 1,400 Syrians died; even conservative estimates from international organizations put the toll at several hundred.

France, a permanent member of the 15-nation Security Council, will start the process at the United Nations on Tuesday under Chapter 7 of the U.N. Charter, which is militarily enforceable, Foreign Minister Laurent Fabius said at a news conference organized shortly after meeting with the French president.

CBS News foreign affairs analyst Pamela Falk says "there are a lot of negotiations that have to take place -- on a rapid-fire timeline -- to get the Russia-U.S. proposal into a U.N. Resolution."

Falk, based at United Nations Headquarters in New York, said diplomats suggested the rest of Tuesday and Wednesday would likely be filled with bilateral meetings to see what parts of the French proposal can be worked into a draft resolution, "but there seems to be agreement by Security Council members on the big issues."

President Barack Obama threw his support behind the resolution even as he pushed the idea of U.S. airstrikes against Assad's regime if that effort fails. British Prime Minister David Cameron said his country would join France and the U.S. in putting forward the proposal.

Earlier, White House press secretary Jay Carney told CBS News the Russian proposal still represented only "the potential for positive development and has only come about because of the credible U.S. military threat that is out there."

CBS News White House correspondent Major Garrett reports that U.S. Secretary of State John Kerry told the House Armed Services Committee that the administration also wanted Congress to press ahead in consideration of a use-of-force resolution. He said it was yet to be determined "whether this has any meat on it," in reference to the Russian-Syrian proposal.

Fabius said the French resolution would demand that Syria open its chemical weapons program to inspection, place it under international control, and ultimately dismantle it. A violation of that commitment, he said, would carry "very serious consequences." The resolution would condemn the attack and bring those responsible to justice, he said.

Fabius expressed caution that French authorities "don't want to fall into a trap" that could allow Assad's regime to skirt accountability or buy time.

"We do not want this to be used as a diversion," Fabius said. "It is by accepting these precise conditions that we will judge the credibility of the intentions expressed yesterday."

CBS Radio News correspondent Elaine Cobbe reports that France has thus far steered-clear of U.N. resolutions on Syria, knowing that Russia would veto any significant measures. But with this new Russian proposal on the table, Fabius saw an opportunity. The move by Paris is seen as an effort to guarantee Assad follows through with what the Russians have proposed, and will include provisions for "extremely serious consequences" if he doesn't, according to Fabius.

The details and timeframe of the French proposal remained vague, but Fabius said he expected a "nearly immediate" and tangible commitment from Syria. Within two hours, he had a response from his Syrian counterpart, Walid al-Moallem.

"We agreed to the Russian initiative as it should thwart the U.S. aggression against our country," he said.

Moallem's comments amounted to the first formal admissions by top Syrian officials that Damascus even possesses chemical weapons. In an interview conducted Sunday by Charlie Rose, Assad again refused to admit that his government has stockpiles of chemical weapons estimated by many observers to include hundreds of tons of lethal chemical agents.

Russia is now working with Damascus to prepare a detailed plan of action that will be presented soon, Foreign Minister Sergey Lavrov said. Russia will then be ready to finalize the plan with U.N. Secretary-General Ban Ki-moon and the Organization for the Prohibition of Chemical Weapons.

President Barack Obama, who was scheduled to give a nationally televised address on Syria on Tuesday night, reached back into history - and the Cold War rivalry between the United States and the Soviet Union - to make his case against Syria, even as he cautiously welcomed the early developments.

"The key is, to paraphrase Ronald Reagan, that we don't just trust, but we also verify," Obama told CBS Evening News anchor Scott Pelley. "The importance is to make sure that the international community has confidence that these chemical weapons are under control, that they are not being used, that potentially they are removed from Syria and that they are destroyed."

Obama said the idea actually had been broached in his 20-minute meeting with Russian President Vladimir Putin last week on the sidelines of an economic summit in St. Petersburg, Russia. Obama said he directed Kerry to have more conversations with the Russians and "run this to ground."

The Syrian National Coalition dismissed the Assad government's turnaround as a maneuver to escape punishment for a crime against humanity. The coalition had been hoping for military strikes from abroad to tip the balance in the war of attrition between rebels and Assad's forces.

In a statement Tuesday, the coalition said Moscow's proposal "aims to procrastinate and will lead to more death and destruction of the Syrian people."

"Crimes against humanity cannot be dropped by giving political concessions or by handing over the weapons used in these crimes," the group said.

Syria's acceptance on Tuesday did not detail how any disarmament could be carried out, and analysts cautioned that it was those details that would make the offer credible.

"I don't think this proposal was developed and thought through. I think it came a little bit out of the blue to solve a political crisis," said Ralf Trapp, a disarmament consultant who worked for the Organization for the Prohibition of Chemical Weapons from 1997 to 2006. "Now we're in a situation where if we have political preparedness to go through with it, we now need to think in practical terms and that's where, as always, the devil is in the details."

But it was clear that many in the Mideast, Europe and the U.S. were cautiously seizing on the initiative as a way to untangle the diplomatic impasse before Obama takes the issue before Congress.

Britain's Cameron called the plan a "serious offer," and said he spoke to Obama about it Tuesday.

On Monday, Kerry said Assad could resolve the crisis by surrendering control of his chemical arsenal to the international community. Russia's Lavrov responded by promising to push Syria to place its chemical weapons under international control and then dismantle them quickly, to avert U.S. strikes. Syria's acceptance came less than 24 hours later.

Fabius said Russia had information about Damascus' chemical weapons stockpile, and expressed hope that this time a tough resolution on Syria would not be thwarted, alluding to efforts led by Western powers at the U.N. body in recent months that were blocked by Russia and China.

In Beijing, Chinese Foreign Ministry spokesman Hong Lei said of the Russian proposal: "As long as it eases the tension and helps maintain Syrian and regional peace and stability, and helps politically settle the issue, the global community should consider it positively."

The chief of the Arab League, Nabil Elaraby, also expressed support for the proposal, telling reporters that it has been always in favor of a "political resolution." The league has blamed the government for the attack, but says it doesn't support military action without U.N. consent.

Fabius also warned that finding and destroying "more than 1,000 tons of chemical weapons" would be very difficult and would require international verification amid Syria's civil war. He reiterated France's position that Assad must leave power: "We can't imagine that someone who was responsible for 110,000 dead, it is said, can stay in power forever."