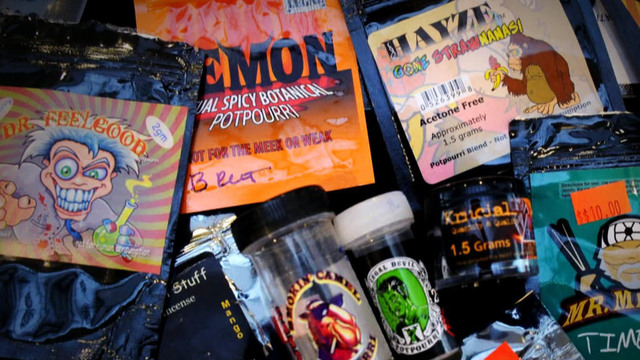 In New York alone, 2,300 people have ended up in emergency rooms in two months.

In the last 24 hours, agents seized two warehouses full of synthetic drugs in the Bronx -- one of the largest raids ever.

But with New York drug rings producing more than a quarter-million packets of synthetic marijuana, the bust is just a small dent in the problem.

"Over the last several years, our special testing labs have identified over 400 new synthetic drugs," according to Eduardo Chavez of the Drug Enforcement Agency.

Known by names like K2 or Spice, synthetic drugs are designed to mimic marijuana -- but with far more powerful effects.

"I have had routine heroin users tell me that they have tried Spice one time and hated it and told me they'd never try it again because it was too scary," Chavez said.

Part of the problem is the chemicals used to make the drugs are legally imported from China, sprayed on to ground-up plants here, and then smoked.

The drugs are cheap and easy to find, as a CBS News producer discovered at a bodega in Brooklyn.

In the last year, there's been a 229 percent hike in calls to poison control centers.

"This can cause kidney failure, it can lead to heart attacks, strokes, seizures which don't stop, that require a person to be put on a respirator," Lenox Hill Hospital emergency room doctor Robert Glatter told CBS News.

But there's an even more troubling threat: where the money from the sales of these synthetic drugs may be going.

"A lot of this money that is from the sale of Spice, hitting countries in the Middle East where we all know drugs fund terror," Chavez said. "A lot of Middle Eastern-owned shops where our investigations have revealed cash deposits going to countries of conflict, such as Yemen and Syria."

Sources at the DEA said an increased commitment from China is the key to cutting down the amount of chemicals entering the U.S. The agency hopes the issue can be added to the agenda for high-level talks later this month.