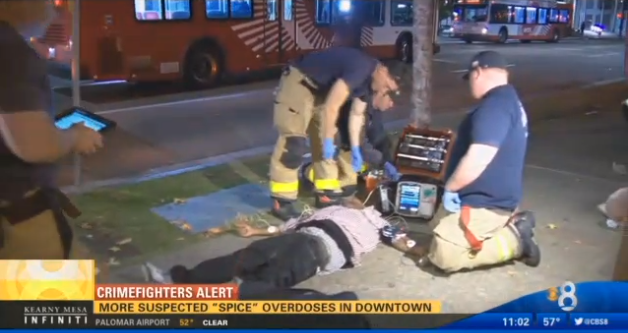 Officials in San Diego say at least 14 people were sickened this weekend by the synthetic marijuana drug called "Spice."

This is the second weekend in a row that police officers saw multiple overdoses in the area, bringing the total number of those sickened to around 30 people, CBS San Diego reports.

"Very similar to last weekend. In some of the incidents, we were able to recover remnants of Spice, the packaging and what appears to be a tobacco-like substance inside the packaging itself," said Sgt. Arthur Scott of the San Diego Police Department.

Police say Spice-makers spray chemicals on the product to make the user hallucinate.

The product falls into a legal gray area because it's not the leafy substance itself, but rather the added chemicals that make it illegal, which requires extensive testing.

"We're still trying to work through it and find out exactly where it's coming from. More importantly, get a sample of it and do a toxicology on it," said Sgt. Edwin Garrette of the SDPD.

Officers said that those hospitalized purchased Spice in packaging with a blue dragon or skull on the side. It is not yet clear if the cases are connected to the same dealer, but police say it does appear that users are buying in the same general location.

"We have everything from anxiety to rapid heartbeats. In some of the severe cases, we've had several patients unconscious, actively seizing and decreased respiratory rates," said Batt. Chief David Gerboth of San Diego Fire Rescue.

Several people who became ill passed out in the middle of the street.

According to the National Institute on Drug Abuse, the synthetic drug can also lead to suicidal thoughts and violent behavior. Synthetic marijuana also goes by names including K2, Joker, Black Mamba, Kush, and Kronic.

Selling synthetic cannabinoid compounds like Spice has been illegal in California since 2012.

Anyone with information on the drug or its makers was asked to call the SDPD at (619) 531-2000. All tips can be made anonymously.