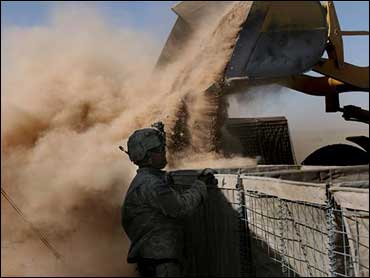 Swingley, of Lincoln, Mont., passed under the burled arch marking the finish line on Front Street in this Gold Rush town at 10:58 a.m.

His team of 11 dogs trotted down the snow-covered street as a light wind blew and cheering fans crowded the finish chute.

"This is a great team, they just kept getting better and better," Swingley said, patting the dogs.

Swingley is the only non-Alaskan ever to win the race.

As Swingley was planning for this year's race, he calculated that if everything went perfectly, it would take him 8 days, 17 hours to get from Anchorage to Nome.

"The run times were awful close to `perfect world' stuff," he said.

Mushers had relatively balmy conditions for the entire race, with sunny skies and temperatures often climbing into the 30s during the day.

Eighty-one teams began the race, which had its ceremonial start March 4 in Anchorage. By the time Swingley finished, 70 teams remained on the trail.

Swingley broke out of the pack early in the race, pushing himself far ahead of the other frontrunners before taking his 24-hour break. It's a strategy that helped him win the race in 1995 and 1999.

He was the first musher to arrive in the Interior village of Ruby, the half-way mark on the trail, and he never relinquished his lead for the remainder of the race.

Paul Gebhardt of Kasilof, Alaska, led the race for the first couple of days and tried to remain within striking distance in the second half. But by the time he reached White Mountain, 77 miles from the finish line, he was more than five hours behind Swingley.

"I was trying to catch him but I can't catch someone who's faster than me," Gebhardt said. "I really had thought of winning. I said at the start of the race the team could win. We just didn't have the speed."

"I get them prepared. I don't mess around," he said. "We just start camping out and end up doing lengthy training runs."

He breeds dogs that have super endurance and when he trains, he doesn't hold the dogs back.

"I just let them go wide open," he said. "They are really resilient."

Swingley decided to try and break his own record finish time when he reached the Koyuk checkpoint, 171 miles from the finish line. He drove his team for more than 10 hours to reach White Mountain on Monday, where teams are required to take an eight-hour rest.

"I'm way faster than he is," Swingley said. "He didn't chase me very hard. I didn't even see him."

The ever-confident Swingley didn't have much sympathy for the other mushers he left behind on the Iditarod trail.

"I gave them all an opportunity when the race started. We all had an even shot."