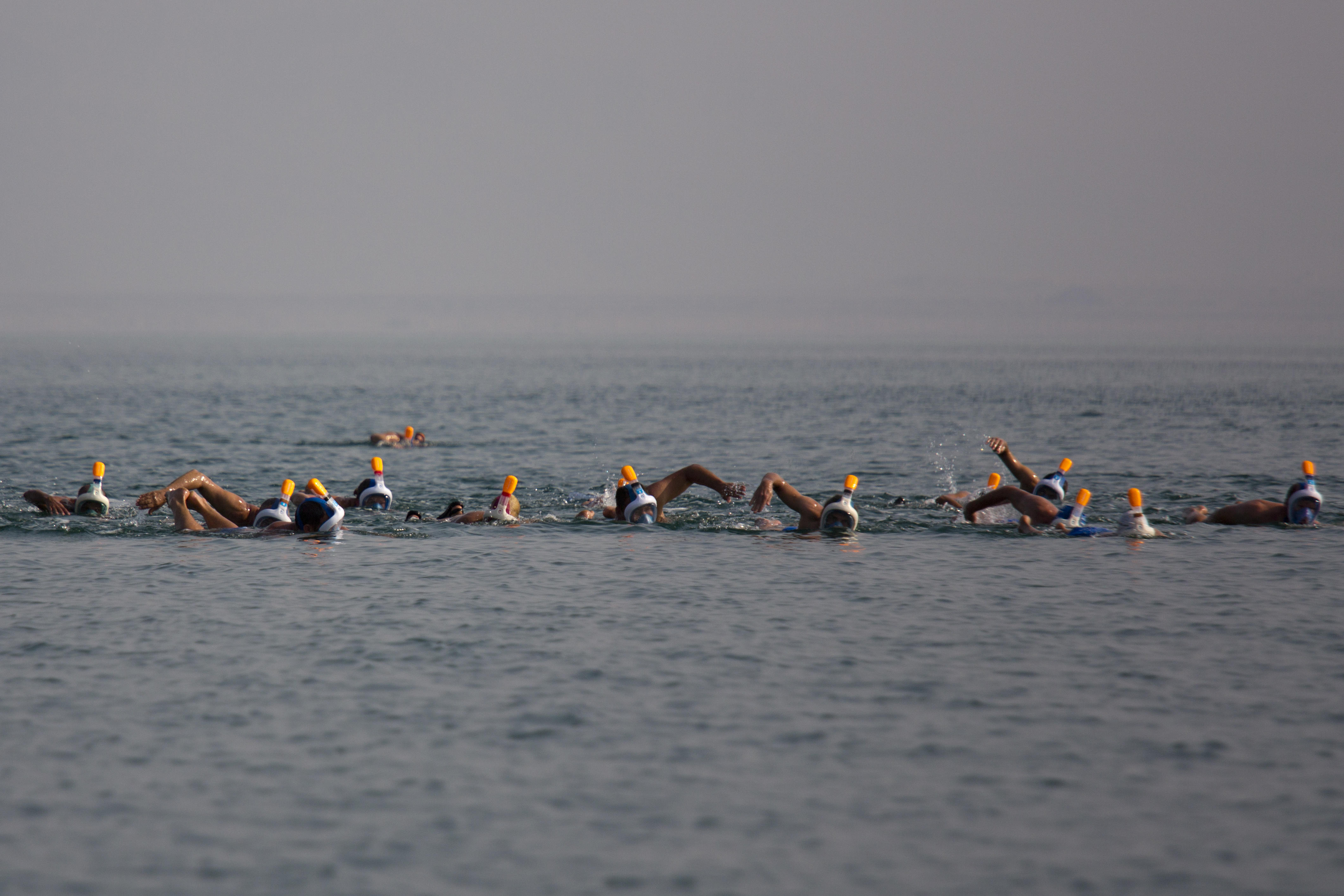 EIN GEDI, Israel -- A multinational group of swimmers swam seven hours through the salty, soupy waters of the Dead Sea on Tuesday in a bid to draw attention to the environmental degradation of the fabled lake.

At dawn, the 25 swimmers left on boats from Ein Gedi on the Israeli side of the Dead Sea to Wadi Mujib on the Jordanian side. Then, wearing special protective masks and snorkels, the swimmers paddled through the thick waters in what turned into an 11-mile swim from Jordan to Israel.

Swimming in the Dead Sea is unusual.

Tourists typically dip themselves from the beaches and float on the water with the help of the lake’s high salt concentration. It also draws people from around the world who believe the water’s high mineral content is beneficial for skin conditions.

The Dead Sea, the lowest place on earth at 1,388 feet below sea level, has shrunk significantly over recent decades, a process environmentalists blame on unsustainable water management and over-exploitation of the lake’s minerals.

“We’re here for the first ever Dead Sea swim challenge with 25 swimmers that come from all over the world to send out a clear message to save the Dead Sea, which is shrinking today at an alarming rate,” said Mira Edelstein, from the environmental group EcoPeace, one of the swim’s organizers.

Organizers say the Dead Sea’s water level has fallen more than 80 feet over the last three decades. The lake’s southern basin, disconnected from the shrinking northern side, has seen flooding in recent years because of heavy industrialization.

The swimmers, who hailed from Israel, the Palestinian territories and as far as New Zealand, South Africa and Denmark, wore special face masks to shield them from the briny water, which is painful to the eyes and can be deadly to ingest. The group was accompanied by support vessels with medical equipment and food.

Despite the tough conditions, only three swimmers failed to finish — two who suffered from dehydration and a third who complained of chills.

Four swimmers took breaks on the medical vessel. Palestinian lifeguard Yussuf Matari, 61, was treated with an IV as he rested in the shade of a boat’s tarp before plunging in to the waters again.

Jackie Cobell, a British long-distance swimmer, called the Dead Sea swim “historic and iconic,” before descending into the water. “This is really important because it’s disappearing fast.”

Those who neared the shoreline first waited so all could finish the race together. Speakers blared “We are the Champions,” the iconic hit by the English rock band Queen.

“I must say that I did not expect this swim to be so hard and what was really, really tough conditions is that salt. Constantly trying to get the salt out of your mask and the chafing,” said Jean Craven, a founder of “Madswimmer,” a South African charity that participates in open water swims around the world to raise money for children’s causes.

“This was a challenge, not a race,” he added. “It was really great to see the camaraderie, you know, everyone trying to bring the slowest swimmers along with them.”