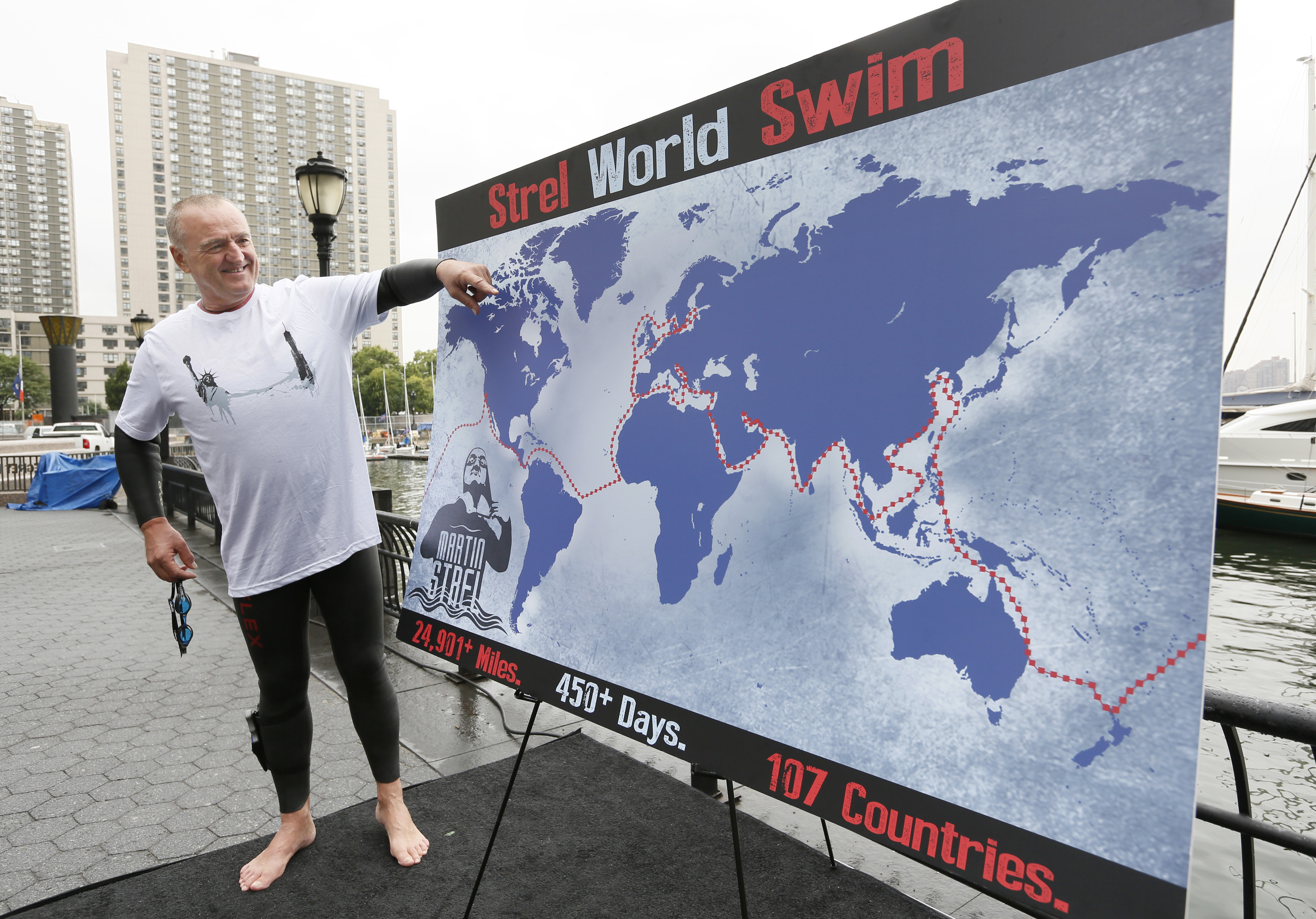 NEW YORK -- Martin Strel swims with a knife strapped to his right leg -- in case he encounters sharks, "vampire" fish and other deadly marine life in the world's wildest waters.

On Thursday, the 60-year-old marathon swimmer announced the toughest feat of his life: A 10,000-mile, around-the-world voyage on water to draw public attention to increasing aquatic pollution.

"And for peace and love," Strel added in his native Slovenian language.

He aims to circle the globe in about 450 days, starting in Long Beach, California, on March 22 and passing through oceans, rivers, canals and other bodies of water in more than 100 countries. He'll swim about 5 to 12 hours each day, depending on the weather and changing currents. An escort boat will offer emergency support and space for small breaks.

But first, Strel took a demonstration 2.2-mile dip in a choppy, rain-swept New York Harbor on Thursday, taking 63 minutes from the Statue of Liberty to a marina near the World Trade Center.

On the eve of the 9/11 terror attack anniversary, still in his wet suit, he bowed his head for a moment of silence to remember those who died in the complex that's now rising again.

Since 2000, Strel has swum the entire length of five rivers - the piranha-infested Amazon, the Danube in Eastern Europe, China's Yangtze, the Parana in South America, and the Mississippi.

Those daring forays have earned him the nickname "Big River Man."

A native of Slovenia, a small nation between Italy, Austria and Croatia, Strel now lives in Phoenix.

He's still finalizing details of his next big, multimillion dollar adventure, which will include the Panama and Suez canals, the English Channel, the Amazon again as well as the Atlantic and Pacific oceans and the Red Sea.

Costs, including overnight accommodations, plus food and other supplies, will largely be organized by the Arizona-based TDG global marketing and branding firm.

Strel won't be alone in the water. He says he welcomes anyone who's interested to join him for stretches of the route, including the president of Slovenia, Borut Pahor, who Strel said was a fine swimmer. "We'll all be discussing ecology - like how to eliminate plastics from water."

How does he rate the Hudson River that flows past the World Trade Center?

"It's not especially clean, but it's not dangerous, except for the boats, maybe," he said, compared to what he called "the most dangerous fish on the planet" - the tiny candiru in South America that bores into every human cavity, from the mouth to the ears and nose, growing by feeding on human flesh and blood.

By comparison, he said with a laugh, blood-thirsty piranhas "are OK" - but partially because those on the support boat poured buckets of blood into the Amazon to draw the fish away after they attacked him.

As for sharks, Strel said they've left him alone as long as he swam in the same direction, without confronting them. "I touch them and it's 'OK! I'm your friend.'"