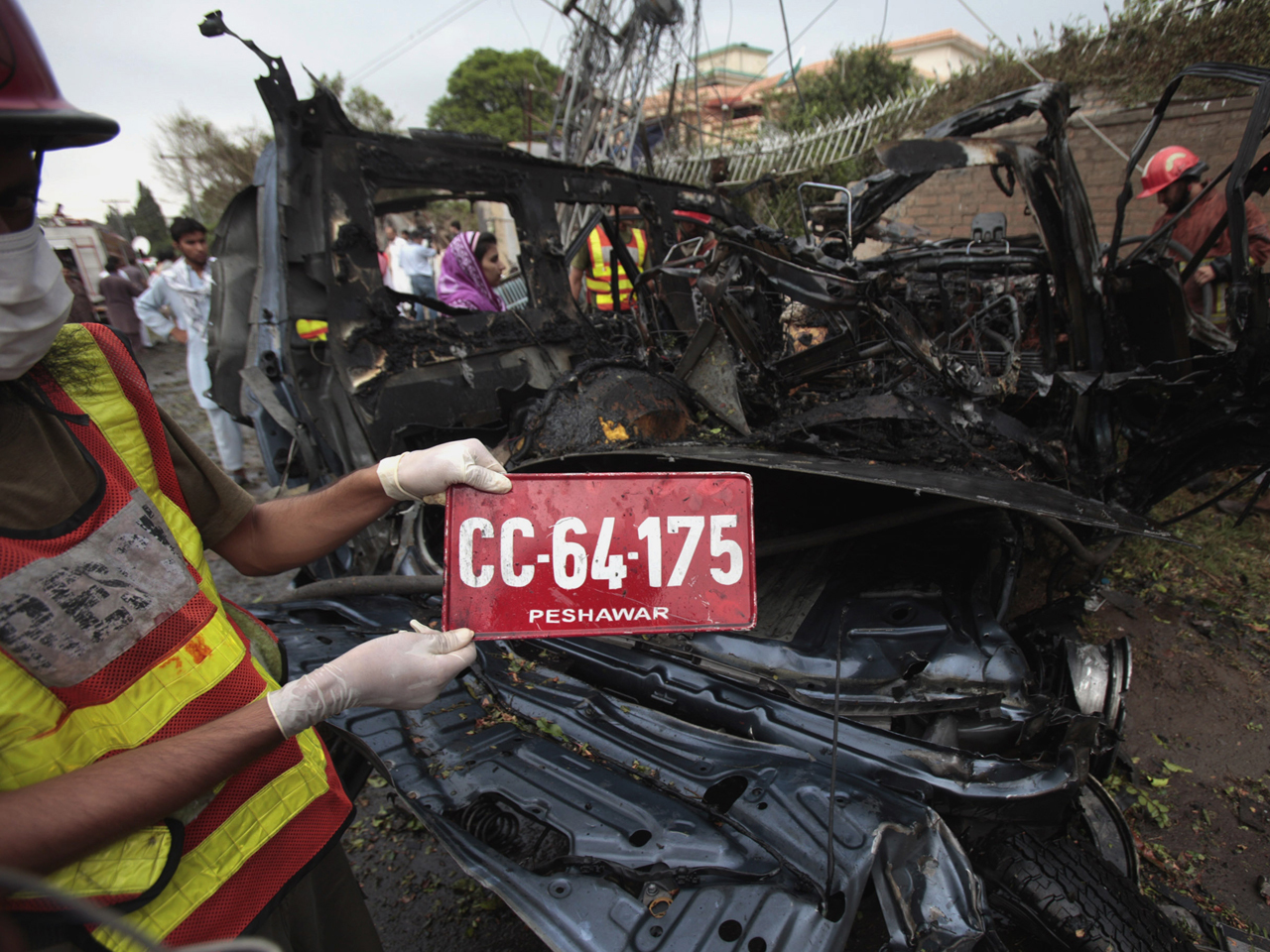 (CBS/AP) PESHAWAR, Pakistan - A suicide car bomber rammed into a U.S. government vehicle in the northwestern city of Peshawar on Monday, killing two Pakistanis and wounding more than a dozen — including two Americans — in one of the worst attacks against the U.S. in Pakistan in recent years, officials said.

Moments before the attack, a senior U.S. official tells CBS News, the driver of the U.S. consulate SUV became aware that a vehicle was racing toward them. Those few seconds of preparation allowed him to turn the van away from the approaching vehicle and thus avoid a head-on collision with the suicide bomber. That last-second evasive maneuver has been credited with preventing more fatalities.

The bombing was a vivid reminder of the danger of operating in Pakistan, especially in the northwest where Taliban and al Qaeda militants are strongest. The U.S. has persisted because its work in Pakistan is seen as key to countering militants who threaten American interests in neighboring Afghanistan and elsewhere.

The U.S. official tells CBS News that initial reports suggest the attackers were members of the Pakistan-based Haqqani terror network. The official ads, however, that the investigation is ongoing and Pakistan's Taliban movement may also have been behind the attack. The Haqqani network is known to have links to both the Taliban and al Qaeda's leadership.

It has been widely reported that an Aug. 24 U.S. drone strike killed Badruddin Haqqani, the organization's day-to-day operations commander and son of its founder Jalaluddin Haqqani, in Pakistan's North Waziristan tribal area. Intelligence officials in Pakistan and the U.S. have been quoted as saying Badruddin was killed, though neither government has officially confirmed his death.

Insurgents have carried out scores of bombings in Peshawar in recent years, but attacks against American targets have been relatively rare because of extensive security measures by the U.S. government — ones that diplomats sometimes complain limit their effectiveness and ability to move around.

The U.S. said it would review its security procedures following Monday's attack, which was condemned by Secretary of State Hillary Rodham Clinton.

"We pray for the safe recovery of both American and Pakistani victims, and once again we deplore the cowardly act of suicide bombing and terrorism that has affected so many around the world," Clinton said during a visit to Indonesia.

The armored SUV in Peshawar was attacked as it traveled through a heavily guarded area of the city that hosts various international organizations, including the United Nations. It was unclear how the bomber penetrated the area and knew which vehicle to attack.

Pakistan's leaders and the head of its top spy agency, the ISI, have rejected claims by senior U.S. officials that the intelligence agency maintains links to the Haqqani network's leadership. Former chairman of the Joint Chiefs of Staff Adm. Mike Mullen said last year that the Haqqani network was a "veritable arm" of the ISI, and accused the agency of links to a brazen attack on the U.S. Embassy in Afghanistan.

The car driven by the bomber on Monday was packed with 240 pounds of explosives, police said. The blast ripped apart the SUV — tossing its engine at least 20 feet away — and started a raging fire. Rescue workers and residents rushed to put out the fire and pull away the dead and wounded. All that was left of the SUV was a charred mass of twisted metal with a red diplomatic license plate.

The SUV's driver, Atif Nawaz, said the blast knocked him out.

"When I came to my senses, I jumped out of my car and screamed, `What happened?"' said Nawaz, whose face and hands were badly burned.

The attack killed two Pakistanis and wounded 19 other people, including police who were protecting the Americans, said senior police officer Javed Khan.

Two Americans and two Pakistanis working at the U.S. Consulate in Peshawar were among the wounded, said State Department spokeswoman Victoria Nuland, who called the attack a "heinous act."

A U.S. official told CBS News on Monday that the two Americans injured in the attack are security personnel working out of the Peshawar consulate, and their injuries were not life threatening.

The charge d'affaires at the U.S. Embassy, Richard Hoagland, praised Pakistani security forces for saving the lives of the four consulate employees.

"In this dangerous world where terrorists can strike at any moment, we must all work together — Pakistanis and Americans alike — because we have a strong mutual interest in defeating terrorism," he said.

The worst recent attack on U.S. personnel in Pakistan was in 2010 when a suicide car bombing in the northwest area of Lower Dir killed three American soldiers who were training local forces.

A car bomb and grenade attack against the U.S. Consulate in Peshawar in April 2010 killed four Pakistanis, including three security personnel and a civilian. In August 2008, the top U.S. diplomat at the consulate survived a gun attack on her armored vehicle. Three months later, gunmen shot and killed an American in Peshawar as he was traveling to work for a U.S.-funded aid program.

Peshawar, located some 85 miles from Islamabad, has long been a vital hub for U.S. interests in the region. It is the capital of Khyber Pakhtunkhwa province and is located on the border of Pakistan's semiautonomous tribal region, the main sanctuary for Taliban and al Qaeda militants in the country.

Much of the funding that was handed to Afghans fighting Soviet troops in neighboring Afghanistan in the 1980s was channeled through Peshawar. The city's proximity to the tribal region made it an important place for American officials to be based following the Sept. 11, 2001, attacks that led to the invasion of Afghanistan. Many militants have used the tribal region as a base to attack U.S.-led forces in Afghanistan.