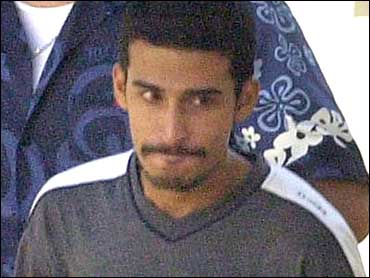 It's been just over four months since Alabama teenager Natalee Holloway vanished during a school trip to Aruba, and the three young suspects in her disappearance are no longer in custody.

CBS News correspondent Tracy Smith reports that a just-released audiotaped interview with one of the suspects holds some revealing details about what may have happened to Natalee.

In the months following Holloway's disappearance, investigators descended on the island of Aruba looking for clues. One of them was Jamie Skeeters, a polygraph expert, hired by the "Dr. Phil" show.

In August, Skeeters talked to Deepak Kalpoe on tape. Kalpoe, his brother Satish and friend Joran van der Sloot were the last people seen with Holloway.

This is how Deepak Kalpoe described Holloway:

"To tell you quite frankly, dressed like a slut, talked like one, too," he said. "Would go into a car with three strange guys, and her mother, claiming her to be the goody-two-shoes. Enough with this BS already."

When Holloway's mother, Beth Twitty, talked to The Early Show's Hannah Storm last week, she shared her suspicions about what happened to her daughter.

"I know this is really difficult for you to talk about, but you do believe that she was sexually assaulted. Is that correct?" Storm asked.

But Deepak Kalpoe had a different version. When an investigator asked if she had sex with all three, he responded, "She did. You'd be surprised how easy it was."

Twitty thinks it is a possibility that she could have been drugged. But if Hollway was drugged, Deepak Kalpoe said he did not do it.

"Let me ask you this," Skeeters said to Deepak Kalpoe. "I hear you can pay a bartender to slip a date rape drug in her drink."

"Have you heard that happen?" Skeeters asked.

"I haven't heard the bartender story," Deepak Kalpoe said. "I have heard the drug ecstasy. I've heard they slip that into drinks."

But Deepak Kalpoe offered no clues as to where to find Holloway.

"If I knew were the body is, I would tell them a long time ago," Deepak Kalpoe said. "Let them start the trial and get this over with. I don't care."

While the outpouring of support for Holloway's family has been tremendous, Deepak Kalpoe said he is increasingly alone.

"I don't have any close friends anymore. They are all gone," he said.

"Really, because of this?" Skeeters asked.

"Everything is empty," Deepak Kalpoe said.

But this may not be the last we hear from Deepak Kalpoe. Prosecutors still consider all three men suspects in the disappearance of Holloway.