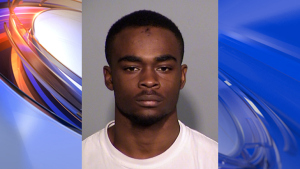 INDIANAPOLIS, Ind. -- Prosecutors say one of the men charged in the killing of an Indianapolis pastor's wife during a home invasion is also responsible for another murder and a rape, reports CBS affiliate WTTV.

Larry Taylor Jr. has already been charged with murder in the Nov. 10 murder of Amanda Blackburn. But officials say her death was the last brutal crime in a spree that began a week earlier, when a woman was raped at gunpoint in Indianapolis.

Then on the night of November 4th, a man named Rolando Gonzalez Hernandez was shot and killed during a robbery in the parking lot of Indianapolis' La Joya apartment complex. Marion County Prosecutor Terry Curry says prior to Gonzalez's death, Taylor met with friends and planned to rob a random victim.

According to court records, "Taylor told people he was going to 'hit a lick' and stated the 'lick' would be at the La Joya."

"Lick" is slang for robbery, according to a court affidavit, which adds that witnesses told police they heard Taylor "talking about robbing a Mexican, going through his wallet but getting only $10."

Six days later, Amanda Blackburn was killed inside her home. Jalen Watson, 21, is also charged in the rape, and with murder in Blackburn's death. Diano Gordon, 24, is facing burglary and theft charges related to the Blackburn home invasion.

The pair, along with a third man Diano Gordon, also allegedly committed two other random break-ins.

Prosecutors say all of the victims appear to have simply been in the wrong place at the wrong time.

"I don't think any of the victims were targeted but instead were random victims of very violent crimes," said Curry.